Imagine this: It's a not so distant future and robots roam the earth. Only, instead of crunching numbers, building structures or following orders, this peculiar breed of mechanism is autonomously creating art. Yup, one day robots may even be able to create "hand drawn" artworks better than you can, and not all that differently.

Meet Paul-IX, an automated sketch-bot who can outline a still life better than your high school art teacher. The gifted droid, which we spotted on The Creator's Project, is the brainchild of French artist and scientist Patrick Tresset, who's been creating similarly creative robots since 2011.

Tresset balances traditional robotic design elements like computer vision, artificial intelligence and cognitive computing with more human qualities, such as how we interact with art. After surveying critics, curators and artists, Tresset has vaguely calculated how humans actually look at art. From these investigations, he's designed an automated being that can autonomously interpret the world and attempt to represent it through artistic expression. 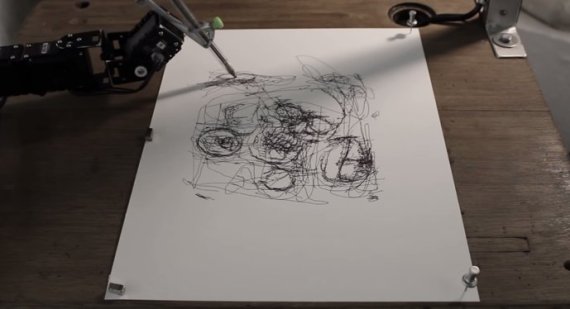 "The robots I develop are influenced by research into human behavior," Tresset writes in his self-titled book, "more specifically how human beings depict other humans, how humans perceive artworks and how humans relate to robots. The artifacts produced by these computational systems can also be considered as studies of the human."

Tresset specifies that his goal is to create a robot whose produced images have the same effect on viewers as human-made works. They do not, necessarily, have to create systems that draw exactly like a human hand would. The emphasis is on the created work's effect on the human viewer, whether it raises similar questions about the human condition to a man-made work.

How did Tresset become enmeshed in such a grueling endeavor? In fact, the project began after a particularly bad case of painter's block. "I embarked upon this particular quest following the loss of my passion for making art and in a certain manner, have attempted to create an artistic prosthetic to palliate this loss," he writes. "The autonomous systems I develop aim to replace part of myself, or more precisely systems than can act in the manner that I ideally want to act; systems that can draw how I want to draw.

What do you think, readers? Is a future where robots are created to act like humans more or less terrifying than the alternative? Let us know your thoughts in the comments.