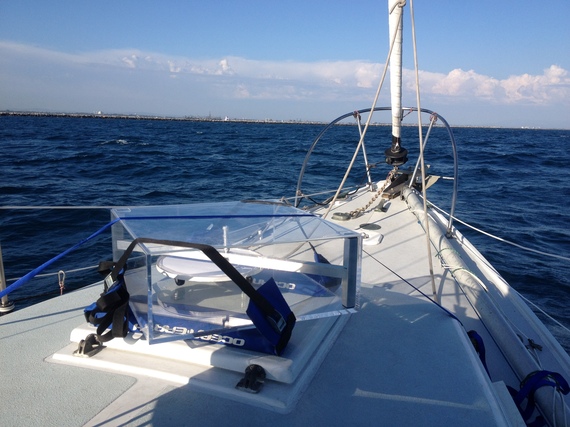 At one time the entirety of the worlds oceans hung in the skies as immense storm clouds. Churning about above the Earth's surface that existed only as molten magma sending any rain that fell back to the heavens. Once the surface began to cool and solidify the rains began to fall and settle. The oceans poured out of the skies for nearly forty centuries raining down approximately 300,000,000 cubic miles of water. Eventually the rains ceased and the Sun shone down on the Earth for the first time.

Since this event the oceans have never stopped moving.

This constant motion will be the focus of my newest body of work, a series of drawings, titled Drawn At Sea. These drawings will be produced during my time as an Artist in Residence aboard the sailboat Selkie under the direction of The Clipperton Project. I have created a drawing machine that will capture the greater movements of the ship and create a visual log of our motion as we sail through the Northern Isles of Scotland for the month of September.

The Clipperton Project is an International non-profit organization that promotes notions of exploration around the world. Pairing Artists, Scientists and Sailors together on sailing voyages in some of the most remote territories on the Earth. They have sailed more than 40,000 nautical miles in over 30 countries spanning 5 continents. The Clipperton Project engages communities with workshops and art exhibitions while recording and bringing awareness to changes in the natural world thus pursuing new ideas in the ways of the old world.

My interest in the expeditions of nineteenth century that included naturalists and artists led to the conception of this work. Sailing around the world they illustrated the flora and fauna of far off islands while mapmakers charted the coasts and seas. Their journals and records are influential in my desire to create a new log of the sea.

The Drawings and the Machine. 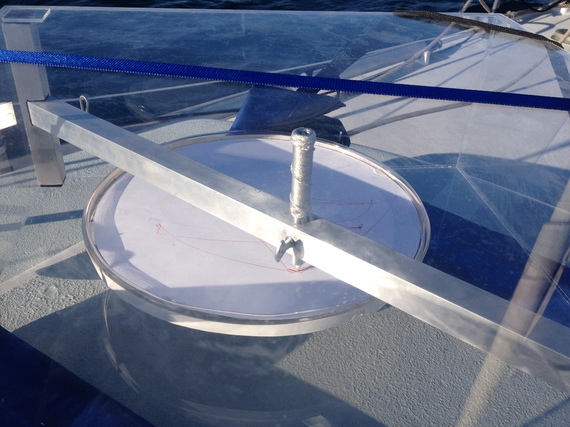 Each drawing will consist of 24 hours worth of movement, a full days record of the will of the Sea. Latitude/Longitude, Time and Temperature will be recorded on the back of each drawing and by the end of the expedition I will have completed a collection of drawings for everyday I was aboard the ship.

Inspired by the Harmonograph drawing machines of the 1800's, Drawn At Sea consists of a twelve-inch circular wheeled tray that rolls freely beneath a fixed pen inside a twenty inch squared box. As the boat moves the tray is set in motion before changing direction and repeating, creating a drawn log of the ships movements. Made of clear acrylic plexi-glass, aluminum, and a rope case of traditional nautical knot work. Drawn At Sea is as much sculpture, as it is a working machine.

Pendulum drawings will also be made recording the more subtle movements of the ship as the suspended pen sways above the papers surface. These drawings will be blocked out hourly at various times of the voyage.

The Journals.
While the drawing machine works I will be keeping journals of the trip, taking photographs and videos, many of which will appear in a series of essays and journal entries that will be published on The Huffington Post chronicling the residency and my thoughts. These posts will be similar to ones I did at the beginning of 2014 during my residency at the National Center for Contemporary Arts Kronstadt in Saint Petersburg, Russia.

The Voyage.
Leaving port from Kirkwall, Scotland we will sail north through the Orkney Islands to Papa Westray. Once we arrive at Papa Westray we will be working with the land art organization Land Art Papay before making our way back to Kirkwall and then on to the small island of Eigg. Sailing aboard the Selkie, everyone onboard will be part of the crew and assist with sailing the vessel. The Orkney Islands contain some of the oldest and best-preserved Neolithic sites in Europe. 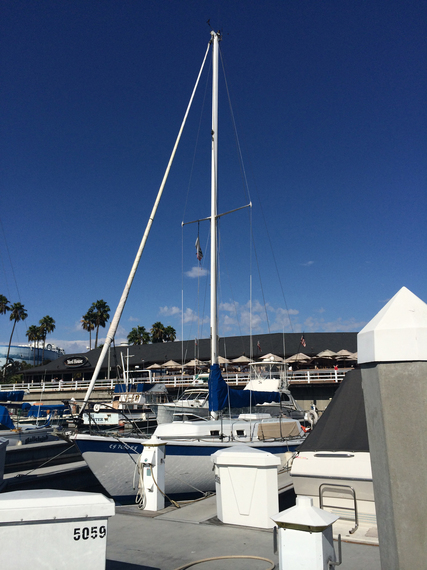 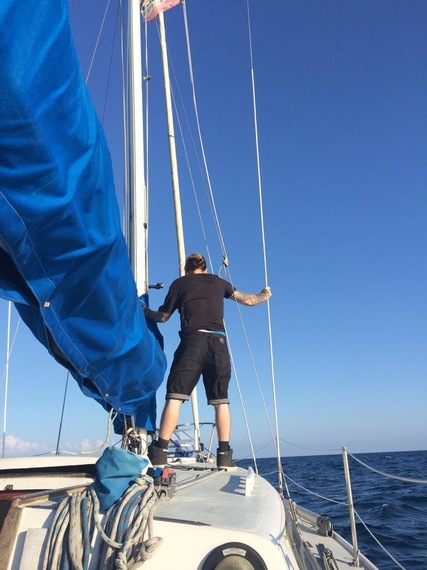 On August 20th we set out to test the drawing machine aboard the 34' sailboat Sea Dragon captained by Taylor Zepeda. I had reached out through social media looking for a sailboat for a test sail before heading out to Scotland. Dani Tull, friend and fellow artist put me in touch with Taylor. The stars were aligned it seemed as Taylor is preparing to sell the boat in mid September at which time he is moving to Wales, UK to attend grad school (MFA). Once aboard the Sea Dragon myself, Melody Koerber and Taylor motored out of Long Beach Harbor beyond the breakwater and into the open sea.

The first test - Blue (16:30-17:30) began on the table in the cabin, level with the waters surface and the calmness the harbor provided resulted in very little movement of the drawing tray. After relocating the machine to the stern of the ship sitting just behind the till more motion was recorded. 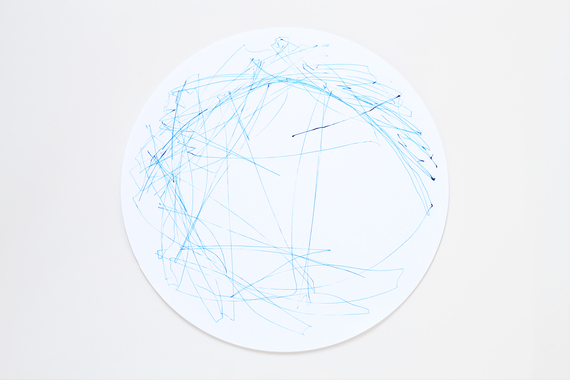 The second test - Red (17:30-18:30) drawing was done out on the open sea floating and bobbing under no power with the drawing machine placed just fore of the mast. This resulted in the most dramatic drawing as the ocean tossed us between its waves. The waters were fairly calm, but rolling enough to keep the machine in motion. 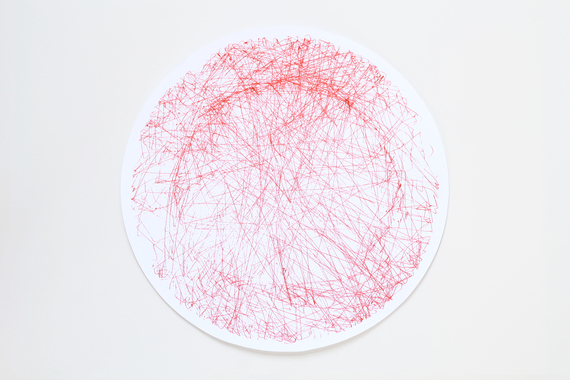 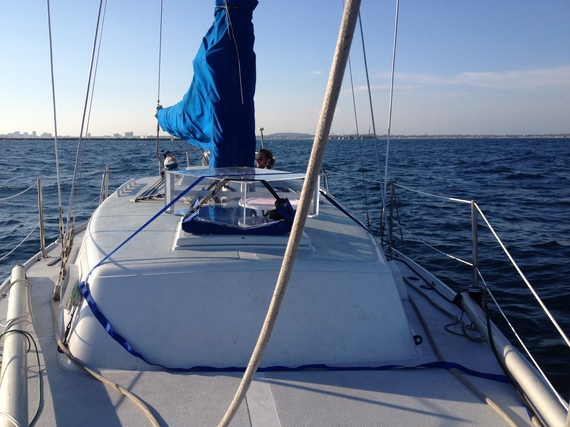 The third test - Black (18:30-20:00) drawing was done returning from the open sea under sail power. Sailing with only the Jib we cruised at about 5 knots tacking through the bay making our way back to port. Under sail the boat glided across the surface stable and strong, this created the quietest drawing of the set sending the tray in motion as we tacked. The sun was setting and small racing sailboats competed to the south of us as we slowed with the calming breeze and floated into the harbor and finally to dock. 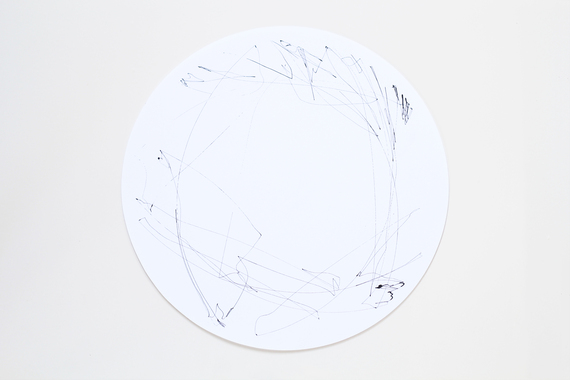 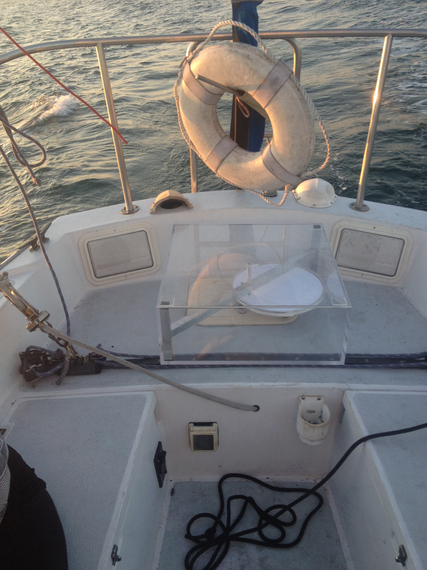 After the test sail I realized I needed to be able to tie the machine down to the boat in a more conventional way other than the ratchet straps I had employed during the test sail. I decided to make a half-hitch knotted net case with a 12 lead Carrick Bend base and Carrick Bend corners. Using traditional nautical knot work and common rope I was able to create a case that functions and remains true to the work itself. 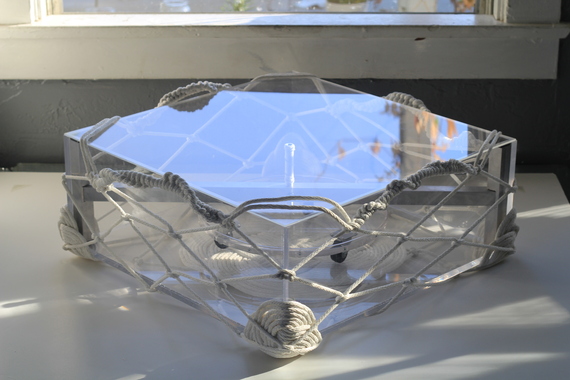 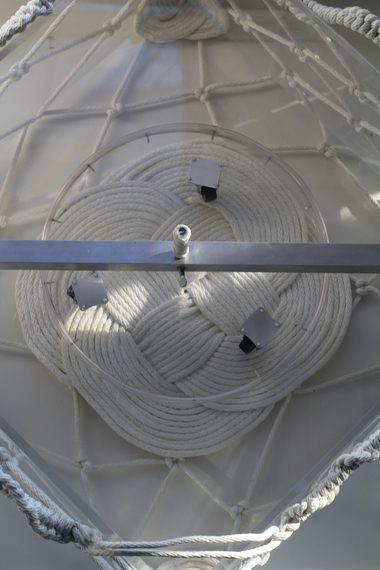 Drawn At Sea - The Test Sail from j.frede

Special Thanks to Dani Tull and Taylor Zepeda for making the Test sail happen.
danitull.com | taylorzepeda.tumblr.com

Extra special thanks to Melody Koerber for the countless hours of conversations & idea exchanges regarding Drawn At Sea.