Say hello to Dreadnoughtus schrani, a newly discovered dinosaur that was so formidable, it was named after a battleship that prowled the seas during the early 20th century.

"It is by far the best example we have of any of the most giant creatures to ever walk the planet," Dr. Kenneth Lacovara, a paleontologist at Drexel University's College of Arts and Sciences and the scientist who discovered the skeleton, said in a written statement. "With a body the size of a house, the weight of a herd of elephants, and a weaponized tail, Dreadnoughtus would have feared nothing."

The titanosaur's skeleton, which dates back 77 million years, was discovered in Southern Patagonia in Argentina, and unearthed over the course of four digs between 2005 and 2009. 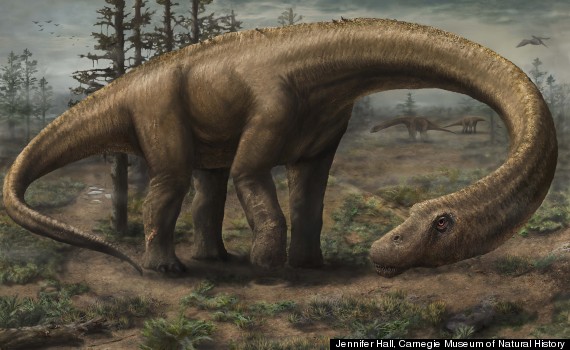 Rendering of the massive Dreadnoughtus schrani.

At 85 feet long and weighing 65 tons, Dreadnoughtus sets a new record as the land animal with the greatest calculable weight. (The record was previously held by Elaltitan, who weighed 47 tons.) That means that as an herbivore, Dreadnoughtus would have had to consume copious amounts of plant matter every day to become so "astoundingly huge," according to Lacovara.

"Imagine a life-long obsession with eating," he said, "Every day is about taking in enough calories to nourish this house-sized body." 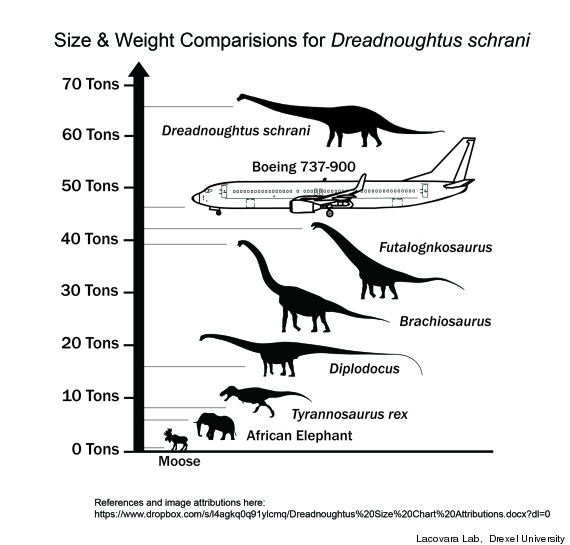 Dreadnoughtus schrani was substantially more massive than any other supermassive dinosaur for which mass can be accurately calculated.

The skeleton is also the most complete of its kind, comprising 43.5 percent of the dinosaur's bones. It contains nearly all bones from the forelimbs and hind limbs, most of the tail vertebrae and numerous ribs.

Lacovara and his colleagues have digitally scanned the dinosaur's bones and constructed a "virtual mount" of the skeleton. The scientists hope their research on Dreadnoughtus will shed new light on the anatomy of supermassive dinosaurs, and how they walked and grew. 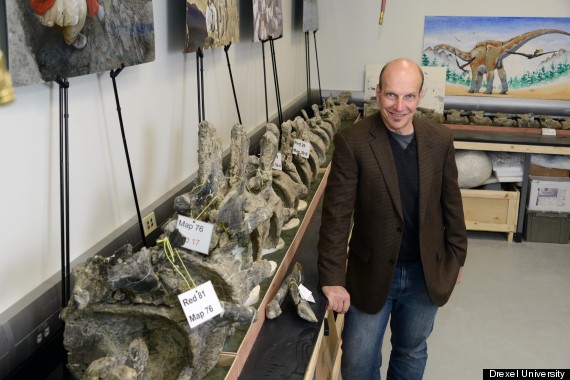 Dr. Kenneth Lacovara with the 30-foot tail of Dreadnoughtus schrani, stretching along the length of the wall and around the corner in his lab.

The research was published online today in the journal Scientific Reports.