The gigantic dinosaur known as Dreadnoughtus schrani -- believed to have been one of the heaviest land animals ever -- may not have been quite as big as we thought.

When Dreadnoughtus was discovered last year, paleontologists looked at the dimensions of its leg bones and estimated the dinosaur's weight to have been about 60 tons. But a new study casts serious doubt on that estimate.

"Estimating the body mass of an extinct animal from approximately 77 million years ago of this size from only its fossilized bones is extremely challenging and relies on the availability of certain data from living animals and modeling techniques," study co-author Dr. Karl Bates, a biology lecturer at the University of Liverpool in England, said in a written statement. "Using digital modeling and a dataset that took in species, alive and dead, we were able to see that the creature couldn’t be as large as originally estimated." 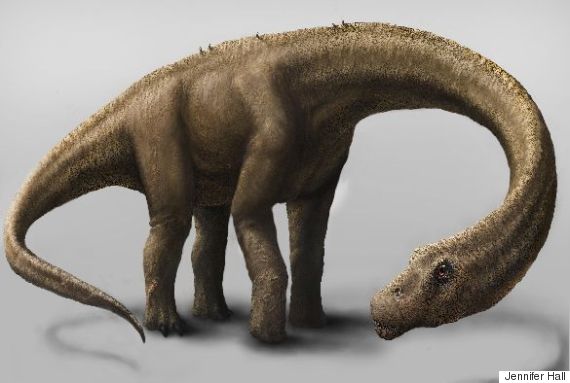 The researchers used a 3D digital model of the dinosaur's skeleton to estimate the volume and density of its bones, skin, muscles, fat, and other tissues, National Geographic reported. With the volume and density, plus corresponding data from similar animals alive today, the researchers then put the dinosaur's weight at 30 to 40 tons. That's about half as heavy as the original estimate.

"Our analysis suggests that only the lower estimates produced by previous methods are plausible," Bates said in the statement. "Estimates of 60 tons and above do not fit with our current understanding of the mass characteristics of living land animals."

But Dr. Kenneth Lacovara, the Drexel University paleontologist who discovered Dreadnoughtus, told Live Science that he wasn't convinced. Why? Because the new study used the volume of the dinosaur's body as a proxy for its mass -- and Dreadnoughtus' total volume is still unknown since only about 45 percent of its skeleton was recovered, Lacovara told Live Science.

"They're using a proxy that doesn't exist to estimate a number that can never be validated," he said.

One thing scientists seem to agree on is that Dreadnoughtus was breathtakingly big.

The study was published online in the Royal Society journal Biology Letters on June 10, 2015.