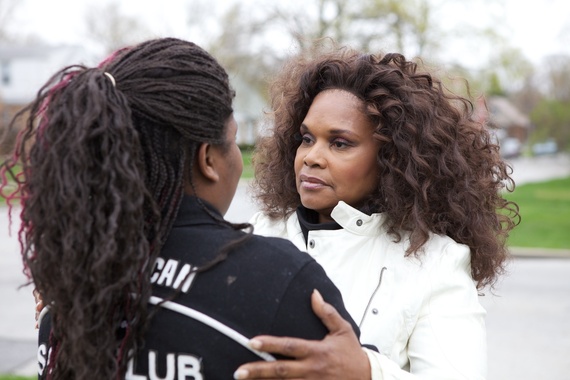 The story begins like many famous fairy tales. An orphaned infant is sent to live with a relative--a grandmother, this time.

But this is no fairy tale:

"Her grandmother was an alcoholic. Went to work every day, but (was) physically, emotionally, mentally abusive to her. Sometimes the people that her grandmother had keeping an eye on her were some of the people that molested her. They lived in an area where prostitutes walked up and down the street, and she used to watch these ladies, all the time. But these ladies looked kind of shiny. And all she ever wanted to be was shiny. She never wanted anything else. And she asked her grandmother one day, what are those women doing? And she said, 'Well, those women get in cars and take of their panties and men give them money.' She put her little dress on and her little cheap shoes and she went down to an area where she knew prostitutes were. And she got into the car with her first customer."

For Brenda Myers-Powell, who is both the girl in the horror story above and the indomitable inspiration for Dreamcatcher, an award-winning film from Kim Longinotto, the "happily ever after" did finally arrive, some 25 years later. But not until she had been shot five times, stabbed 13 times and beaten by a john who, "...drug [sic] her six blocks, tore all the skin off her face and her body."

"All she asked the Lord for was her face back. And to make her a lady," she tells a group of stunned high school girls in the film. "And today, that young lady stands before you. A lady with a face."

Myers-Powell is more than just a lady with a face. She's a lady on a mission, who spends her very long days reaching out to women for whom that "happily ever after" may never come.

By day, she counsels incarcerated prostitutes and "at risk" high school girls, serving up tough but unconditional love. By night, she drives Chicago's meanest streets in her Dreamcatcher Foundation van, offering condoms and compassion to women in "The Life," as it's called.

A co-founder of the foundation, her message to each woman is the same in the film, delivered with a bear hug and a loving smile.

"You got any dreams you wanna catch?" she asks. "When you get sick and tired of bein' sick and tired, you call us and we will help you."

And they do call. Day and night, her phone rings incessantly. And Myers-Powell answers, ready to do anything and go anywhere to save a woman in peril. Because, as she tells them all, whatever is happening to them has also happened to her. And she is living proof that they can change their lives.

But what happens to them is both harrowing and heart rending. In one scene, troubled teen girls in an after school program bare their souls with touching and terrifying honesty one after the other. And each story is more wrenching than the last.

"I done got beat so many times," one says. "My face was so beat up. I got scars all over my body. I don't trust no men at all."

Another story stops the show.

"I was nine when I got raped. By my cousin," she says. "He was nineteen, I was nine. It was a party, New Years Eve. You know how everybody get drunk? I was in the room sleep. And when I woke up I started screaming but nobody could hear me because the music was loud. He threatened to kill me. He put a knife towards my throat and he threatened to kill me."

An even more compelling--and bone chilling--moment occurs when a former pimp, identified solely as "Homer," visits the same group for a "no holds barred" discussion of The Life and how he found and lived it.

"Child molestation doesn't start just with females," he tells the girls. "At the age of 9-years-old I was molested by my auntie. We became lovers for many years. And what that did was it gave me a distorted sense of what love was."

Seeing his father beat his mother mercilessly gave him a few more erroneous ideas about love.

"Wasn't confused by him beating her up. What confused me was that she stayed," he says. "So that gave this little boy the idea that, 'Okay, if I beat up my girlfriend, it's okay.'"

To escape the hell his life had become, that little boy eventually created a mean, manipulative alter ego named "Fancy," who started pimping at the age of seventeen. And it's Fancy who answers a question about his women on what he calls the the "ho stroll."

Voice cold, eyes intense and menacing, he says the rule was, "Either get my money or suffer the consequences. And once you're in, you can't tell me when you're leaving. You leave when I say you can leave."

And as the room goes still, Fancy's eyes blaze as he offers one last piece of advice before letting Homer come back:

The tense silence proves the girls are listening. And that the message has been received.

Such is the power of Dreamcatcher, which begins a tour of select cities starting in Chicago on September 11th. A Sundance award winner in 2015, (Directing, World Cinema Documentary) it unfolds in "observational" or cinema vérité style, putting you "up close and personal" with its subjects and the world they inhabit.

"You touched my spirit," one sex worker tells her. "You give hope. And that's what we need out here."

So see the film. And then get in touch with the Dreamcatcher Foundation to find out how you can help them make more happy endings.

Photo credit: With permission of Dogwoof Ltd. 2015. All rights reserved