Following the first act of Porchlight's milestone production (now playing through May 22), I had the theatre tingles. My adrenaline was pumping. Gobsmacked. The weariness of a long workweek had evaporated - I already knew I had to see this a few more times.

Porchlight does good work. I've been an admirer of the scrappy and steadily rising group since I moved to the city 14 years ago. However, all their previous efforts didn't prepare me for this.

Every aspect -- from the cast to the cavalcade of costumes and wigs (by Bill Morey) to the fluid choreography (by Brenda Didier, who also directs) that keeps Tom Eyen and Henry Krieger's cinematic script and score pulsating forward -- kept me rapt.

But showy theatrics and sequins can only go so far. This intimate -- but by no means small! -- production hits you square in the gut because the performances demand such.

I'll start with Donica Lynn, an actress whom I've seen in other shows, but haven't been privy to her power or range until Friday night.

If would be an understatement to say that Lynn's Effie White surprised me. This isn't the dominating force that owns the stage from first entrance. Lynn's Effie is a softer, more sensitive creation, whose emotional core unravels, breaks and strengthens over the course of the evening. And when her big moments come, such as "And I'm Telling You," it's fully earned. Additionally, Lynn, a three-time brain cancer survivor, plays these moments as if her life depends on it -- and, hoo boy, do you feel it. Quite simply, it's been years since I've seen a performance so raw and ego-less as this. I still get chills just thinking about it.

With such a strong center, it would be easy for a lesser-equipped cast to become overshadowed. But that's far from the case here -- every performance is fully drawn and powerfully sung. I was most impressed with Katherine Thomas's Lorrell, a role that's typically diminished given it's the "C" story line. But Thomas doesn't suffer fools and slays during her scene work in act two. Additionally, while Deena Jones is certainly the lead, Candace C. Jones brings an inner fire and huge voice that plays well against the softer "pop" sound she's been regulated to. Her Deena is very much a woman trapped by her own stardom.

The men in this show also score. Evan Tyrone Martin, who's done some stellar work in recent Porchlight productions, explores his dark, dominating side as producer Curtis Taylor Jr. Eric Lewis gets down and funky as soul singer James "Thunder" Early. And as Effie's brother and songwriter, Gilbert Domally effectively grapples with the sacrifices of success.

Ok - enough. Just get yourself down to Stage 773 and see this damn show. You won't regret it. 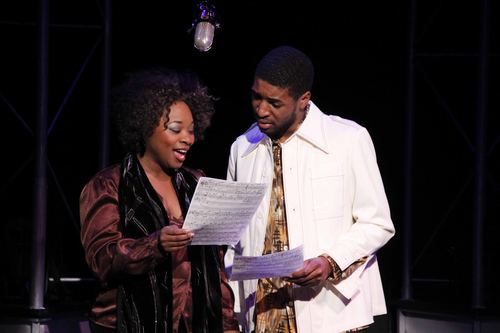