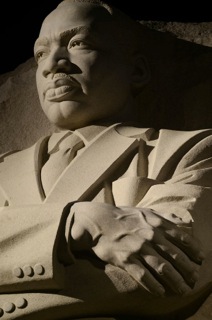 While there are fine essays and books written about Dr. Martin Luther King, Jr., detailing his words, speeches, history, and impact on American life, law and culture, few focus uniquely on the American psyche -- how "we" see, or don't see, Dr. King. Consider these six conflicting points of view, not only to resolve the facts and logic, but to witness how "we" dream about Dr. King.

1. Dr. King was a hero and it's natural for heroes to be admired. However, when a hero becomes a projection, an object instead of a subject, they become idolized. We see only the best in the person, we believe our own failings make us less worthy, and we deprive them of their humanity -- their pain, their loneliness, their need.

Mother Teresa, too, was a hero to many, which is why her posthumous autobiography was so startling. In it was revealed that "for the last nearly half-century of her life she felt no presence of God whatsoever." David Van Biema wrote in Time Magazine: "Come Be My Light is that rare thing, a posthumous autobiography that could cause a wholesale reconsideration of a major public figure." Some might think Mother Teresa was a hypocrite, but many were touched deeply, related to her doubt, loneliness, and emptiness, saw her as human, and felt that their own paths were validated.

June Jordan, African-American poet, essayist, and scholar, spoke perhaps in an equally startling way about Dr. King, saying, "He made big mistakes ... He did not abstain from whiskey, tobacco, or sex ... He committed adultery ... He did like him a little sugar in his bowl."[1] "But seeing King in his wholeness, she later adds, "I have come to praise him, and to try to follow after Martin Luther King, Jr., this Black man of God."[2]

As a projection we can idolize Dr. King as a real person, we can love him and ourselves.

2. We yearn for the light. Children wake their parents in the night saying, "I had a bad dream," and they respond, lovingly, "Go back to sleep; it was just a dream." But there is a psychic and social cost if we go back to sleep, if we don't face our shadow as a culture, especially when that shadow is the intractability of social injustice. Without grappling with the darkness, our moral conscience is not strengthened by the heat of opposition, and our ethics devolve into rules instead of cultivated wisdom and compassion.

Every year on Martin Luther King, Jr. Day, Dr. King's "I Have a Dream" speech reverberates in the ears of the American psyche. "I say to you today, my friends, even though we face the difficulties of today and tomorrow, I still have a dream."

But, as Michael Eric Dyson notes, we rarely hear Dr. King's other speech, made almost four years later, "In 1963 ... I tried to talk to the nation about a dream that I had had, and I must confess to you today that not long after talking about that dream I started seeing it turn into a nightmare." In fact, Dyson suggests a 10-year moratorium on the "I Have a Dream" speech, an intervention that just might compensate for our predisposition to romanticize, and thus disempower, the real Dr. King.

Dr. King wrote, "The strong man holds in a living blend strongly marked by opposites."[3] Let us hold King's words about the dream and the nightmare, so that we may grow stronger and truer as a nation.

3. To neglect Dr. King's legacy and role in confronting segregation would be a serious error. The Library of Congress writes, ""[H]e never got tired of trying to end segregation laws... He also did all he could to make people realize that "all men are created equal." However, in his interview on Jan. 11, 2013, Jonathan Kozol, perhaps the most pre-eminent scholar on education, race, and poverty, has noted, "America's public schools are more segregated today than they were when Dr. King was assassinated in 1968."

We must again grapple with both realities: the great power and change that grew out of the civil rights movement, as well as the frustration and failure to make certain strides. Cornel West, the great African-American scholar, dealt with the tension, saying "I'm full of hope but in no way optimistic."[8]

4. Everyone wants a piece of Martin Luther King, Jr. For example, Frances Rice, chairman of the National Black Republican Association wrote, "Dr. King...was guided by his faith and his Republican Party principles...He did not embrace the type of socialist, secularist agenda that is promoted by the Democrat Party today."[9] While David Garrow, Cambridge University Historian writes, "King was not only a Republican, he was well to the left of the Democratic Party of the 1960s."[10]

Psychologically speaking, Dr. King's name often is used to bolster the moral authority of people who fear they do not have it. ("Dr. King was on my side;" "No, Dr. King would have been on my side.") In my years facilitating conflict it became plain to see that people relied on the name and authority of another when they couldn't quite speak for themselves -their own passion, their own vision, their own hearts. In the long run, as opponents felt more empowered to speak their own "truth," conflicts were far more likely to resolve. Why? Because many people conflict not to be right, but to find their own voice, and speak their own truth. In furtherance of our democratic experiment, we all need to learn to find and use our voices an not only rely on the voices of others.

5. Conversations about color-blindness, including debates over affirmative action, often refer to Dr. King's statement, "I have a dream that my four little children will one day live in a nation where they will not be judged by the color of their skin, but by the content of their character."[11] For example in his 1992 book, Jared Taylor referred to King's speech arguing that advocating race-consciousness, especially by African Americans, "was a rejection... of the color-blind vision of Martin Luther King."[12] However, Jerome McCristal Culp, Jr. wrote in opposition to this kind of thinking in the New York Law, saying "people have created a mythic Martin Luther King, Jr., and associated him with a fictional notion of colorblindness.... us(ing) it get over the difficulty of race in a society where race is particularly powerful."[13]

While this is an important debate, and I myself side with those who hold that some are using King's words about colorblindness to blind them from real issues of race, this debate often ignores a basic psychological principal: when a white person tells a black person that skin color shouldn't be considered it's different than when a black person tells a white person that skin color shouldn't be considered. (The same is true for all dichotomies where power differences lurk in the background.) The essential difference is not only in the logic, but manifested and evidenced in the feelings, stories, and dreams of the individuals.

The issue of color-blindness is not only an objective question and cannot be fully resolved by the kind of logic that overcomes or marginalizes our feelings, especially those that arise between people defending groups with different amounts of power. If we are to deepen the racial conversation, we must affirm the validity of the experience of those involved - it is this very subjectivity that highlights the humanity of both sides and creates the possibility for a change of mind and heart.

6. What is democracy and how does it grow and unfold? How do we perfect our union? We live in a time where difficult issues abound, polarization is ubiquitous, and compromise is an endangered species. This kind of polarization was symbolized on August 28, 2010, the anniversary of Dr. King's "I have a dream" speech, when conservative television host Glenn Beck held the Restoring Honor rally, while not far away Al Sharpton, civil rights activist, held the Reclaim the Dream rally.

How shall we forge democratic empowerment out of this kind of disparity? Some will counsel seeking common ground or letting cooler heads prevail so that a form of compromise can be achieved. Others will stand strong for their position in hopes of resolving the debate with strong opinion, citing authorities, facts, or data. However, while both of these are needed, neither will bring us to a deep and sustainable resolution.

While seeking resolution may be motivated by a dream of truth, harmony, or even justice, it can easily come at the cost of marginalizing the very diversity and the difference that is the fundamental building block, the DNA, of our unfolding democracy. Al Sharpton and Glenn Beck represent the voices of many. Regardless of which side we come down on, beneath the content of their arguments, they channel a frustration, an insufficiently considered pain, and an urge for justice. In this way, together, Sharpton and Beck further the unfolding of our democracy, the dream of a beloved community.

Dr. Martin Luther King, Jr. was a man of G-d, to be sure, whose life changed the landscape of America and her budding democracy. But he also lives in the life of the American psyche demonstrated in how we refer to him, use his words, argue his position, and reflect on his legacy. It is my dream that understanding how we dream of Dr. King will nourish the soul of our country and this "beloved community."