Think of the dodo. This extinct bird, flightless and synonymous with idiocy, has always poked quietly, gently at some dark corner of our minds. When we first learn about the dodo's demise at the hands of colonial explorers, we often joke about its intellect (or lack thereof). I'm willing to bet that a number of you partook in the joking at the poor, maligned dodo's expense. I know I called my younger brother a dodo at least once, but most likely a few times. I'm also equally certain that many of you shared my quieter, subtler reaction to learning about the dodo's fate. Somewhere in my brain, amidst the clutter of childhood games and aspirations, between navigating multiplication tables and skinned knees, the dodo's death hurt me. This awkward bird, so ill-suited to the life that was abruptly thrust upon it, was gone. I couldn't visit the dodo at the zoo. I couldn't look at pictures of dodos, except for the slightly unsettling illustrations in the copy of Alice in Wonderland my parents kept in the den. Maybe you reacted the same way as I did, taking those few potshots at a sibling and chasing them with a brief moment of youthful introspection. Then I moved on. So did you. Life is movement; life is change. 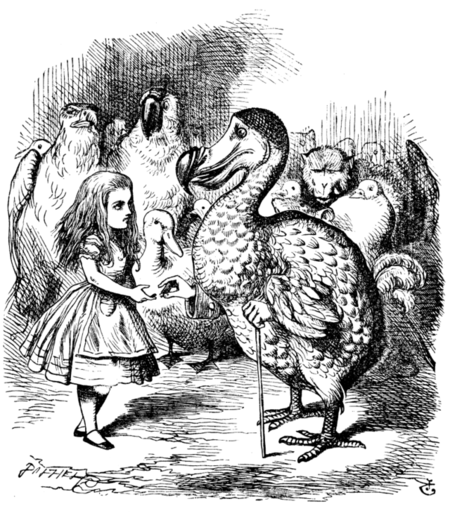 The recent news from the London Zoological Society is about change, and life. The population of wildlife on our planet has decreased by half over the last 40 years. Did you read that? Half. There are no words in any language that I could choose that would truly convey the magnitude of that statement. In order to achieve the proper effect, I'd have to personally punch you in the gut. The number of creatures we shared our world with has been cut in half. They are gone, and many have gone the way of the dodo. Those ill-equipped flightless birds weren't idiots after all. They were just early. The wind of change was blowing, and it happened to snuff out the dodo's flame a bit sooner than some of the others. But what about the top of the pyramid? What about humans? Surely we're in for something dire if half of our fellow travelers through life have checked out.

In the same 40-year period covered by the London Zoological Society's Living Planet Index, the population of humans on Earth has roughly doubled. Yes, that's right. During a time when half of the world's non-human creatures simply couldn't survive any longer, we humans kept right on growing. We have made our lives healthier and more convenient. My question, then, is why haven't we done the same for our friends in the animal kingdom? We cannot survive in a vacuum. We cannot survive without them, and without the myriad ways they add real, tangible benefits to the environment. You don't have to be an animal lover or a tree hugger to understand that spiders eat insects. You may not want them in your house, but I guarantee you'd enjoy being swarmed by a completely unchecked mosquito population even less. We need spiders. We need insects too, but we need them in balance.

There are many approaches to finding this balance. Some groups study animals in their natural settings, while others provide sanctuaries for animals displaced due to deforestation, civil unrest, or the wildlife trade. Education efforts in developing countries are growing, and the developed world has begun to prioritize responsible production of food and natural resources. Nonprofit organizations dedicated to preserving various animals and environments are gaining traction. I co-founded one, Blueprint Earth, which is dedicated to understanding everything in our planet's various environments the way they are right now. Our first environment is the Mojave Desert, and we are cataloging everything in one section of it. If we don't create this record of the bugs, the bushes, the plants, the birds, the springs, the bighorn sheep, the toads, the cacti, the rocks, and the wind and sun that touches all of them, we will never have this information. We will never understand how this environment truly worked as a living system. Once we've finished our survey of the desert, we'll move on to the tundra, the prairie, the rainforest, the oceans, and more. Someone needs to understand how the world around us works, and it's a much bigger project than any one person's lifetime can handle. Life is change and movement, and we need snapshots of the here and now for our children, and for their children. The dodo didn't get a snapshot. He is only an illustration now.

I'm not asking you to accept climate change as fact. I'm not maligning humanity as the culprit behind the massive die-off of half of Earth's creatures. Politics, religion, and accusations have no bearing on what needs to be done. What I am asking you is to listen to that small poke in the back of your mind, the one that you feel when you read the tragic news delivered by the Living Planet Index. And yes, this is a tragedy. What else can you call the fact that Nepal, a land once populated by 100,000 tigers, is down to 3,000? More people show up to watch minor league baseball games.

Listen to the poke in your brain, your conscience, your stomach, or wherever it manifests. It is telling you something, passing along a primordial message. It is reminding us that we are not meant to survive alone. We are not here to outlast every other creature. That is not why we've struggled so hard to make life better for our kind. We have struggled for millennia to find that balance, that perfect equilibrium between wild things and civilized ones. I challenge you to make a difference for the next 40 years. Start conversations about the world around you. Make a firm commitment to help scientists and students learn about the planet. It doesn't matter if you hate math, or if chemistry is your mortal enemy. Someone out there is trying to piece together the puzzle of our world, and they need your help. After all, you live here too. You and the 3,000 tigers in Nepal. Well, at least they're here for now.

I can't promise you that this will save the world as we know it. The world may not even need saving, really. As a much more eloquent person than I once said, "nothing gold can stay." We don't need to spend our lives mourning the dodo. We do, however, need to hold him in the back of our minds and use his gentle prodding to propel our efforts to understand the world. After all, knowing tigers are out there is what children's dreams are made of.