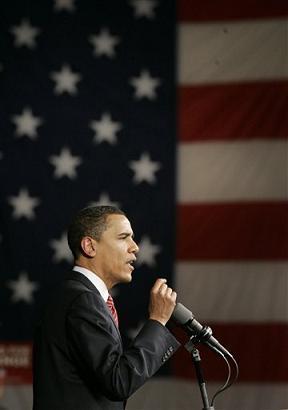 Barack Obama had two unexpected boons this weekend: He ran away with South Carolina, beating Hillary Clinton by a whopping 28 points, and he received a singular, unexpected endorsement. Caroline Kennedy, daughter of President John F. Kennedy and something of an icon in her own right, expressed her support for Obama in a New York Times op-ed that shot to #1 on the Most Emailed List almost as soon as it went online Saturday night. It's still there.

Hillary Clinton was endorsed by the New York Times itself but this, I think, means far more. This is the endorsement — the last living heir of JFK and his legacy saying that yes, Obama is like him, and here's why. Kennedy all but says that Obama is her JFK — an astounding and heartfelt statement coming from a national daughter that carries great political and emotional weight.

The obvious evidence of that weight has been the endorsement of her uncle, Senator Ted Kennedy, shaken loose from neutrality yesterday and formalized today in a joint announcement with his niece. From the moment it broke, the chatter — online, on cable, on the Sunday talkers and on all manner of Beltway blackberries — centered around what Ted Kennedy, whose endorsement represented the next big enchillada, would do. Kennedy, along with Rahm Emanuel (who is officially neutral but also officially from Chicago), came out last week urging Bill Clinton to cool it in his campaigning against Obama, but other than that he has striven to appear neutral (despite being lobbied heavily to support Obama in private). Both the governor of Massachusetts, Deval Patrick, and Kennedy's colleague in the Senate, John Kerry, had already endorsed Obama (and Ted Sorenson signed on a while ago), but this made it far more personal. 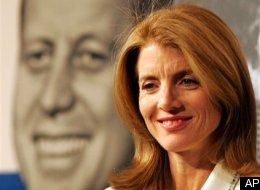 endorsing Obama, he has plans to campaign for him "aggressively" — which lends enormous credence to his candidacy via the iimprimatur of the wise elder statesman, countering the inexperience meme pushed by the Clintons. Meanwhile, Bobby Kennedy's daugthter Kathleen Kennedy Townsend piped up yesterday, asserting her support of Clinton, along with that of brother Robert Jr. and sister Kerry (though mother Ethel sides with Obama); Ted's son Patrick Kennedy subsequently declared for Obama. Quite the trail of dominoes, falling thanks to a single one op-ed. Ironically, even though it contradicts (and possibly vitiates) the NYT's own endorsement, it is still an op-ed that seems like it could only have run in the New York Times.

Yesterday, the focus swiveled to Ted Kennedy as soon as the news broke about his endorsement, and today as he officially announces the chatter is now about what this will mean for the race and what a body-blow it is to the Clintons. But to me, the op-ed still remains a stunning document and important in its own right for the statement it makes about Obama — and Bill Clinton.

The whole op-ed is thoughtful and moving and quite poignant, especially since Kennedy speaks as someone who never really knew her father to be inspired by him personally, but who has had a life of having his legacy impressed upon her by people who knew, loved and were moved by him. The crux is the final paragraph, which becomes the new pro-Obama gold standard:

I have never had a president who inspired me the way people tell me that my father inspired them. But for the first time, I believe I have found the man who could be that president — not just for me, but for a new generation of Americans.

This is an incredible statement on two fronts: First, it carries enormous emotional weight from Kennedy, who speaks about her father's impact from outside it, as someone who has spent a lifetime receiving testimonials but not herself bearing witness. Now, for the first time, she feels it. That is very powerful. Second, it strikes at the heart of the Clintons: Never mind that she doesn't make Kennedy feel that way — he never made her feel that way, either. All of those things her father was, the bringer of hope and inspiration — she had to wait until now to feel it. That includes eight long years of a Clinton presidency.

Kennedy's endorsement is all the more significant because it's her first. She makes clear at the top that she does not do so regularly (only for uncle Ted Kennedy in 1980, by all accounts), but that she is choosing to do so now — because it's a special time, and this is a special candidate.

What makes the Kennedy op-ed just as poignant, I think, is how gracefully and respectfully she handles the Clintons, and to a lesser extent John Edwards. "It isn't that the other candidates are not experienced or knowledgeable," she writes. "The candidates' goals are similar. They have all laid out detailed plans on everything from strengthening our middle class to investing in early childhood education." Says Kennedy: "But this year, that may not be enough." She's 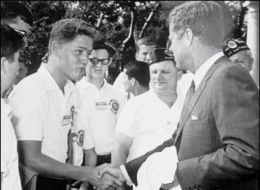 giving them their due — any other time, you might have been a great president. But this time calls for more. That probably will not take the sting out of it for the Clintons — Bill Clinton's always rather fancied himself as JFK-like, and there's that famous photo of the two of them in the Rose Garden (the symbolism of which was also cited by Karen Tumulty and Maureen Dowd yesterday on Meet The Press). Nor will it take the sting out of her note about Obama's "dignified and honest campaign" or the non-fairtyale of his Iraq war vote. But she does make it clear that her endorsement rises above the politics of an ordinary campaign, and it's because of an extraordinary candidate.

In this way, Kennedy picks up on all of the narratives of the campaign thus far — Hillary's experience, the Iraq war vote controversy, the nastiness of the campaign, the split within the party. It also subtly validates Obama's Reagan comments (there are specific times when the country is ready for change, and this is one), as well as gives a gentle pass to the media for their enthrallment with Obama (it's not just you pushing a rock star, this is real). It is a document that neatly sums up all that has happened thus far, and just as neatly dispenses with it, saying, yes, but going forward it needs to be about more.

The conventional wisdom seems to be that Kennedy one-two punch seems a devastating blow for the Clinton campaign, a formidable machine, to be sure, but coming up against some serious extenuating circumstances here. The machine will roll on, but who will roll with it? These twin endorsements — both political, but so personal — provide political cover for picking sides. For those in the intelligentsia who remain undecided, poised legitimately between the Clinton experience and savvy and the nascent promise of Obama, this could well make the difference.

In a campaign with many turning points and genuine, stunning surprises, this may be the one we look back on as the real game-changer, the tipping point that kept the swinging pendulum of momentum on side with Obama. (I write this, by the way, with the Kennedy-Obama press conference at American University in the background, and if I had any doubt, well, I don't any longer.) Of course, this is the last campaign about which to make predictions — especially going into Super Tuesday with the Clinton machine — but this is not just any op-ed. However people feel about JFK (and whether it actually did take Johnson to pass civil rights legislation), he is a powerful political symbol in this country, and the endorsement of his last living child does matter. It makes me think of a quote by Victor Hugo: "One can resist the invasion of armies, but one cannot resist an idea whose time has come." Well, never say never — Victor Hugo never met the Clintons.

Related: The endorsement of Mitt Romney by Dick Cheney's daughter? May not pack quite the same punch.