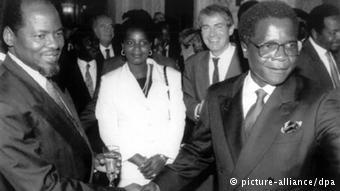 Sometimes it's the little things that can make a big difference, especially during tense moments when the stakes are high. For example, during the negotiations to resolve the 16-year-long Mozambique civil war, which killed over one million people. The warring factions, the Front for Liberation of Mozambique (FRELIMO) and the Mozambique Resistance Movement (RENAMO), met in Rome in the early 1990s. Dennis Jett, who served as Ambassador to Mozambique from 1993-96, recalls how one small gesture was tailor-made for a successful outcome. He was interviewed beginning March 2011 by Charles Stuart Kennedy.

Read other Humorous Moments and other Moments on Africa.

"It was a winner-takes-all-and-loser-gets-nothing situation"

JETT: The country of Mozambique had an economic output roughly equivalent to a town of 50,000 in the United States. So it was a very small economic pie and you either won political power or you were out of luck.

In a country that poor, there isn't anywhere else to go. You can't go off to the American Enterprise Institute or the Heritage Foundation or some right-wing think tank if you are a Republican and the Democrats come to power or go off to the corporate sector or academia or somewhere else.

It was a winner-takes-all-and-loser-gets-nothing situation so we had to go to some extraordinary lengths to keep both parties in the process and implementing it. The international community gave a lot of money to RENAMO so they could become a political party.

One illustration of that during the 1992 negotiations in Rome, the RENAMO people came to the Italians and said "We are not going to come to the negotiations tomorrow."

The Italians said, "Why?"

And the RENAMO delegation said, "We don't have any clothes. We came straight out of the bush so we have our beat up military uniforms and all the government people are going to show up in suits. We are just not going to feel good about that."

The Italians said, "OK, we'll take you out and we will buy you suits."

So they took the RENAMO delegation out and bought them suits.

I often wondered if the United States government were faced with a situation like that it would probably be powerless to do anything because we don't have any money to buy suits for foreign delegations.

In any event, with their new suits RENAMO felt sufficiently empowered to show up and negotiate.