In May 1977, the first in the Star Wars film series was released and quickly became a global phenomenon. Described as an "epic space opera," the movie franchise became incredibly popular and has had an impact on modern popular culture with its storyline, filmmaking, famous lines, but also for all the costumes featured in the films. The Discovery Times Square recently opened Star Wars and the Power of Costume: The Exhibition in New York City. 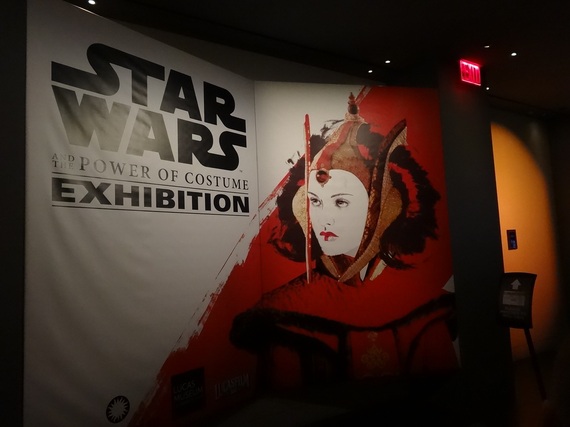 "Craftsmanship and artistry in costume design are valued creative components in the Star Wars saga," said George Lucas. "The detailed precision of a design can be as bold a measure of storytelling as words on a page, leading to the truths at the core of a character, situation or shared history" and showcases the unique costumes made for the movies.

Presenting over 70 of the most iconic, hand-crafted costumes and dozens of artifacts from the Lucas Museum of Narrative Art, the exhibition is a partnership between the museum, the Smithsonian Institution Traveling Exhibition Service and Lucasfilm. These are not replicas or recreations, but the actual costumes worn by the actors from the first six blockbuster Star Wars films. As an added bonus, on display are costumes from the upcoming film, Star Wars: The Force Awakens, the first film in the Star Wars sequel trilogy, announced after The Walt Disney Company's acquisition of Lucasfilm in October 2012.

An introductory video sets up the visitor before a sliding door opens leading into the first of 13 galleries. The majority of the galleries displays are from the first six Star Wars films, with a heavy emphasis on Natalie Portman's character Padmé Amidala. The story, which is told through nine "chapters," is organized in the following order: Hallway of Inspiration and Design, Jedi vs Sith: Form, Function & Design, Droids, Royalty, Stormtrooper, Military, Galactic Senate, Outlaws & Outsiders, Padme's Journey, Padme's Funeral, Yoda, Darth Vader and The Force Awakens.

In the Jedi & Sith room there is Qui-Gon Jinn's Jedi Robe worn by Liam Nesson, Darth Maul's Sith Robe, Obi-Wan Kenobi's Jedi Robe worn my Ewan McGregor and other Jedi costumes. According to one of the placards, every principle Jedi needed multiple versions of their costume due to not only wear and tear, but also shrinkage. When the vintage wool cloaks would get wet, they would quickly shrink and would require a new one for each take. 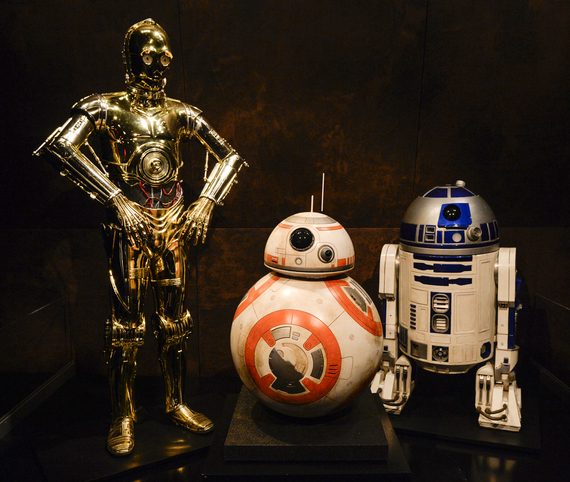 Everyone's favorite Droids are represented -- C-3PO, R2-D2 and from the upcoming The Force Awakens BB-8. Across from the trio is a large image of "Maria" from Fritz Lang's 1937 silent film -- Metropolis. It's easy to see how "Maria" influenced Ralph McQuarrie's design.

We are introduced to Queen Amidala in her very regal senate gown surrounded by various handmaidens ready to attend to the Queen's every whim. On the opposite side of the room shows a small, but beautiful display of Queen Amidala's wardrobe including the black gown Portman wore in The Phantom Menace. The designer did not like the way the dress was coming out on paper so she scribbled all over it in black. When George Lucas saw the drawing he thought it was lace and like it.

Like a funhouse, a small mirrored room has one full sized Stormtrooper and more than two dozen Stormtrooper heads. The effect gives the illusion you are surrounded by hundreds of soldiers. 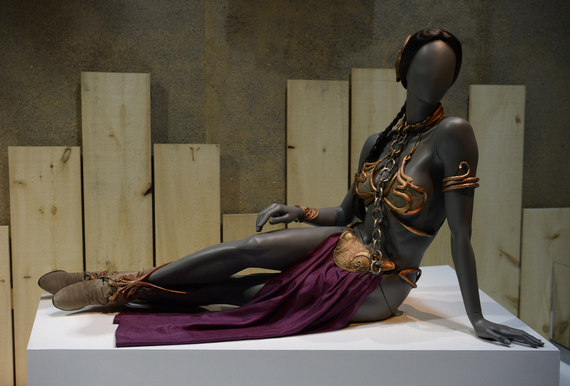 Once you pass by Hans Solo in Carbonite and some other cool props, you turn the corner and before you is one of the most iconic costumes of the films. Princess Leia's slave bikini. Interestingly, the costume was inspired by a number of actresses from the 20s, 30s and 40's including Myrna Loy's native dancing girl in The Desert Song and Yvonne De Carlo's character in Slave Girl. The exhibit explains that although "those early vamp characters functioned largely as sexual objects waiting to be molded by a male character" Lucas's idea for Princess Leia was not for her to be molded, but be a bit exposed and humiliated and then turn the tables on her captors.

Another runway fashion show begins in with a gorgeous display of Padmé gowns. Some of these would be right at home today on a Hollywood red carpet. Included in this collection, but set apart in its own vignette, is the wedding gown Padmé wore when she married Anakin at the end of Episode II. In Italy, Trisha Biggar saw an antique 100 year-old bedspread in a thrift store and knew it would be perfect for her wedding dress, however there wasn't enough material for a full dress so Biggar worked with Sandra Fullerton to piece together sections of the bedspread on to silk tulle with the addition of 300 yards of braid. The night before the wedding scene was shot, Biggar looked at the dress and thought it needed something extra. So her and her team individually hand sewn pearls all over the dress and veil.

Taking wedding vows literally -- 'til death do us part' -- the exhibit takes you from Padmé's wedding to her funeral. Small lanterns hang from the ceiling as if they are floating the ceiling, and utilizing the same technique as the Stormtrooper's exhibit, small mirrors multiply the lanterns and their beautiful glow. 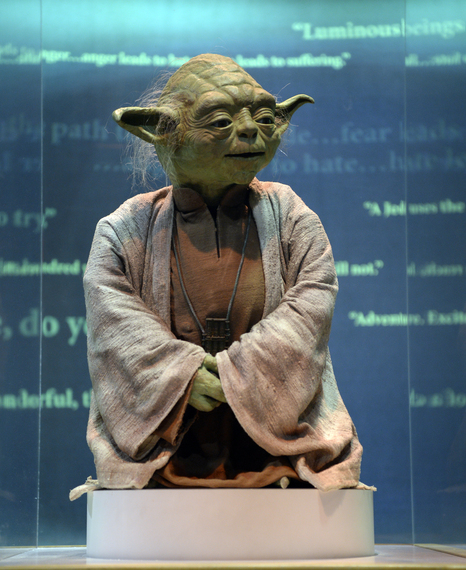 Commanding his own room, and rightfully so, is Yoda. The puppet is displayed in a glass case with a curved, lit background displaying some of his most famous quotes. Yoda is facing in the direction of the next room and in there -- facing in Yoda's direction -- is Darth Vader. George Lucas told artist Ralph McQuarrie that he wanted Darth Vader to look like a "dark lord riding in the wind with black flowing robes and a large helmet like that of a Japanese Samurai with a silk mask covering his face." 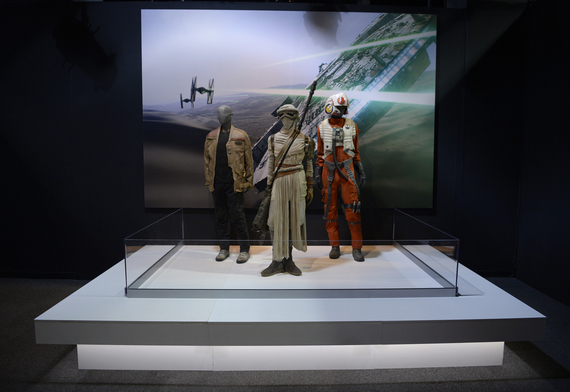 The exhibition, which uses a timed entry reservation system, features more than just clothed mannequins; there are descriptive placards, digital flipbooks and two short films that allow visitors to explore Lucas's thought process in depth, as well as the actors, costume designers and other production personnel. There is also an added bonus at the end -- visitors get to put themselves in one of the iconic costumes through a unique virtual experience. Once you get the hang of it you can really have fun with your virtual character.

The exhibit appeals to more than the hard-core Star Wars fan and is a must-see for everyone. There is something here for movie buffs, fashionistas, history buffs, kids and adults.

Star Wars and the Power of Costume: the Exhibition is open now through September 5, 2016. For individual tickets and venue hours, visit www.discoverytsx.com. Advanced ticket prices: $20.00 --$27.50.