Not only is this crass and offensive, it's also a bad business model.

A pizza place in an Illinois college town stirred up controversy after it offered free pizza to women who showed their breasts to employees. Critics of the offer lashed out online, causing the late-night eatery to shut down its Twitter and Facebook pages.

Drew's Pizza in Champaign, Ill., a popular place for college kids from nearby University of Illinois to fill their bellies after going to the neighborhood's many bars, came up with the not-so-brilliant idea to give away free pizzas to any woman who lifted up her shirt.

As employee Brice Hartman creepily explained to local ABC affiliate WICD-TV, not only do Drew's employees enjoy it, but all the other customers get to watch, too. "Somebody comes in says, 'Hey I'm drunk, if I flash you, can I get a free pizza?' Yeah sure, why not? It makes everybody here happy. It makes the crowd happy," Hartman told WICD.

Drew's (which for some reason puts alfredo sauce and sour cream on its pizzas, and which reviewers have described as "kind of sketchy looking") might have gotten away with the stunt if it hadn't put out an open call for "more tits" on Twitter. 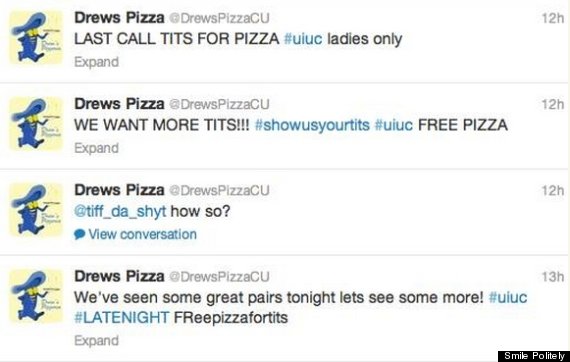 The tweets were soon noticed by local news and culture blog Smile Politely. Soon, national and international sites were picking up the story, too.

Giving away free pizzas in return for a split-second glimpse of someone's breasts makes for a poor cost-benefit ratio. Worse, it's a chauvinistic way to treat female customers, as online commenters haven't hesitated to point out.

"I don't know if you have ever been on Green St. at 2 in the morning, but there are people that cannot stand up straight, much less make the sound decision to lift up their shirt or not for free pizza," wrote commenter Peggyfioretti on Smile Politely.

Drew's Pizza did not answer repeated phone calls from The Huffington Post. We're guessing they're spending the day wallowing in shame.