Alcohol is a depressant. This, we know. But the immediate effects of a few cocktails can feel far from depressing. And for someone who's already down and out, the mood-enhancing effects of alcohol can prove pretty tempting... hence the prevalence of booze as a form of self-medication. Check out your local bar, and there are bound to be more than a few folks occupying booths and bar stools who suffer from clinical depression. 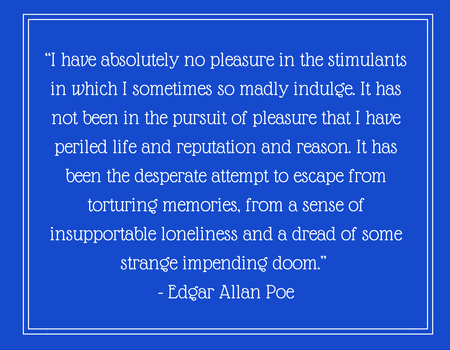 Compounding this issue is the fact that binge drinking is, um, everywhere. Forty percent of college students report the behavior, and according to the CDC, one in six U.S. adults binge drinks about four times a month. The CDC's list of health issues associated with binge drinking is sobering (so to speak), and includes unintentional and intentional injuries, alcohol poisoning, sexually transmitted diseases, unintended pregnancy, high blood pressure, liver disease, neurological damage and sexual dysfunction. Nobody needs those on top of depression, now do they?

For many years, I, like lots of others, used alcohol as my socially acceptable method for feeling better. The problem was, the aftereffects were unimaginably worse than the temporary high. After a night of heavy drinking, my anxiety and depression were amplified to the extreme. When I cut out excessive boozing, things got better. A lot better. And that's no surprise, considering what the research suggests about drinking and depression.

Here are some eye-opening facts about the deadly duo:

Alcohol abuse and depression frequently go hand in hand.
Stats suggest 30 percent to 50 percent of people with alcohol issues (at any given time) are also suffering from a major depressive disorder. Makes sense, since alcohol is an easy way to self-medicate. Unfortunately, drinking does more harm than good as far as mental health is concerned.

Heavy drinking makes mental health issues worse.
According to the American Psychological Association, "Alcohol abuse and alcoholism can worsen existing conditions such as depression or induce new problems such as serious memory loss, depression, or anxiety." Not good.

Alcohol is often associated with suicidal behavior.
Scary, right? According to a study by the NIH, "Alcohol abuse may lead to suicidality through disinhibition, impulsiveness and impaired judgment, but it may also be used as a means to ease the distress associated with committing an act of suicide." Basically, alcohol gets rid of those pesky inhibitions that might otherwise stop us from doing something regrettable.

Alcohol issues tend to run in families.
In the book, The Noonday Demon: An Atlas Of Depression, Andrew Solomon writes,
"People with family histories of alcoholism tend to have lower levels of endorphins- the endogenous morphine that is responsible for many of our pleasure responses - than do people genetically disinclined to alcoholism. Alcohol will slightly raise the endorphin level of people without the genetic basis for alcoholism; it will dramatically raise the endorphin level of people with that genetic basis." Well, that accounts for a lot, now doesn't it?

Drinking while taking antidepressants is bad news bears.
According to the Mayo Clinic, it can worsen symptoms and side effects, cause drowsiness, impair alertness and even potentially cause a dangerous reaction depending on what kind of meds you're taking.

I'm not here to tell you whether to give up drinking forever or not. I'm not a clinician or a doctor, I'm just someone with some personal experience in this arena. For some, abstinence is key, while moderation management works for others. Your treatment plan should be as individual as you are.

But this much is clear: drinking and depression aren't a good combo. So if you're having trouble with either or both, ask for help. You're not alone, trust me. These problems are much more prevalent than most people realize.