Knowing that we went to Georgia for our wine business, friends inevitably ask us, "So, how was the wine?" My response: "Unlike anything I've ever tasted before."

Georgia lays claim to having the world's oldest wine culture. At one famous archaeological site, residue over 8,000 years old was found. Because of this, Georgians proudly boast that they're on their 8,000th vintage. As a serious student of wine, I was eager to learn more.

My husband, whose in the wine business, and I were invited to Georgia by the government on a trade delegation. These delegations can always be unruly, but this one was particularly so. Out of the 125 members, 80 percent were Chinese. They drank...a lot. Our two official gala dinners ended with very drunken businessmen singing Scottish songs like "Auld Lang Syne" and "Loch Lomond" in Cantonese. Suffice it to say, they were fun parties.

Unlike the deadly serious ones I've attended in Italy and Argentina, our delegation's organized wine-tastings were as rowdy and memorable as the dinners. The first took place in a four-mile-long tunnel the Soviets built as a bomb shelter. After being abandoned in the early 1990s, it was rediscovered by a local winemaker -- who rightly thought it would make the perfect wine cellar and a unique place to hold events. 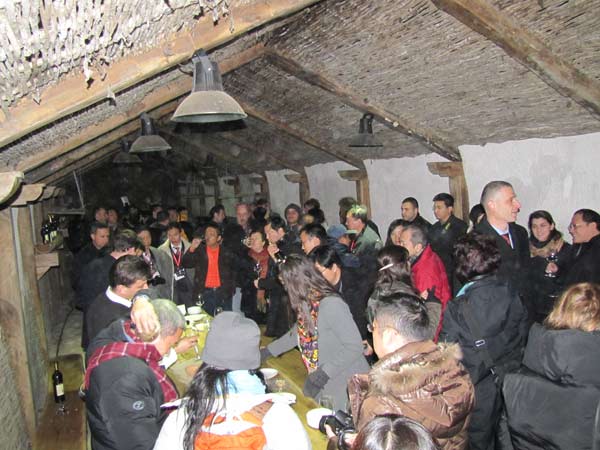 After a two-hour drive through miles of snow-covered vineyards, 125 of us professional wine-tasters eagerly dismounted our tour buses at the mouth of this large, dark tunnel. It was well below freezing outside, but with every step we took into this ex-bomb shelter, the warmer it got. By the time we hit the first rack of wine, about a half-mile into the heart of the mountain, it was a "warm" 55 degrees. Perfect cellar temperature!

As our group approached the tasting table, it became very clear that our hosts weren't prepared for a group of our size. Their small staff and one tasting station were quickly engulfed. We Americans and Europeans (who are less comfortable in crowds than our Chinese colleagues) hung back and observed the frenzy. After the group thinned out, we stepped up and enjoyed a thorough (and less rushed) education.

The exhausted winemaker poured two wines side-by-side. I picked up the first, swirled, sniffed, and took my first taste. My husband and I glanced at each other. Since we taste together so frequently, we've created a secret language of looks and body language to communicate our general impressions. Once I saw my husband sniff and take only one tiny sip, I knew we thought the same: The wine had gone bad. It was brown and tasted strongly of walnuts and cooked fruit -- sure signs of oxidation.

The next wine we sampled was much different. From the closing of his eyes and the dipping of his nose deeper into the glass, I knew my husband and I were both very impressed. Bright, crisp, and full of white fruit and melon flavors, it was a stellar wine.

"How do you compare these first two wines?" the winemaker asked with a sly smile.

Trying not to hurt his feelings, we responded, coyly, "We prefer the second. It was the far superior wine."

"Ha! I thought you'd say as much. They are, in fact, the exact same wines."

Traditional Georgian wines -- including the one we didn't like -- do not use "modern" winemaking techniques (think stainless steel tanks and rows of oak barrels). Instead, after grapes are picked and crushed, everything (seeds and skins included) are placed in clay pots that are buried underground with only a small opening sticking out. The wine ferments in the open. Once fermentation stops, the clay pot is plugged and covered with dirt. It stays there, skins and all (even for white wines), until the winemaker deems it ready to bottle. 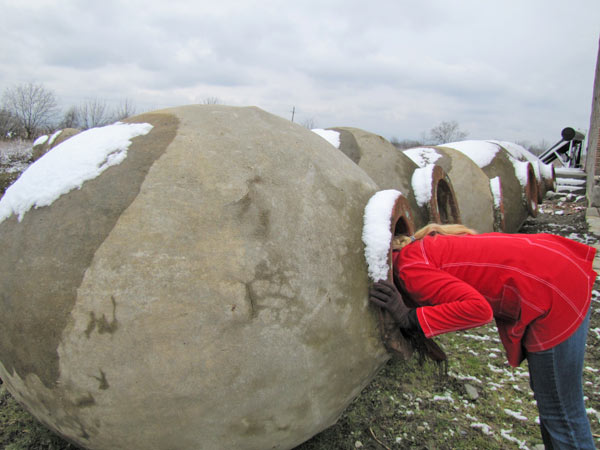 The two wines came from the same exact grapes, grown on the same plot of land, and made by the same winemaker. The only difference was Georgian vs. "modern" winemaking techniques. We learned that, while it seemed "bad" to our palates, the traditional-style wine is prized not only in Georgia, but also all throughout Russian and other formerly Soviet countries.

After many more tastings that week, I, too, grew to respect traditional-style Georgian wine. When made to a high standard, they're rich, warming, light on the tongue, and have a light sourness that you begin to crave once your palate grows accustomed to it. For those beer nuts out there, Georgian wine is to "modern" wine what Belgian Lambic is to lager. I wouldn't want a glass of traditional Georgian wine every night, but it is certainly worth trying if you love the exotic and different. 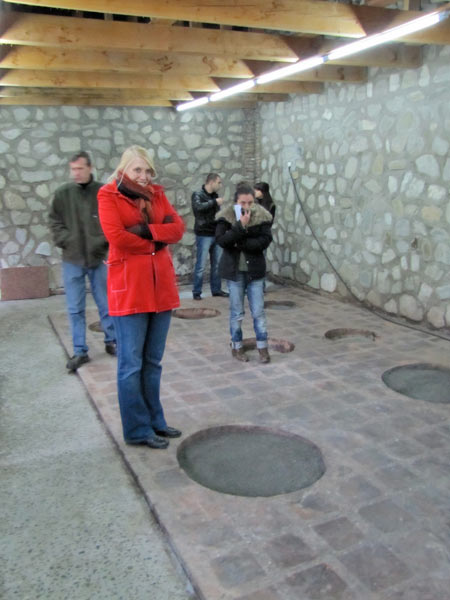 A side story too funny not to tell: The next day, all 125 of us visited a traditional Georgian winery. Anxious to get the best camera angle possible, one of our Chinese colleagues wasn't watching his step...and fell into one of the open clay pots. After seeing he wasn't hurt, everyone laughed so hard the winery walls shook. As one British friend described, "It was absolutely brilliant!"

In all, I'm very excited to see what will come out of Georgia once they start experimenting more with blending "modern" methods and their unique style. With an 8,000-year-old tradition, this country is well-positioned to make some of the finest wine in Europe.