When Lesson.ly was just a four-person company, team candor drove every element of our success. Each member felt comfortable being frank with the others, providing open and honest feedback, even when that feedback risked bruising an ego. What resulted were better decisions, execution, and output. It was contagious. We felt comfortable challenging one another, because we knew one another's pushing came from a place of love, from the mutual desire to build a great company, and we saw it, time and again, produce outcomes that meekness has never known.

Then we started growing. From four, to five, to eight, to ten. As CEO, this growth scared me in all sorts of ways. Would I be able to deliver the vision I had promised to all of these people? Was I in over my head? What if I do something stupid and mess this all up? That sort of thing. For the most part, I knew these were false fears, so I started writing them down, logging them in Writer in an effort to reveal their illegitimacies. By the time I was done, there were only a few worthwhile fears left on the page, and the one that stuck out to me the most was this: I fear the team will lose its candor.

If we lost that, I thought, we were sunk. Our lovely product would suffer. Resentment would build from one decision to the next. People would not be challenged; people would not grow. Our clients would eventually catch on and start running for the hills.

To be clear, my fears had nothing to do with the team we'd built. These were amazing people. But even amazing people, like the rest of us, tend to be wary of conflict, even if it has good intentions.

So, I talked this whole thing out with my counselor. He took my thoughts a step further, "People have a hard enough time showing appreciation to another's face, let alone expressing discontent."

Appreciation is the root of my counselor's doctrine. He thinks if we show it all day long, it will make everything better. I am oversimplifying here, but that's the nuts and bolts of it. In his head, showing appreciation is this ever-available, soul-cleansing activity that nobody seems to take advantage of.

So, like he did at the end of all our phone calls (he counsels me from afar), he encouraged me to practice appreciation every day. Be genuine. Be vocal. Build a habit of sharing your gratitude.

Then Aaron came to me one day and suggested we create "You Art Awesome" cards that the team can share with others when they recognize great work. He's a quieter soul than I am, so I loved that he was trying to find a way to share his appreciation in the capacity that he was comfortable. So we made those cards, and they look like this: 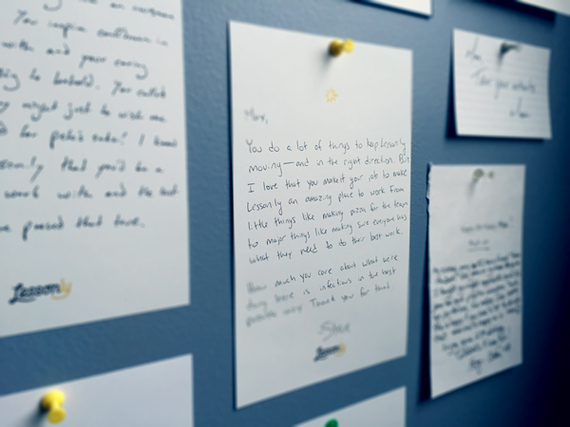 So this whole thing starts to snowball. People are working together, they are becoming very candid in their appreciation, and you can almost feel this buzz around the office, predicated on shared respect.

My counselor is a genius. While I was sitting there all day wracking my brain, trying to figure out a way to make people feel comfortable enough with one another to give open and honest feedback, I should have been showing appreciation. Because, as it happens, appreciation goes farther than making folks feel good. It goes farther than creating a chain reaction of positivity. It also opens the door to other kinds of feedback, the kind that isn't so positive. The kind that pushes you and makes you better if you're in the mindset to accept it. And appreciation, I've found, drives people to that mindset. When you know the person who is critiquing you appreciates you, you don't mind when they try to help, even when that help means a big swallow of pride.

Would you believe it if I told you my counselor knows not the first thing about business? I wouldn't either.

CEO and Founder of Lessonly