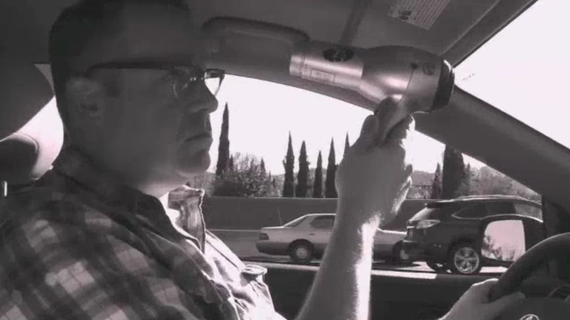 For the first time since 2005, the number of highway deaths rose year over year, according to the Dept. of Transportation. In 2012, there were 33,561 deaths as a result of accidents on U.S. highways. That's a rise of 3.3 percent over the previous year. Also in 2012, the number of injuries as the result of highway accidents was up by 145,000 over the previous year, a 6.7 percent jump.

So, if you wanna be less stupid and more alive when you presumably arrive at your destination after having navigated America's highways, consider the following:

52 percent of those who were killed on the highway were not wearing their seat belt.

Wear your seatbelt, moron! Unless you want to die. Which you don't.

Nearly 9 highway deaths every day and 1,000 injuries are the result of drivers being distracted by (in no particular order):

Anyway, when you're driving your car... Focus. On. Driving. Driving is not an opportunity to show off your multitasking skills. Got it?

If you're a guy, get a sex change. If you're a woman, don't ride in the car with boys.

OK. Yes. Of course, the above are the clearly obvious things people should do in order to avoid becoming a highway fatality. Rest assured, however, I did not take the time to write this post to tell you a bunch of things you already know... but carelessly disregard.

No. I'm going to tell you some stuff you most likely don't know. How you regard it is between you and your maker -- who you will likely meet pretty soon, if you fail to regard what follows.

• In 1975, a University of Chicago economist recognized something incredible. The more safety features a car had, the more recklessly the car was driven by some drivers. Each of us has created for ourselves a degree of risk we are willing to tolerate. However, with the advent of high-tech safety gear like air bags, anti-lock brakes, back-up sensors, cameras, etc drivers are lulled into a false sense of security... and drive more recklessly, with the assumption -- the wrong assumption -- that they are protected.

Wanna be less stupid? Recognize your own reckless impulses to drive a little faster, to be more cavalier, to "trust" the safety gear. Instead, follow the rules of the road.

Wanna be less stupid? Recognize that you should be focused on driving and not on the cool new in-door hibachi that comes standard in your new car.

• Finally, advances in the technology that make your car go are also more prone to failure than long tested less technologically savvy car parts. For example, Toyota had to recall 2.3 million Prius cars because of sudden acceleration when the gas pedal was pressed. You see, in those Priuses, stepping on the gas pedal did not pull a wire that increased or decreased the amount of gas sent to the engine, rather, pressing the gas pedal adjusted a sensor which then adjusted the amount of gas to the engine. The Prius cars that were recalled had electronic mechanisms and sensors that could fail.

Jon Hotchkiss is the creator of the series, This vs. That. Click here to read about his allegations against Discovery Channel & Mythbusters. And, if you'd like to get Be Less Stupid delivered to your inbox, click HERE.