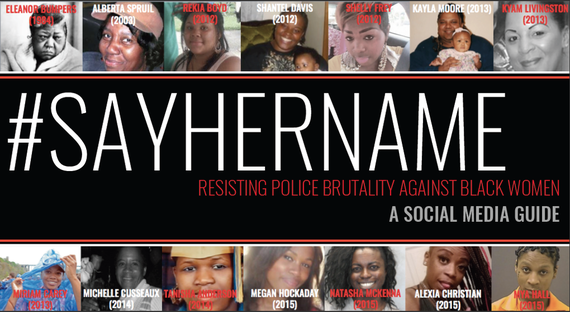 As a black woman motorist alone, Sandra Bland's apprehension and subsequent death underscores the race and gender regime of mobility in the U.S. For many white people, having the freedom to get behind the wheel of a car is a birthright as critical to American national identity as the delusion that the U.S. is the greatest country on the planet. Historically, cars have been associated with masculine freedom, rugged individualism and Manifest Destiny, especially vis-à-vis highway development and the destruction of poor urban communities.

Unlimited access to the open road was a white privilege symbolized by the U.S.' massive investment in suburbia and interstate highways in the 1950s. During the Jim Crow era, African Americans were supposed to yield to white drivers on the road. Failure to do so could mean a traffic ticket, a beating or death. As Stetson Kennedy stresses in the book Jim Crow Guide to the USA, for Southern black drivers, "When on wheels you were to do as on foot." Black drivers are routinely stopped and searched at greater rates than are whites. From the colonists to Kerouac, free, unlimited, boundary-free travel has always been a hallmark of white Americana.

Getting behind the wheel, Bland had three strikes against her. She was black, female and fearless, a combination that is antithetical to all the vaunted white-centered narratives of driving and freedom in the U.S. She was perceived as criminal and unruly, a loud black "bitch" not worthy of the feminine privileges and niceties conferred to respectable white women. Rightly challenging the actions of the officer who stopped her, she was an uppity harridan who clearly did not know her place. Texas D.A. Elton Mathis' comments that Bland was not a "model" person highlight the dominant perception of black women. It is a perception that is always laced with sexual disruption and moral failing. Black women's bodies are always constructed as bodies out of place; uneasily positioned between the binary of masculine and feminine.

This is especially pronounced in public discourse on policing and criminalization in which black women's experiences are still devalued by the mainstream. In its new report, "Say Her Name: Resisting Police Brutality Against Black Women," the African American Policy Forum notes that:

"Even where women and girls are present in the data, narratives framing police profiling and lethal force as exclusively male experiences lead researchers, the media, and advocates to exclude them. For example, although racial profiling data are rarely, if ever, disaggregated by gender and race, when race and gender are considered together, researchers find that 'for both men and women there is an identical pattern of stops by race/ ethnicity.'"

Why do researchers and policy makers overlook this egregious dynamic and solely focus on African American males in public discourse? The marginalization of black women in U.S. civil and human rights policy is a phenomenon that extends back to slavery. As field laborers, mothers, breeders and domestics, black women fulfilled multiple roles that simultaneously reinforced and defied "normative" gender boundaries. Black women were never centered as the primary victims of racist terrorism. As feminist theorist and writer bell hooks argues, antebellum narratives of black brutalization often privileged black men, black patriarchy and black men's stolen right to assume the normal role of patriarch under white supremacy. One of the principal recommendations of the notorious 1965 Moynihan Report was that black men should be given the social capital to become responsible patriarchs. Restoring hetero-normative nuclear black families would redeem, stabilize and correct "matriarchal" black families and chaotic black communities.

In many regards, failure to acknowledge, much less centralize, black women's experiences with state violence is part of Moynihan's racist/sexist/heterosexist legacy. As the AAPF report notes, "both the incidents and consequences of state violence against Black women are often informed by their roles as primary caretakers of people of all ages in their communities. As a result, violence against them has ripple effects throughout families and neighborhoods. Black women are positioned at the center of the domestic sphere and of community life." In New York City, where African Americans are 27% of the population, black women were stopped 53.4% of the time and black men 55.7% of the time, a tiny difference in representation. True to their long history of being victimized by state sanctioned sexual violence, black women are more likely to suffer sexualized violence during police encounters or in police custody. Further, trans, lesbian and gender non-conforming black women are often subject to homophobic and transphobic language which officers use to call their gender identities and sexuality into question (e.g., "threats to 'rape them straight'"). Entrenched homophobia and transphobia among police mean that trans, lesbian and gender non-conforming black women are less likely to be viewed as "proper" victims and/or targets of violent crime.

This racist sexist theme of culpability -- i.e., "the black bitch deserved it" -- is a recurring one in mainstream perceptions of black women's inability to be victims. After the dashcam footage of Bland's arrest was released thousands of online commenters rushed in to vilify her as a "thugette" who provoked the officer's response and, presumably, her own death. In a culture in which black female bodies are racialized and sexualized as out of place, black women are never granted the space of the open road, the freedom to be mobile, self-determined or fearless without permission. Sandra Bland didn't ask for it.