By giving a face to the victims of drone strikes abroad, a powerful new art project is forcing U.S. drone pilots and policy makers to ponder the deadly consequences of one of America's key counterterrorism programs.

Two weeks ago, artists gathered in a rural community of Pakistan's Khyber Pakhtunkhwa province to unveil a gigantic portrait of a local child whose parents and siblings were allegedly killed by missiles fired from a U.S. drone. 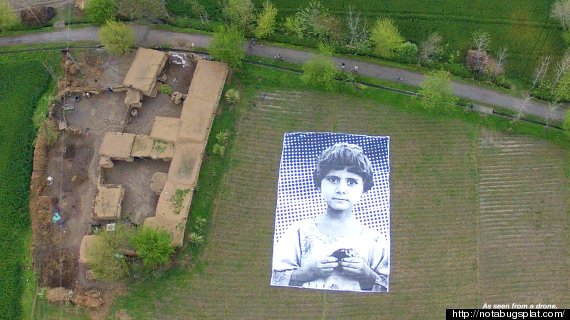 The installation can be seen from the cameras of drones that are known to fly over the region and is called #NotABugSplat, in reference to the slang used by the military for a man killed in a drone strike.

This type of dehumanization of war is exactly what the project is trying to rally against. As the artists explain on their website, it is their hope the project "will create empathy and introspection amongst drone operators, and will create dialogue amongst policy makers."

While the visage of a Pakistani child is front and center to the project, the artists behind it have chosen to remain largely faceless, referring to themselves simply as an artist collective in Pakistan and the U.S., who made use of the French artist JR's Inside Out movement. The exact location of the installation is also unknown, as the media spokesman for the group has previously declined to specify its whereabouts out of concern for the safety of the locals.

#NotABugSplat is one of many projects that attempt to raise awareness of what has been a deadly element of President Barack Obama's light-footprint foreign policy. U.S. drone strikes are believed to have killed over 2,400 people in the past five years. The strikes are an incredibly contentious issue in countries such as Yemen and Pakistan, with protests over the killing of civilians and violation of national sovereignty abound.

UPDATE Tuesday April 8: In a statement to The Huffington Post, French artist JR described the #NotABugSplat installation as a "fantastic use of the Inside Out Project."

"For the past 3 years, with Inside Out, people have been using art and their faces to express a statement - we have sent over 200,000 posters in more than 110 countries," JR said. "In this case the local artists were very courageous and achieved an incredible outcome in order to raise awareness on civilian casualties made by the use of drones in Pakistan. They definitely managed to express a statement in a powerful manner," he added.