Peshawar and Islamabad, Pakistan -- American and Pakistani publics are decrying the CIA's use of armed drones to kill militants ensconced in Pakistan's Federally Administered Tribal Areas (FATA). This may be in some measure due to the pervasive inability to distinguish the military-led drone program in Afghanistan -- which has had significant innocent casualties -- from the CIA-led program in Pakistan -- which is covert and therefore not the subject of voyeuristic spectacles posted on YouTube.com.

David Kicullen, a former counterinsurgency advisor to CENTCOM commander Gen. David Petraeus, has been the most influential foe of drones. In May of 2009, he testified before the U.S. Senate Foreign Relations Committee that the United States should "call off the drones." Later that month, Kilcullen and Andrew M. Exum, who served as an Army Ranger in Iraq and Afghanistan from 2002 to 2004, published a provocative editorial in the New York Times, titled "Death From Above: Outrage from Below."

As I have argued elsewhere, Kilcullen and Exum employed data which Pakistani analysts outright debunk as fabricated to buttress their claim that in the past three years drones assassinated only 14 "terrorist leaders" compared to 700 civilian lives. This is 50 civilians for every militant killed, resulting in a hit rate of 2 percent.

Over the last year, a chorus of U.S.-based analysts has joined Kilcullen in their effort to undermine the most successful tool that the United States and Pakistan have to eliminate dangerous militants that threaten the security of both states on the basis of their purported civilian casualties.

While these maximalist claims are flatly wrong, it has become an article of truth among many Pakistanis and Americans alike that drones are an unaccountable killing machine that both slaughters numerous innocents and tramples Pakistani sovereignty. That Pakistan's own government allows these drones to be based at Pakistani airfields in Shamsi and Jacobabad and provides intelligence for precise targeting does little to attenuate this ill-founded outrage.

Having spent two months in Pakistan where I have made several trips to Peshawar, Swat and even South Waziristan, I continue to collect data which bolster my claims in support of the efficacy of the drone program.

Earlier in June, I met with a senior army officer in the Pakistan army's 11th Corps in Peshawar who categorically rubbished the claims that drones result in civilian casualties and further offered that those persons killed with the "terrorists" are unlikely to be purely innocent. At a minimum they are aware of the militants in most cases and do nothing but enable them by not providing information to the authorities. In extremis, they are active supporters and collaborators. He cited the example of Baitullah Mehsud, the leader of the Pakistani Taliban (Tehreek-e-Taliban-e-Pakistan or TTP) until he was killed in a drone strike in August 2009 along with his second wife while the latter was giving him a leg massage. While she was his wife, she was nonetheless aiding and abetting the mass murderer. Curiously, her own father provided the intelligence that resulted in the death of both his daughter and her ruthless husband likely for remunerative allurements.

This senior officer himself attested to Pakistan's own inability to eliminate key threats and the necessity of the drones to eliminate terrorists in a way that most effectively minimizes the loss of innocent lives. His account accords with that of the police chief of the Northwest Frontier Province (recently renamed Khyber Pakhtoonkhwa) as well with senior officials whom I have met in Pakistan's Foreign Ministry and in various U.S. government agencies.

But don't just believe the word of well-informed military officers overseeing the actual area of operations and other Pakistani officials, listen to the locals of the areas of themselves.

While sitting in a meeting in a Peshawar sitting parlor with several Pakistanis from South Waziristan and other agencies in FATA, one of my hosts articulated what he called a "criminal conspiracy" among the politicians, the intelligence agencies, the media and even the military to sustain a public narrative undermining the drone program while benefiting from the same.

These FATA residents are strong proponents of the drones. They report that the drones are so precise that the local non-militants do not fear them when they hear the drones above as they are confident that they will hit their target. Locals attribute this precision in part to the placement of "targeting chips" which direct the ordinance to the exact location of the militants in their redoubts. The accurate placement of these chips requires local cooperation to provide the whereabouts of these militants. This has driven an important wedge between the locals and militants with the former shunning the latter.

Another interlocutor explained that when children hear the buzz of the drones, they go their roofs to watch the spectacle of precision rather than cowering in fear of random "death from above."

These observers are not alone. Professor Ijaz Khattak, in the Department of International Relations at University of Peshawar explained to a popular television host Skaukat Khattak, that "The drone attacks have proved effective and have targeted the terrorists and there had been little collateral damage in the US drone attacks."

While many locals seem to appreciate the value of the armed drones and are ostensibly aware of who the militants are that are killed, the outrage of the Pakistani public intensifies as one moves farther away from the place where the missiles land. Within the main provinces of Pakistan, there is staunch popular outrage to the drones.

This antipathy towards the program is due in large measure to the collaboration of Pakistan's media to sustain tenacious criticism of the program by spreading suspect civilian casualty reports planted by the militants themselves or various "agencies." It makes no difference that none of these reports can be independently verified because FATA's legal status precludes independent media from traveling there. Nor does it matter that such high figures of civilian loss of life would certainly lead to funerals in large numbers which have not been reported.

Moreover, because the program is technically covert, the U.S. government makes no effort to combat this onslaught of misinformation. The U.S. embassy in Islamabad is in the unenviable position of neither "confirming nor disconfirming" the same drone attacks which President Obama has in numerous fora hailed and even joked about and which White House lawyers defend as legal. 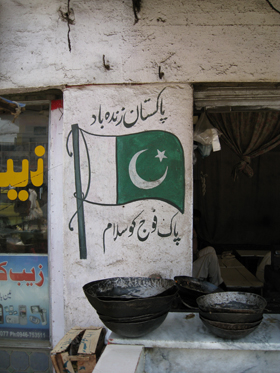 The Changed Debate...At Least in Pakistan

While American opponents of the policy cling to empirically specious claims about the drones and their purported "civilian casualties," within Pakistan itself the debate is far more sophisticated. Since April 2009, many changes have occurred across the Pakistani social landscape albeit with variation across the expanse of its territory.

First, the Pakistani Taliban (Tehreek-e-Taliban-e-Pakistan, TTP) made an enormous strategic blunder. Throughout the early months of 2009, the provincial officials of Khyber Pakhtoonkhwa as well as the central government were negotiating a so-called peace deal with the militants associated with the TTP operating in the settled area of Swat. By most accounts, Pakistanis as well as Swatis themselves embraced this as a viable option to diminish the violence and restore peace to this territory that had been riven by TTP violence. As the ink on the deal was drying, the TTP breached the agreement in April 2009 and overran the town of Buner, sitting to the immediate west of the Indus River.

This had two effects. First, it persuaded those in Swat and elsewhere, who had previously supported the Taliban's self-proclaimed campaign to restore good governance and provide access to justice, that the Taliban were not interested in peaceful coexistence and were in fact committed to violence and expansion of power.

Second, the onslaught against Buner had a powerful impact upon Pakistani opinion about the intentions of the TTP militant. Pakistanis have long viewed the Indus as an important barrier dividing the Pakistani heartland, comprised primarily of the Punjab and which lies to the east of the Indus, and the "uncontrollable" land of the Pashtuns lying to the east of the Indus. For Pakistanis the unruliness of this area increases as you move from the so-called "settled" Pashtun areas of Khyber-Pakhtoonkhwa towards the west where the "unsettled" tribal belt abuts Afghanistan. When the TTP militants came to the border of the Indus, many Pakistanis who were confident that the TTP only wanted the "Pashtun areas," came to believed the TTP militants want of all of Pakistan.

These apprehensions were confirmed and even intensified when Sufi Mohammad -- a local leader of the TTP in Swat -- convened a congregation in the Swat city of Mingora and denounced the Pakistani constitution, declaring that Islam cannot accommodate democracy and that western democracy in particular was a system of infidels that has divided Pakistani society.

Robust military operations began thereafter, this time with the significant degree of support of the public and diminished opposition to the same. Some four million persons were displaced from Swat once the operation began. (The army encouraged this displacement to permit it freedom of action against the militants; although the exodus was ill-planned with only a few days notice.)

During my recent two trips to Swat, the Swatis I met from the Mingora area are generally pleased with the army's operation and are -- for now -- glad the army is in place. These Swatis see the army as the one organization that gets things done in contrast to the civil administration which has yet to re-establish itself after the militants drove out civil authorities.

Amidst allegations that the army was indiscriminate in its use of force, some Pakistanis began arguing that Pakistan should have its own drones to allow Pakistani forces to have the same accuracy as US forces. Increasingly Pakistani officials are requesting that the United States provide drones or at least let them have a role in pulling the trigger. Advocates of Pakistani drones or increased command and control over U.S. drones note that armed drones have neither displaced millions of Pakistanis nor resulted in the destruction of homes on a large scale.

Killing Whose Enemies? Killing Our Enemies

The August 2009 killing of Baitullah Mehsud catalyzed another shift in the Pakistani discourse. This was the first drone strike that killed a Pakistani militant who was exclusively an enemy of Pakistan. As Baitullah Mehsud had no operational import for the U.S. mission in Afghanistan, Pakistan understood that the United States was finally employing its use of force to contend with Pakistan's own internal foes.

This shift in the drone debate is an important shift that few American interlocutors appreciate as they sustain a baseless narrative that is deaf to the realities across Pakistan. Drones went from being universally dismissed among Pakistanis as a horrific menace to an instrument of significantly and comparatively humane lethality relative to other options.

American analysts would be better served by appreciating the developing nuances in the drone debate in Pakistan before seeking to undermine the best program that the United States and Pakistan have in their mutual war on terror. Both American and Pakistani governments can help foster a more constructive debate by owning the program and disclosing Pakistan's ever-increasing cooperation to shape the debate by providing empirical data about the drones' victims and their operational significance. Few Pakistanis in the FATA, Khyber Pakhtoonkhwa or elsewhere in Pakistan would disagree that the world is a better place without Baitullah Mehsud in it.