Social media has long been a tool for web-savvy artists, but there's something about James Bridle's ability to turn an Instagram snapshot into a powerful political statement that makes his artwork truly unique.

His cleverly named project, Dronestagram, has been making the internet rounds since late 2012, using familiar blogging platforms like Instagram and Tumblr to showcase a series of drone strike locations from above. Taken from Google Earth images, the photographs reveal the familiar geography of satellite mapping technology but are meant to mimic the sight a drone might have prior to and after launching an attack. (Scroll down for rest of article.)

"The photos are selected to be as geographically accurate as possible," the British writer and artist explained in an email exchange with The Huffington Post. "Although... this isn't nearly as accurate as anyone would wish. I tend to pick a filter on the fly to make the image as 'legible' as possible, as the quality of the satellite photos varies greatly."

Presented in varying shades of green and brown, the photos become pieces of internet art when Bridle uniformly displays them on his social accounts. "Any aesthetic results [in the images] are a side-effect," Bridle claims. "Although they obviously comment upon the situation of the images on a platform such as Instagram as well."

Ultimately the works are an effort to connect civilians at home (or, more precisely, behind their computer screens) to the scene of distant, unmanned attacks. "The main intention is to simply raise awareness of the events as they are occurring. Beyond this, there is a hope that people may think more deeply about the connections between networked communications and forms of warfare, and the political dimensions thereof."

Scroll through the images above for a taste of Bridle's "Dronestagram" project and let us know your thoughts in the comments. For more information on his work, check out his other drone-related projects, "Drone Shadows" and "The New Aesthetic," here. 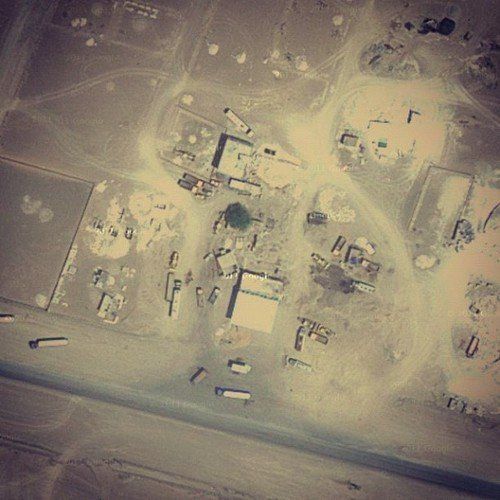 1 / 15
October 21, 2012: An evening strike on a car killed ‘at least four’ alleged al Qaeda members in Maarib province, several miles outside Maarib city, sources reported. Local al Qaeda commander Sanad Ouraidan al-Aqili was reported to be among the dead. ‘Aqili’s three companions, whose bodies were blown to pieces, have not been identified yet,’ a local policeman told AFP. ‘A warplane targeted a car in the Wadi Abida area that was suspicious [suspected] of carrying Al-Qaeda militants,’ a local source said, although other tribal sources and Yemeni officials claimed the missiles were fired by a US drone. (Maarib)
<a href="http://dronestagram.tumblr.com/" target="_blank">James Bridle</a>