On the heels of banning Dakota Fanning's sultry ad for Marc Jacobs' "Oh, Lola!" perfume, UK's Advertising Standards Authority has put the kibosh on another advert, this one for featuring a too-skinny model.

As online mag Campaign reports, the ASA cited ads for Drop Dead, a British clothing line, as "socially irresponsible" for featuring a visibly underweight model in a bikini.

In a statement, the ASA said that it considered the young model too skinny:

"In the bikini images her hip, rib and collar bones were highly visible. We also noted that in the bikini and denim shorts images, hollows in her thighs were noticeable and she had prominent thigh bones. We considered that in combination with the stretched out pose and heavy eye makeup, the model looked underweight in the pictures."

Considering that the ads are targeted at young people, the image of a seemingly anorexic model sends the wrong message about body image, says the ASA, and are therefore banned from use.

Drop Dead is just one more fashion company to get caught in ASA's crosshairs, as the British watchdog agency has gotten busy regulating the often provocative images used by fashion and beauty brands.

The ASA has taken issue with sexiness, such as the Dakota Fanning ad as well as the presence of racy adverts near elementary schools; with suggested drugs use, such as YSL's Belle D'Opium perfume spot; and with the blatant deception of consumers, such as overly airbrushed L'Oreal ads and a Louis Vuitton advert that implied its products are all made by hand.

Now body image is also coming under fire. Take a look at the supposedly anorexic model from Drop Dead's ads below. Do you think the ad deserved to be banned? 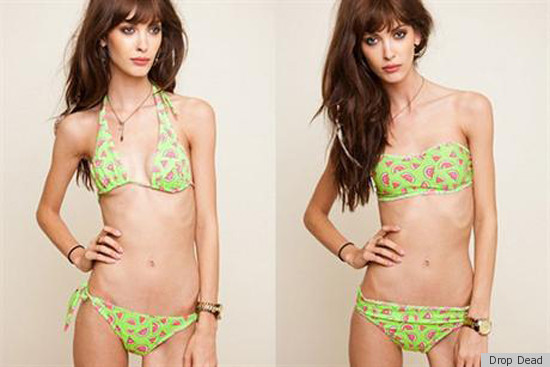