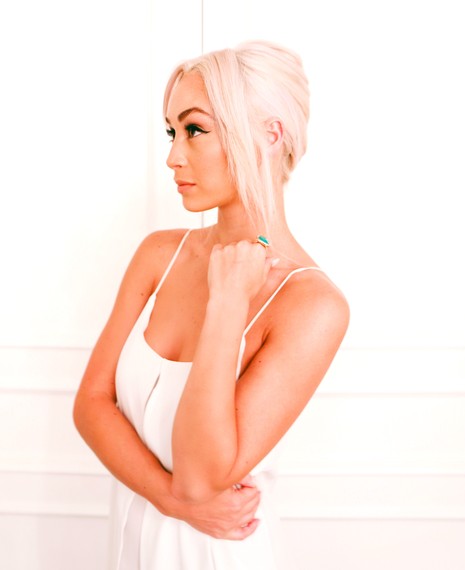 Opinionated. Emotional. Neurotic. Strong. Intense. Just a few of the words that precede "woman." Yes, in today's world there seems to be no shortage of adjectives that define the feminine pronoun. In a traditionally male dominated field of business, finance, tech and entrepreneurial endeavors, we women find ourselves labeled with adjectives that rarely find themselves in front of our male counterparts.

Sexism in the work place has taken a shift, but it is not nonexistent. I'm not talking about the stereotypical sexism that existed in the 50s and 60s. I'm talking about a more covert, illusive and hard to recognize sexism that lives in the discussion about women and to women. It's how we are talked about. How we are spoken to. It is not as easy to spot, but when you are the recipient of it, it penetrates with reverberation. Of course, we have progressed as a culture, but that should be expected. Sure, we find more and more female CEOs and CFOs like Marissa Mayer and Carol Meyrowetiz, a record amount of female political representatives, including Kristen Gillibrand and Elizabeth Warren, a plethora of women general counsels, like Karen Roberts and Katherine Adams and an all around more full representation of our sex in high powered business roles. However, out of 340 CEOs at Fortune 500 companies, only 17 are women, the US ranks 98th for the percentage of women in their national legislature, and only 21% of general counsels are female and there still seems to be a remaining trend of categorically isolating our characteristics in ways men just are not. With equal pay being a hot topic socially, I started to wonder, should we fight for the right for equal adjectives, or just none at all?

Starting my own small start-up business has opened me up to a world that has been far removed from my consciousness as an actress. Sure there are sexism, ageism and racism in the entertainment world, but that generally sits in the realm of aesthetics. But, in business it has little to nothing to do with the way you look, or even your IQ. No, as a woman your business acumen is constantly called into question by way of your attitude, emotions and sensibility.

I'm not some hard-core feminist by any means. In fact, I err on the side of traditionalism in my own life. Living with my boyfriend of over nine years, I find myself often taking the quintessentially female role in my personal life. However, when engaging in my professional setting the art of being a woman, really is that -- an art. A perfectly balanced tiptoe to unobjectify my behavior. You can't be too soft, but you can't be too tough. There seems to be an inherent checklist for the female behavior. I am a multifaceted person, full of duality, why can't I be accepted as such? Fitting into this perfect paradigm that has been created for me is limiting and exhausting. I want to be a fully conceived being with a myriad of qualities and traits. That's the beauty of being a woman.

Never having graduated from college, without a degree and with little to no experience in business you would think this would create conjecture about my ability to create a thriving business from my peers. Not so much. What seems to be my detriment? My vagina. Yes, I said it. My vagina seems to create a defacto issue for how the business world sees me. Having an opinion has made me "emotional." My assertiveness is "bitchy." My no nonsense policies are defined as "strong." My straight forwardness is seen as "abrasive." And the list goes on and on. It seems as though, the way I'm represented and communicated about as a woman has no shortage of adjectives.

Why is this? I started looking back at the lineage of women in the work force. In the 50s the woman's main role was the caretaker and homemaker. An invaluable job, no doubt. However, we soon decided that we were equipped for roles outside of the home. Did the male dominated industries not like this? I soon started to hear about the plight of the working mom. Could she really do both? Would one job suffer? If she excelled in business, would she be lackluster as a mom? And vice versa. Where did that stigma start? Was this in the mind of a woman, or simply the implications from others that allowed us to start questioning ourselves? I started thinking about my own mom, a high-powered attorney of 20 something years. What was the world like through her eyes? And then my mom's mom, who at 50 went to college and finally got her degree? What about my dad's mom who never had an education, let alone a job? We seemed to have evolved, but why does it seem as though we still find ourselves in this precarious battle of balancing our sexuality and our work?

I am not vilifying men at all. There are plenty of men who rally with us women and propel us into an unencumbered world where we can do it all. My father for one has never been intimidated or unnerved by the success of my mother or even by his colleagues. A very forward thinking man, in his career the promotion or job went to the most deserving, regardless of their sex. My boyfriend is another. He genuinely supports and pushes me to strive for optimal performance and success, seeing no deficit in the fact that I am female. I am not talking about you guys. No, not at all. I am talking about the guy who rolls his eyes at this article. The one who so ignorantly rebuffs the plight of a woman he can't even discuss the idea. The guy who can't stand the perpetuation of this conversation, because he sees no value in it, or worse thinks this part of the problem, not the solution. Him, I'm talking about him. And yes sir, you know who you are. You describe Hillary Clinton as "too strong of a woman." You cringe at the idea of working with one of us, because "women are just such emotional creatures." And secretly, or sometimes not so secretly, you say to yourself, "they just aren't as capable as men, because women are the weaker sex." I've heard it all, but why I wonder do you feel the need to objectify us with adjectives that feed into a conversation that does not unify us? Wouldn't we be stronger if we came to value what each other have to offer? There is a rainbow of adjectives that I could use to define you sir, but I chose not to, because I have bigger fish to fry.

So, what is a woman to do? I don't have all the answers and I don't purport to. I simply wanted to call upon an issue I see, to encourage a conversation to help illicit change. All I can do is speak on experience and identify with those around me who have had similar ones. This is a group effort. I want men to see us as their allies and assets in business. We can be authoritative and nurturing, vulnerable, yet strong; kind, but firm and the list goes on and on. These traits should be seen as pros, not cons. They should be utilized, not mocked. And they certainly should qualify our ability. And until there is true equality, what will I do? I will continue to work harder if I have to, to gain your respect. I will let me work speak for itself. I am not asking for handouts or allowances, I will pull my own weight. But, I don't need a description to my work ethic. I will let my performance silence my critics. And for those of you who never come around, who always think I am less then you, or have a word that defines who I am, I will let you think what you will and while you sit in ignorance and I will teach you by my actions how foolish you are.