Climate change will mean more extremes in wet and dry cycles in the American Southwest, including longer and more intense droughts than the region has experienced in the past 50 years. Dr. Michael Bogan of the University of Arizona studies the impact of climate change on waterways. I interviewed him to find out what these changes mean for nature and humanity's future in the region.

Answer : Regional climate change models uniformly predict more intense and long-lasting droughts. These changes will certainly lead to decreased water supplies. Smaller communities in California are already feeling these impacts, with local reservoirs going dry, and farms and towns rushing to dig deeper wells to tap falling groundwater levels. Larger cities like Los Angeles can import water from distant rivers, like the Colorado River, but even these remote supplies are dwindling. In short, we are all going to have to learn to adapt a drying climate in the coming decades. 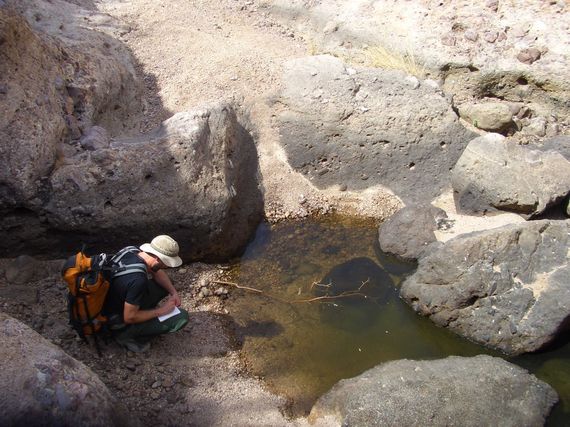 Question 2: From your research, what changes have you seen in Southwestern streams?

Answer : Over the last 15 years of drought in the Southwest, we've been seeing streams dry up for the first time in the historical record. Our research goals are to understand what effects these extreme drying events are having on the fish, frogs, and insects that live in these streams. One of the things we're seeing is big changes in the types of species we find in streams before and after these unprecedented drying events.

For example, the giant water bug, a 2-inch long voracious invertebrate predator capable of eating frogs and fish, is eliminated from drought-stricken streams. Their populations fail to recover even when droughts ease and rain brings water back to the streams. The loss of these important predators has cascading effects on the rest of the ecosystem, including influencing the amount of algae that grows in the stream and the abundances of other aquatic animal species. These changes are also likely to affect the birds, lizards, and other animals that live along and depend on these streams for food and water. In fact, some of the studies I'm planning right now focus on the impacts of stream drying on terrestrial species that live near streams. (See also: onlinelibrary.wiley.com/doi/10.1111/fwb.12522/full) 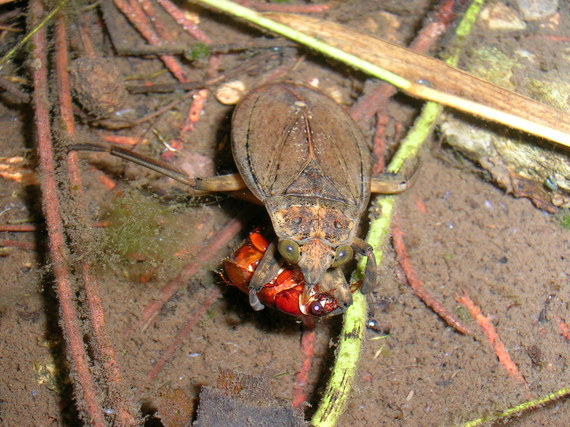 Question 3: Are we actually seeing species go extinct due to drought?

Answer : Drought in the Southwest is causing both distinct populations of animals to go extinct, as we have seen with the giant water bug, and is causing entire species to go extinct as well. For example, many species of springsnails (family Hydrobiidae) are only found in a single spring or set of springs in the Southwest (bioscience.oxfordjournals.org/content/64/8/693). These endemic springsnail species are really vulnerable to extinction if their only home dries up. In fact, a species of springsnail in Mexico was recently discovered to be a new species, but it was described from museum specimens after its only known spring habitat had dried up (www.mapress.com/zootaxa/2011/f/zt03001p032.pdf). This suggests that species are going extinct all over the desert as springs dry up during extreme droughts, and we don't even know how much biodiversity we're losing.

Question 4: How can we balance the competing water needs of humanity and nature?

Answer : Balancing the water needs of society and nature is one of the most pressing challenges in the Southwest today. First, we need more information about exactly how much water each aquatic species needs. Some species may be more drought-adapted and thus be robust to low water levels or drying. In contrast, other species, like salmon, will need much more water. With that information, we can figure out the minimum water needs for healthy streams across the Southwest.

Next comes the hard part. We need to have frank conversations about where and how we use water. For example, it may be that some types of crops use too much water for desert cultivation, and growers may need to change crop types to conserve water. At the same time, our cities and towns need to increase water conservation efforts, especially during critical times of the year, like summer, when stream ecosystems might be stressed. I'm an optimist, though, and believe we can balance these competing water needs. We just need to have solid ecological data about minimum flow needs and continue to be the innovative and adaptive species that humans have always proved to be.

Question 5: What do the tiny creatures that live in streams have to teach us about surviving drought?

Answer : Though they may be small, the tiny creatures in Southwestern streams can teach us a lot about how to live through a drought. For example, there are several species of winter stoneflies (family Capniidae) that can shrivel up and enter a dormant state when their home stream dries up. They remain in that state until the next winter's rains arrive, at which point they spring back to life. Then, they quickly do the things that all life does (eat, sleep, and reproduce) before the stream dries up again (onlinelibrary.wiley.com/doi/10.1111/fwb.12105/full).

Obviously, humans can't quite manage this same trick, but we can learn from the seasonal lifestyle of these stoneflies. We can be cognizant of the limitations of living in a desert, use water wisely in the seasons it's most abundant, and change our behavior to conserve water during the dry times. Past societies, like those of the Anasazi and Mayan cultures, were likely undone by a combination of drought and inflexible human behavior (see NYT article). If we take a cue from the tiny creatures in our desert streams, however, I believe our modern society will thrive through the droughts of the 21st century.

Dr. Michael T. Bogan is assistant professor of aquatic ecology at the
School of Natural Resources and the Environment at the University of Arizona and a David H. Smith Conservation Research Fellow.