Barbie's slight but potent form carries five decades of heavy cultural associations on its diminutive shoulders. In her riveting new body of work Drown the Dolls, Daena Title mines that iconic ground for fresh and provocative meaning. Barbie's creator Ruth Handler once commented that she "designed Barbie with a blank face, so that the child could project her own dreams" onto the doll -- and Title's Barbies are captivating vehicles for the projection of her trenchant personal vision. 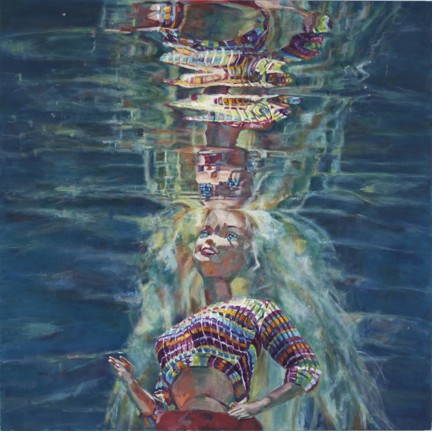 The paintings in this remarkable series portray the doll in different guises while submerged in the cool blue water of a swimming pool; her various roles include vacant sex symbol, adrift sea goddess, and drowning bride. In Water Doll, a golden-maned beauty has an almost spiritual glow as the brilliant sun spotlights her from above. Everything about her and her watery world has a magical, sensuous quality, from the luscious blue-green palette to the rich application of paint. Arms stiffly akimbo, this Barbie is a modern Ophelia, with flowing hair, pneumatic chest and impossibly blue eyes. The rippling water above her acts as a grotesque mirror. In its fractured, upside-down reality, Barbie's smile is an open scream, and her vacant eyes are wide with fear as her troubled id comes to the surface. Society's twisted notions of gender and beauty may idealize this hyper-sexualized doll-woman, but her distorted reflection undermines any illusions of glossy seduction. 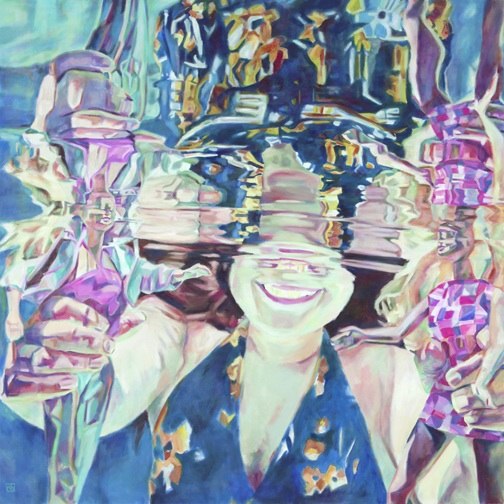 Occasionally a young girl joins Barbie in the pool, adding a layer of tantalizing dialogue to the scene. In Pool Witch, she floats toward the viewer, a flesh-and-blood antidote to plastic perfection, clutching Barbies in each hand like proud trophies. The girl's and dolls' forms dissolve into a jumbled mosaic on the water's surface above. Their broken, interconnected reflections become a projection of the girl's psyche -- suggesting her open and still unformed identity, and emotional attachment to her Barbies. Below the water's surface, however, the girl's vibrant pubescence is at odds with the dolls' sterile sexuality. Although she's on the cusp of Barbie's adult world, the smiling young swimmer exudes a carefree innocence. This moment is poignant in its evanescence but also exhilarating -- there's a contagious optimism here, from the girl's palpable joy to the vivid colors and dynamic flux of form and reflection. In the end, Pool Witch is an exuberant affirmation of feminine power and possibility.

Title lives and works in Los Angeles, and her Barbie paintings are as inviting and refreshing as the suburban pools they're set in. The show runs January 8 through February 16 at L.A.'s Koplin Del Rio Gallery, and offers equal measures of visual delight and intellectual reward.