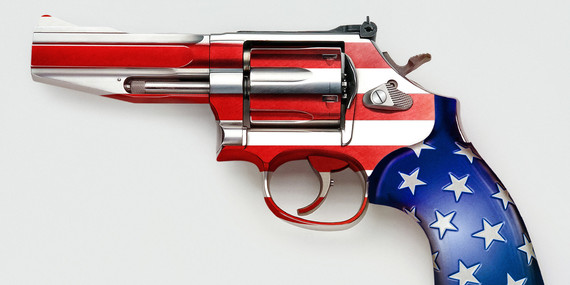 Blood is running through American streets, drowning our people and our freedom to move without fear through our homes and neighborhoods.

The mass shooting in Kalamazoo, Michigan that killed six and seriously wounded two others is the 42nd in 2016 according to the Washington Post on February 21, 2016.

Yes, that's right. It's only February.

Americans kill each other with guns well beyond these mass murders. The Gun Violence Archive lists 1,740 gun deaths and 3,396 injuries in 2016.

How much more blood needs to be shed for Americans to atone for the sin of our completely out-of-control gun culture? Yes, atone. Atonement means make right for something that is wrong.

I'll tell you why we as a country need to atone, to make right a great wrong. We have failed to act to stem the tide of guns flowing through every American town and city, and with it, the spilling of blood. We are all, without exception, at least guilty of a callous disregard for the value of human life, if not actual greed in promoting the sale of guns, the distribution of guns and the sabotage of sensible gun legislation.

We allow our children to go to school, and buy bullet-proof backpacks and clothing for them. But we don't go get the bullets.

We cherish the sanctity of marriage, but women are five times more likely to be killed in a domestic violence incident when there is a gun in the home. Instead, women can buy pink concealed carry underwear.

Does that protect them from gun violence? No. Does it put their children at risk? Yes.

Children find guns and kill or injure themselves, other children and adults at alarming rates. In 2015 toddlers shot themselves or others on a weekly basis. Toddlers.

Do you see a pattern here?

The Kalamazoo shootings are being called random. After 42 mass shootings, "random" is not exactly accurate. There is a common denominator, and that is guns.

Neighbors of the accused Kalamazoo shooter told CNN that he is married with two children, and that they seemed to be a "typical American family."

The husband "did tell CNN, however, 'I know he liked guns.'

What do those two statements tell you about our society today? The typical American family likes guns.

We are standing ankle deep in a river of blood and pretending its just one isolated, random incident after another.

I beg you. Become active in your own state to promote sensible gun legislation. I support Everytown for Gun Safety. There are many other fine organizations. But please, become active.

Stem the tide of blood.