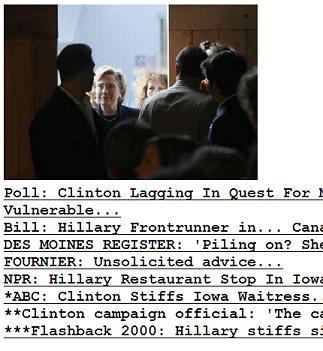 NPR ran a story this morning that describes what happened to Iowa resident and waitress Anita Esterday when her "chance encounter" with presidential hopeful Hillary Clinton at the Maid-Rite diner where she worked became an official part of Clinton's campaign narrative. Plenty of interesting grist for commentary, not the least of which is how Esterday suspects this encounter led to her hours at a second job getting cut because her supervisor there "isn't a big Hillary Clinton fan."

But that isn't the part of the story that Matt Drudge seized upon. In the middle of the piece, Esterday said, "I mean, nobody got left a tip that day," and despite the fact that the very next paragraph reads, in part, "Still, Esterday said Clinton might have left her something: 'Maybe they don't carry money. I don't know,'" that became the basis by which Drudge starting leading the media by the short hairs. Drudge added a "Nobody Got Left a Tip" link to a burgeoning list of Clinton-critical stories at 9:40 this morning. ABC News and MSNBC followed almost immediately.

While avoiding explicit mention of the tipping incident, even the Obama campaign linked to the NPR story at 1:32pm, calling it "incredible audio" and "a must listen."

As it turns out, the feeding frenzy gathered around a non-existent morsel. From FOX:

Hillary Clinton's campaign may not know in which staffer's hands landed the tab at an Iowa restaurant on Oct. 9, but all sides agree the Democratic presidential frontrunner is no slouch when it comes to leaving a tip.

National Public Radio was forced to correct a story it issued Thursday that had suggested Clinton left waitress Anita Esterday high and dry after Esterday served the candidate and her entourage when they stopped in to the Maid-Rite diner near Boone, Iowa.

Turns out, however, that the campaign paid $157 for the meals and left a $100 tip. Campaign spokesman Phil Singer said he doesn't know what happened to the money, but Maid-Rite manager Brad Crawford confirmed to FOX News that the bill and tip were paid. He wouldn't say the check's amount.

Corrections to the story now run at NPR, ABC News, and MSNBC. All of them carry statements both from the Clinton campaign and the manager of the restaurant. Drudge has a correction of sorts: a linkless sentence carrying the campaign's statement on the matter. In lieu of the widely available exculpatory statement from the Maid-Rite manager, Drudge has recycled a story on a similar incident that transpired eight years ago, reported by the no-doubt entirely non-critical Washington Times.