Two pharmaceutical companies are asking a federal judge to stop Arkansas from using their drugs in the planned execution of seven men in 11 days this month.

The European-owned Fresenius Kabi USA and West-Ward Pharmaceuticals Corp. filed a friend of the court brief in support of a lawsuit by inmates because they’re opposed to their drugs being used in capital punishment.

“The use of the medicines in lethal injections runs counter to the manufacturers’ mission to save and enhance patients’ lives, and carries with it not only a public-health risk, but also reputational, fiscal and legal risks,” the companies said in their brief.

The drugs’ use in executions is a breach of the companies’ “supply chain” controls, argues the brief, which was filed Thursday. The manufacturers “sell only to wholesalers and distributers who agree to resell only to acute-care hospitals, clinics, and healthcare facilities,” and the drugs were never intended to be used in executions, it states.

“The only conclusion is that these medicines were acquired from an unauthorized seller in violation of important contractual terms that the manufacturers relied on,” the companies added.

In addition, using drugs for capital punishment “creates a public-health risk because it could result in the denial of medicines from patients who need them most,” the brief stated.

Arkansas hasn’t executed anyone in more than a decade. Now officials plan to begin with a double execution on Monday and finish executions on April 27. (An eighth man, Jason McGehee, won a reprieve.) One defense attorney blasted the schedule as an “assembly line” execution, Reuters reported.

The state is reportedly rushing to kill the men before its supply of the controversial sedative midazolam used in executions runs out at the end of April. The drug has been implicated in botched executions in Ohio, Arizona and Oklahoma.

Arkansas officials won’t say where they obtained the drugs they intend to use, but Fresenius Kabi is suspected of manufacturing the potassium chloride — which stops the heart — planned for the executions. And The Associated Press reports that West-Ward is the likely source of the midazolam the state plans to use. 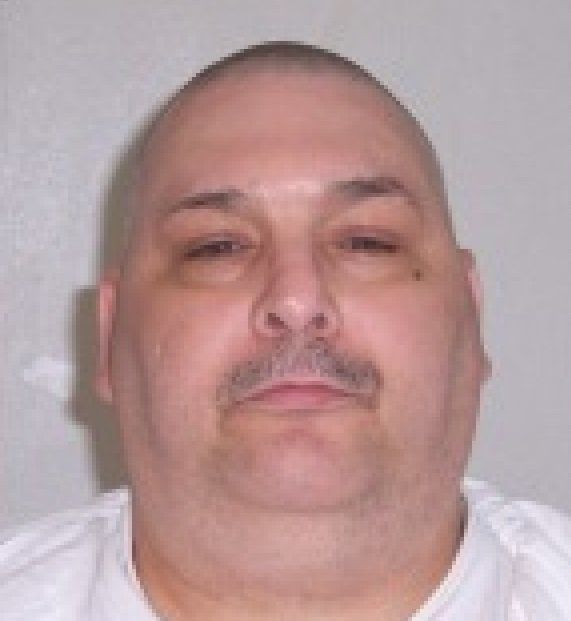 1 / 7
Jack Jones Jr. | Age 52 | 22 Years On Death Row
Jack Harold Jones Jr. was convicted and sentenced to death for the rape and murder of a bookkeeper and the near-fatal beating of her young daughter.<br><br>According to <a href="http://caselaw.findlaw.com/ar-supreme-court/1215619.html" target="_blank">court documents</a>, authorities were called to a Bald Knob accounting business on April 1, 1993, after the bodies of 34-year-old bookkeeper Mary Phillips and her 11-year-old daughter were found covered in blood.<br><br>Phillips was found bound and naked from the waist down. An electrical cord had been wrapped around her neck. According to autopsy results, she died from strangulation and blunt force trauma to the head. Rectal swabs indicated that she had been anally raped prior to death.&nbsp;<br><br>A crime scene photographer was taking pictures of the youngest victim, thought to be dead, when she suddenly awoke. Doctors later determined the child had been beaten so badly that depressed fragments of bone had been driven into her brain.<br><br>When authorities questioned Phillips' daughter, the child said a black-haired man with a teardrop tattoo had committed the crime. The girl said that after robbing the cash register, he tied her to a chair and took her mother to an adjoining room. The girl said she was crying when he came back alone, and she asked him not to hurt her mother, to which he replied, "I'm not. I'm going to hurt you."<br><br>The girl said the man choked her until she fell consciousness. It is believed that she was then struck in the head at least eight times with the barrel of a BB gun.<br><br>Based on the child's description of the suspect, authorities brought Jones in for questioning. Authorities said he confessed to committing the crime and said he did so to get revenge on the police, who&nbsp;he claimed did nothing to arrest the person responsible for raping his wife.<br><br>Jones was ultimately convicted of capital murder, rape and criminal attempt to commit murder.<br><br>In 2003, DNA linked Jones to the 1991 strangulation murder of 32-year-old Lorraine Anne Barrett. Jones pleaded guilty in 2005 and was sentenced to life without parole.<br><br>Jones appellate attorneys have since argued that evidence of mental health issues &ndash; including his committal to a psychiatric facility in the months leading up to Phillips' murder &ndash; should have been presented at trial.&nbsp;<br><br>Earlier this month, Jones failed to appear in court for a clemency hearing. During the hearing, his attorney, Jeff Rosenzweig, <a href="http://www.arkansasmatters.com/news/local-news/arkansas-death-row-inmate-i-havent-wanted-clemency-ever/688859889" target="_blank">read a letter</a> addressed to Phillips' daughter. <br><br>"Your wish is and always has been that I die," he wrote. "And I could never, ever deny you this."<br><br>Jones was ultimately <a href="http://www.arktimes.com/ArkansasBlog/archives/2017/04/10/parole-board-denies-clemency-for-jack-jones" target="_blank">denied clemency</a>.<br><br>Jones' execution is scheduled for April 24.
Arkansas Department of Corrections