If you've been reading this blog, you have a pretty good sense that the deck is often stacked against consumers when it comes to medical pricing. Also, pharmaceutical companies can be some of the worst offenders, though the existence of generic drugs can keep them at bay. But even then, there are bizarre and nasty ways you can get caught if you're not careful.

I often check the prices of the medications I prescribe because I've found they can change suddenly and without warning. About three weeks ago (on November 21st), I looked up the price of generic Irbesartan (commonly prescribed for high blood pressure) at Costco.com and found this: 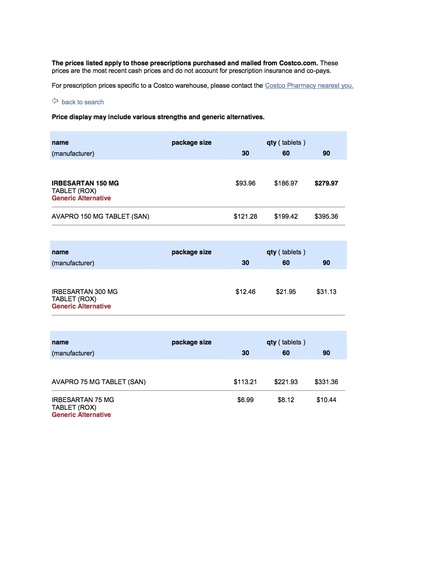 As you can see, the 150 mg dose of irbesartan had skyrocketed. When I looked it up in early October it was only about 15 cents a pill. Still, the 75 mg and 300 mg doses were very cheap. All three doses are made by the same pharmaceutical company, Roxane Laboratories, so what's going on? Why was the price of 150 mg Irbesartan almost 30 times the price of the 75 mg dose (for 90 pills) and nearly 10 times the price of the 300 mg dose. Costco verified that it wasn't a mistake -- they were just passing on the most recent price from the manufacturer.

Now this seems crazy even for a pharmaceutical company. Imagine walking into a grocery store to buy a couple half gallons of milk and finding that the half gallon is $20. But the quart is still $1.25 and the gallon is $3.50! Sure, the half-gallon fits in the fridge better, but you'd switch to the quarts or the gallon in a heartbeat. So, why would a pharmaceutical company think they could price the middle dose so much higher than the other doses, when you could just take two 75's or cut the 300's in half?

Well, we need to understand the surreal world in which prescription drugs are bought and sold in the U.S., and how they're different from just about anything else you might buy. When a doctor writes you a prescription for, say irbesartan 150 mg, the pharmacist is obligated to sell you irbesartan in 150 mg pills and only that. He can often substitute generic medications for brand named ones, but that's the only change a pharmacist can make without first getting permission from the prescribing doctor.

And you, the patient, also have only two choices (without going back to your doctor): Buy the medication you were prescribed, or go without it. Going back to the example, imagine a grocery store where you were only allowed to buy milk in half-gallons, even though the quarts and the gallons are right next to them.

What's more, most pharmacists are often completely unaware of the price of their prescription medications. When you have a different price for each dose of more than a thousand medications, no one will know the price of more than a few. Especially when, as we saw, these prices don't' have to make any sense and can change dramatically for no reason without warning. So the pharmacist is probably unaware of the fact that another dose of the same medication might be a lot cheaper. Most people wouldn't think to ask either because, quite frankly, it doesn't make any sense.

And if you're using insurance (overpaying for most drugs, as we now know), you won't be affected by a sudden spike in the price because your copay won't change unless the medication remains expensive for a long time. The insurance company also won't care because they set up the reimbursement rate with the pharmacy long ago, so it's the pharmacy that gets hit with the extra cost.

Pharmaceutical companies know this.If they only raise the price of a few medications briefly it probably won't be noticed.They also know that they can make a lot of money for a short time each time they do this. Nasty, but in the medical "market," it works.

And sure enough, two weeks later (on December 5), I checked the price again and 150 mg irbesartan was back down to $13.77 for 100 pills. And this isn't the first time I've seen this happen with a medication -- just the first time I've documented it by copying the screen.

Again, imagine if this were to happen in any other market. If the price of gasoline goes up by 50 cents a gallon it's all over the news. Imagine waking up to find gasoline is now $50 a gallon! That's what happens with the price of prescription drugs, and it happens frequently, but you'll almost never hear about it.

So it's true that most people save money if they don't use their insurance to buy generic prescription medications. But there are still tricks they can use if you're not careful. If you do decide to pay cash for your medications, make sure to check the price each time before refilling your medication.

You can always ask your doctor for a different dose (in the case of irbesartan two 75 mg pills or break a 300 mg pill in half). And even more often, there are substitute medications that have exactly the same effect. For example, losartan is also very cheap and is in the same class of blood pressure medications as irbesartan. When used as a substitute, lorsartan will have the exact same effect on your blood pressure and no new side effects.

1 / 6
Get Moving
Exercise 30 minutes a day. Nothing exotic is required; a good half-hour stroll will do the trick, but avoid exercising within three to four hours of bedtime.
Alamy