In December 2006, Mexico’s newly elected President Felipe Calderón declared war against Mexican drug cartels -- words he cemented by sending over 4,000 troops to eradicate narcotraffickers and the cartel violence that had taken hold of his home state of Michoacán.

Almost six years later, the wave of violence in Mexico persists and continues to spread, with government entities recording 21,500 homicides in the first half of 2012, compared to the 25,000 homicides during Calderón’s first full year in office, according to the Associated Press.

But the human toll of the Drug War lies far beyond the U.S.-Mexico border, spreading across the entire Western Hemisphere, no longer only afflicting countries known as the main producers and consumers of the narcotics, but those caught in the middle of the illicit drug trade as well.

Activists against the drug war have therefore also needed to cross these borders, figuratively and sometimes literally leading caravans for peace or banding together in advocacy groups to fight for alternative solutions to the war on drugs and its consequences. Some say legalization, others decriminalization, but all of them ask for peace. Here are some of the faces speaking out against “failed” drug policies in their search for an end to the war. 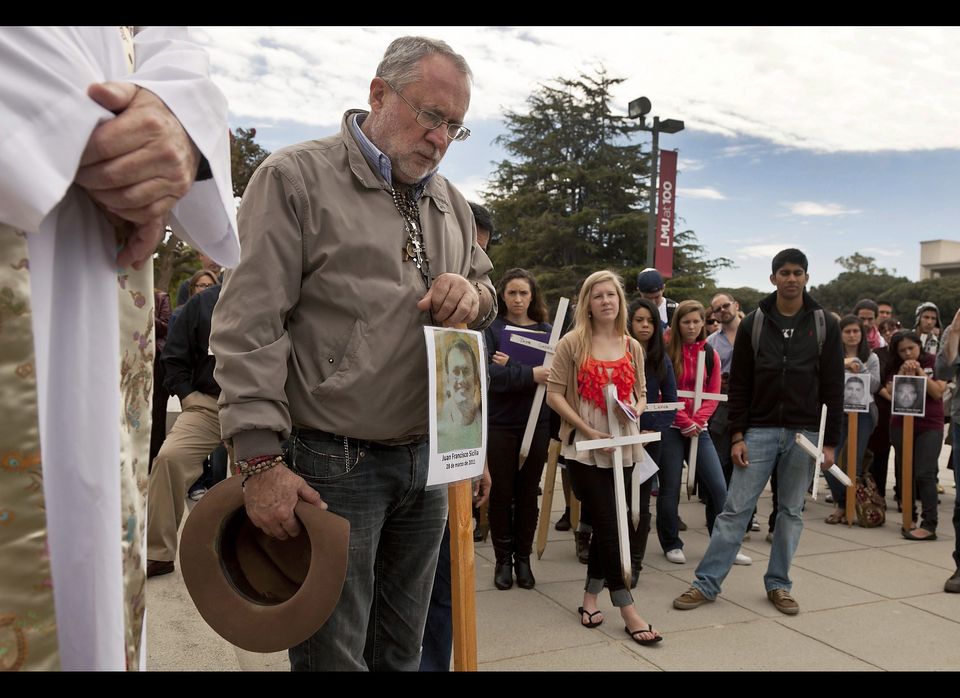 1 / 11
Javier Sicilia, Mexican Poet And Peace Activist
Currently the most spoken about activist within the context of the drug war, the poet embarked on his quest for peace after losing his son in March 2011 to the "failed" drug war. In August he began a month-long trip across the United States with his<a href="https://www.huffpost.com/entry/mexican-peace-activist-le_n_1773315" target="_hplink"> "Caravan for Peace with Justice and Dignity,"</a> a movement calling for the end of Drug War. "It will not be easy to cross the cultural divide to discuss subjects like drug legalization, the illegal production and sale of weapons, trafficking of migrants and money laundering," <a href="http://www.abc15.com/dpp/news/national/mexican-poet-javier-sicilia-prepares-us-peace-march-against-drug-trafficking" target="_hplink">Sicilia told ABC.</a> Photo: Sicilia, the leader of the Mexican anti-drug group Movement for Peace with Justice and Dignity, left, marks a moment of silence for the victims of violence, before leading a 50-cross procession at Loyola Marymount University to raise awareness about the drug wars in Mexico and the United States. The procession is modeled on cross-bearing caravans he has led in Mexico to protest drug-related killings, with each cross representing 1,000 victims. (AP Photo/Damian Dovarganes)
AP