Yes, so America and its allies may have failed in the 100-year war on (some) drugs. We may have spent well over a trillion dollars, imprisoned tens of thousands of nonviolent offenders, caused who knows how much violence and who knows how many deaths in collateral damage, and wreaked havoc on the Bill of Rights. But at least the drug war has provided us with some great entertainment.

Here, a retrospective on some of the greatest (or perhaps most ignominious) moments in drug war propaganda.

1. Have You Talked To Your Dog About Squirrels?

Clever and effective aren't the same thing. Case in point, here. If there really were a drug that allowed owners to talk to their dogs, it would probably be the most popular drug in America.

2. This Is Your Brain On Drug War Nonsense

America's collective cholesterol level soars as confused teenagers wolf down fried eggs in a misguided effort to get high.

"Saved By the Bell's" Jessie Spano channels the Pointer Sisters for some caffeine-pill karaoke.

4. Cartoon All-Stars To The Rescue

5. 'I Helped' Exploit Fears Of Terrorism

Shortly after the Sept. 11 attacks, the Office of National Drug Control Policy launched the "I Helped" campaign, a shameless effort to recharge America's failed war on drugs by linking recreational drug use to terrorism. (In fact, both the U.S. and the United Nations sent foreign aid payments to Afghanistan just months before Sept. 11 after the Taliban "banned" the growing of opium poppies.)

The ads would later run during the 2002 Super Bowl, just after a halftime show which featured the band U2 singing over a scrolling list of 9/11 victims.

The Partnership for a Drug-Free America hits a triple: an ugly racial stereotype, a Biblical allegory and some imagery pulled straight from the nightmares of children.

Cocaine is like eating your own brain. Or something.

This one is from New Zealand.

8. Teen Crawls Out Of Woman's Vagina

Probably the weirdest of the "talk to your teens about drugs" genre.

In the 1980s, the Reagan administration began paying TV networks to work anti-drug messages into their programming, a policy that continued well into the Clinton administration. Poor Mrs. Garrett would never be the same.

"Reefer Madness" is really the standard by which all great drug propaganda ought to be judged.

Thanks to the Swisher urinal screen company, there's really no part of life too intimate for an anti-drug message. 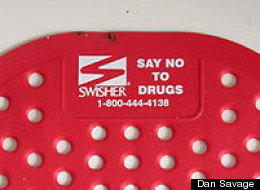 It's probably best to say "no" to anything Pee Wee Herman offers you in a darkened theater.

Among the apparent dangers of pot: Late-night impulse buys from QVC.

Continuing with the monkey theme, here's one of the first ads from the modern drug war. To be honest, the first monkey is pretty terrifying, too.

More prime time messaging from the 1980s. Later in this episode, Nancy Reagan shows up.

One of the earlier attempts to turn the Baby Boomers on their own hippie history.

The ONDCP warns us that smoking pot could cause our significant others to leave us for space aliens. Also works as a Rick Santorum campaign commercial about what could happen after gay marriage.

An apparently stoned Sonny Bono warns of the dangers of pot.

In the 1980s and 1990s, the media went crazy over "crack babies," kids whose lives were irreversibly ruined by mothers addicted to crack during their pregnancies. The hype resulted in a number of awful, reactionary laws, including more mandatory minimums, and drug testing in maternity wards, which could result in new mothers losing their children and facing criminal charges.

Of course addicted newborns need more treatment and care, and no one would argue that it isn't tragic when it happens. But the stories tended to be overly sensational, opting for shock and worst-case scenarios over a sober assessment of the problem.

It wasn't the first time the media had bought into propaganda aimed at dehumanizing drug offenders. In 1972, the New York Times ran a six-page feature on "heroin babies." The Times article described in lurid detail a trembling, clenching newborn -- "a tiny rat of a thing" --who scratches and claws at his own skin. It included an illustration of an alien-looking fetus getting a fix, with the caption, “An artist's conception of the elements in a growing form of urban tragedy: a newborn child, and a glassine bag of heroin.”

The Times painted the mothers as indifferent, zombified monsters who “have no joy of motherhood.” Without even an anecdote, much less empirical data, the article reported that some mothers inject their babies with heroin to stop them from crying and that, “It is apparently not even uncommon for an addict to sell her children for drug money.” Helpfully, the article noted that “Almost always the mothers are from the black, Puerto Rican, and slum areas of town.”

Were there any long-term effects? The author couldn't say. It was impossible to follow up because of the “fractured” and “disorganized” nature of “for example, some areas of Harlem.”

Not racist enough? The article went on: “Some of the women are so badly disturbed that their behavior resembles that of the famous motherless monkeys of Dr. Harry F. Harlow's study.” The author then describes a study in which monkeys raised without mothers would sometimes “throw the baby against the wall or beat its head on the floor until the staff feared for the infant monkey's life.”

In 2009, the Times ran an article on a series of long-term studies of "crack babies." The studies found that not only did children born to addicted mothers not encounter the much-hyped physical and developmental problems, but in many cases, the biggest obstacle the children faced was the stigma that came with being called a "crack baby."

Showing that the media never seems to learn from its mistakes, we've recently seen scare stories about "Oxy babies," such as this one from USA Today in which politicians proclaim their fears -- apparently without irony -- that these infants will turn into the next crack baby epidemic.

And let's not forget the "meth babies." 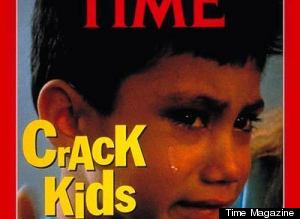 Addiction is like a creepy pet that clings to your leg. Or something.

The National Institute of Mental Health attempts to illustrate the dangers of hallucinogenic drugs, and ends up making tripping look rather enticing.

This spot first appeared in 1967. Forty years (and over $1 billion) later, a Congressionally mandated report will show that the government's anti-drug commercials not only hadn't stopped drug abuse, they may have actually encouraged it.

As Mexico's U.S.-encouraged military crackdown on drugs in the mid-2000s spurred an epidemic of violence, including tens of thousands of homicides, current and former U.S. officials insisted that the carnage was a good sign that the crackdown was "working." Bravely, U.S. drug warriors were willing to sacrifice 50,000+ Mexican lives to keep Americans from getting high. 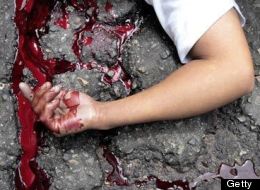 Finally, HuffPost investigative reporter and one-time Opie Taylor doppelganger Radley Balko uses amazing special effects to warn about the dangers of hallucinogens. This was a school project. He got an "A."