It starts with the unmistakable sounds of a helicopter and law enforcement officers communicating via radio.

A group of men in an inflatable raft have been spotted in the Rio Grande River, the body of water that divides Texas from Mexico, and others with packages are flailing in the water nearby. Then the video cuts to an image of five words: “We Are In A War.”

What follows is a video mash-up of excerpts from border residents' testimonials detailing "drug-war spill over violence." Texas Agriculture Commissioner Todd Staples announced in late August that he plans to release each testimonial over the course of the next 14 weeks. The border stories will be posted to a state-controlled website, ProtectYourTexasBorder.com, where related reports, maps and presentations already live.

While little, if any, mention of the United States' decades-long drug war or Mexico's more recent efforts to control drug cartels will likely be made at the Democratic National Convention in Charlotte this week, Republicans and Democrats are waging a highly partisan battle over just who is telling the truth about life in the border region. Staple's video campaign is just one gambit.

"This, for me, is not about politics," Staples, a Republican, told The Huffington Post. "Farmers and ranchers that live and work on the rural stretches of our southern border are facing things that are hard to imagine in the United States: property damage, theft and intimidation on a regular basis. Washington seems to be turning a deaf ear."

Texas, home to 1,241 miles of the nearly 2,000 miles that constitute the U.S.-Mexico border but less than its fair share of border patrol resources, is under attack, according to Staples and other people living and working in the area.

Drug cartels, in claiming territory, moving drugs and undocumented immigrants into the U.S., and exacting revenge on those who get in their way, have made life in the area unpredictable and utterly unsafe, Staples said. The ferocious and bloody drug war that according to Mexican government data has already cost more than 50,000 Mexicans their lives over the last five years, is spilling over into the United States, Staples said.

The videos, the website and a series of closed meetings (no reporters or unknown members of the general public have been allowed access, for what Staples' staff said are safety reasons) for farmers and ranchers that began in March 2011 have created a space where many right-leaning -- or as one rancher told The Huffington Post, "right of the Republican Party" -- residents spend time calling for increased federal spending.

Overall border security spending and staffing have expanded dramatically under the Obama administration, according to federal data.

Many Democrats say that increased staffing and technology such as unmanned drones and camera-equipped blimps have brought the country closer to an impenetrable border than it has ever been before.

In May 2011, Obama came to El Paso and gave a speech that Staples and others mention often.

We now have more boots on the ground on the southwest border than at any time in our history. The Border Patrol has 20,000 agents -- more than twice as many as there were in 2004, a build-up that began under President Bush and that we have continued.

They wanted a fence. Well, that fence is now basically complete.

And we've gone further. We tripled the number of intelligence analysts working the border. I've deployed unmanned aerial vehicles to patrol the skies from Texas to California. We've forged a partnership with Mexico to fight the transnational criminal organizations that have affected both of our countries. And for the first time we are screening 100 percent of southbound rail shipments -- to seize guns and money going south even as we go after drugs coming north.

When the president mentioned the moat, some people in the audience laughed.

Mike Vickers, a veterinarian who wears a cowboy hat and occasionally fatigues, owns a ranch about 70 miles from the border in Brooks County, Texas. He wasn't at the speech, but he was not amused.

"Barack Obama's claim is laughable, if not an outright lie," said Vickers, whose land sits near a highway often used by drug traffickers to move drugs, money and weapons north and south of the border.

The White House did not respond to a request for comment.

Vickers is one of about 30 people who have shared their experiences in the border region as a part of Staples' project. He also leads The Texas Border Volunteers, a group of mostly border-zone farmers and ranchers who every few months spend two weeks camping out and surveying the thousands of miles of private property near the border for evidence or actual sightings of drug and human traffickers and their routes. Then they report what they see or summon law enforcement on the spot, he said.

Vickers added that sometimes they also rescue migrants who are struggling to cross the mostly desert-like border terrain because they have lost their way or opted to separate from a group after being threatened or assaulted. Other times, they use spotlights and megaphones to corral undocumented immigrants and hold them until border patrol or state or local law enforcement officers can arrive.

On Thursday, Vickers got a call from his wife as he drove home. She had just set the couple's dogs out in their front yard to hold a group of undocumented immigrants, some of whom she thought might be drug smugglers.

"I know what I see," Vickers said, "and I have heard much worse from other ranchers out here who have been told to stay out of sections of their own land, who've had firearms brandished at them and shots fired by these cartel thugs who want to move people or drugs, or both. Nobody is imagining things."

It all sounds harrowing and understandably frustrating, said Ricardo Ainslie, a University of Texas Austin psychologist who studies communities in crisis. Ainslie spent the last two and a half years collecting the stories of people living in the border zone. Ainslie spent most of his time in (Ciudad) Juarez, Mexico, a city of about 1.3 million people across the border from the West Texas city of El Paso. (Dallas and San Jose, Calif., are of comparable size.)

Juarez has seen well over 2,000 people killed each year in the drug war, he said. In 2009, that figure peaked at 2,754 murders, according to El Diario, the city's major newspaper. The number of murders in Juarez fell to 2,086 last year, a 24 percent drop.

In November 2011, the Austin American Statesman, a newspaper serving the state capital, analyzed crime data for each of Texas' 14 border counties in the period between 2006 and 2010.

All told, violent crime dropped by about 3 percent in the border zone, compared to a 12 percent drop in crime statewide.

"Who wouldn't be afraid if you heard of beheadings 10 miles from your town?" said Ainslie, whose book, "The Fight to Save Juarez: Life in the Heart of Mexico's Drug War" will be published in March. "But this entire conversation is filled with hyperbole and is just entirely politicized." 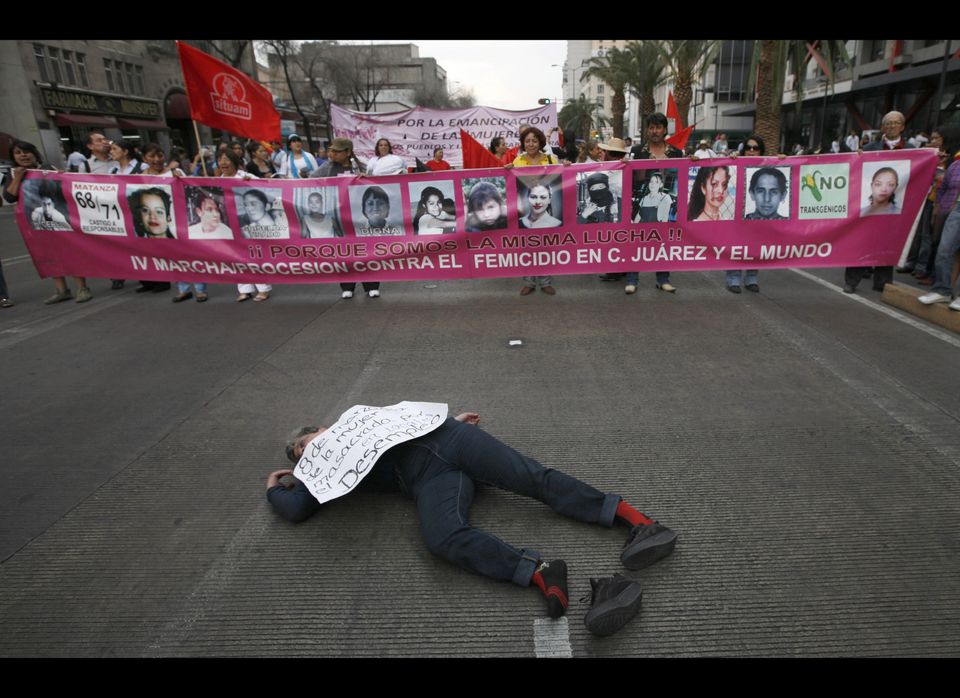 1 / 13
Carrying images of women killed in the border city of Ciudad Juarez, demonstrators march as a woman lies on the ground during a protest marking the International Women's Day in Mexico City, Thursday March 8, 2012. A campaign for justice is waged by relatives of women killed in Ciudad Juarez, where dozens of victims were tortured, raped and killed prompting a women's rights movement that garnered international attention. (AP Photo/Marco Ugarte)
AP