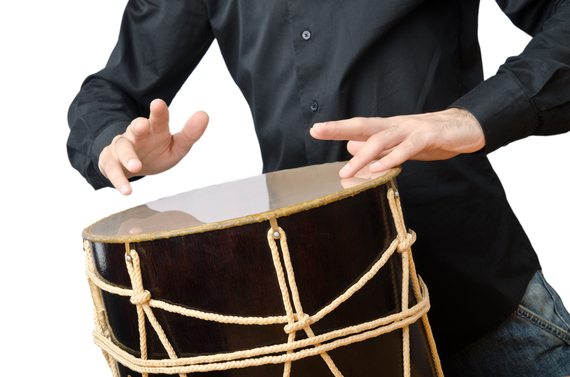 I have what famed Cream drummer Ginger Baker calls the "gift of time." I'm not bragging, by any means. It's just that I have always had an instinctive ability to keep a beat -- at least at the level of an amateur drummer. That skill crosses over to my business in that I have found that rhythm is an integral part of any speech, story or presentation. Stay with me.

Sometimes you can speak at the speed of a gushing river, but if you keep that up you'll lose the audience. Eventually, rapids fade and the water slows and pools. Think of this image when you communicate. Vary your pace.

Let's look at Robert Frost's rhythmic genius in his two-line poem called The Span of Life. Read it out loud:

The old dog barks backward without getting up
I can remember when he was a pup.

This masterpiece of brevity scans as follows, with the stressed syllables in bold:

The rhythm in the first line is quite strange, with four accented syllables in a row at one point. This forces us to slow down, awkwardly, like the old dog himself. The next line accelerates, however, with a regular drumbeat mimicking a frolicking pup. Here we have the aging process in reverse, in just 16 words, with language that is rather prosaic on its face. Frost would have been a great drummer.

Ditto Winston Churchill. Here's part of his Finest Hour speech from 1940. Again, read it out loud:

Churchill captivates us with monosyllabic old English words that arrive with the insistence of a bass drum. Does this seem simple? Try it and you will see how difficult it is. So much of the meaning depends on the tempo.

Though I have been a percussionist ever since I was a young lad, I never learned to read drum music until recently. I had no choice when I started performing with a parent-student-teacher band in the town where I live in Massachusetts. I was hoping to be able to follow along with the melody, but was horrified to see that the sheet music just showed the percussion parts with no other references. Needless to say, there are gaps, sometimes large ones, where I had to stand by and wait - counting each measure in my head. Coming in at the wrong time, especially with something as noticeable as crash cymbals, could be very embarrassing.

Then I thought about the significance of this. There is a time to speak, and a time to remain silent. A time to pound and a time to pause. This has vast implications for communication.

If you want to learn more about rhythm, by the way, listen to Babatunde Olatunji, Buddy Rich or the virtuoso Conga Kings -- Patato Valdes, Giovanni Hidalgo and Candido. Another suggestion: imitate the metrics of poetry when you write or speak. For instance, read this aloud: rhythm is as rhythm does.