The whole purpose of having a manual of psychiatric diagnosis is to promote diagnostic agreement. The great value to the field of DSM-III was that it established reliability and preserved the credibility of psychiatry at a time when it was becoming irrelevant because it seemed that psychiatrists could not agree on diagnoses. Everyone knew that the reliability achieved in DSM field testing far exceeds what is possible in clinical practice, but DSM-III took the major step of proving that reliability could be achieved at all. Until now the DSMs have facilitated communication across the clinical/research interface, promoted research, and provided credibility in the court room.

But bad news was recently reported from the annual meeting of the American Psychiatric Association in Philadelphia. The hard-won credibility of psychiatric diagnosis is compromised by the abysmal results reported by the DSM-5 field trials. This failure was clearly predictable from the start:

The results of the DSM-5 field trials are a disgrace to the field. For context, in previous DSMs a diagnosis had to have a kappa reliability of about 0.6 or above to be considered acceptable. A reliability of 0.2 to 0.4 has always been considered completely unacceptable, not much above chance agreement. 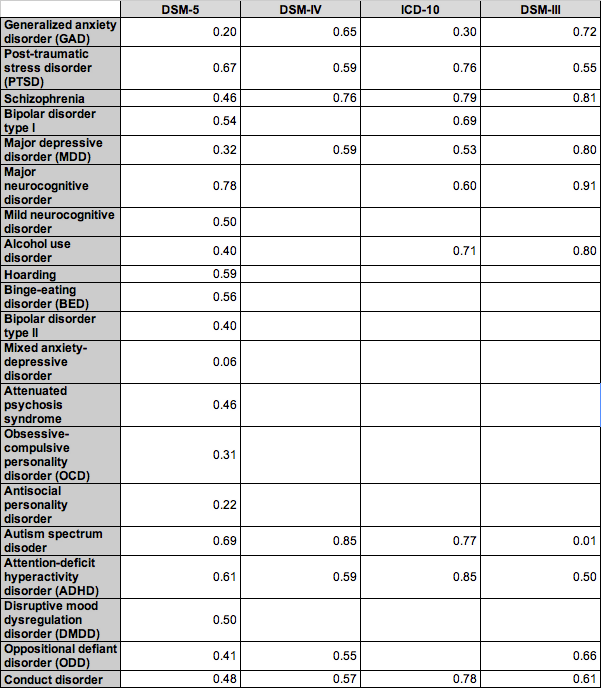 No predetermined publication date justifies business as usual in the face of these terrible field trial results, which are even more striking given that they were obtained in academic settings with trained and skilled interviewers, highly selected patients, and no time pressure (the results in real-world settings would be much lower). Reliability this low for so many diagnoses gravely undermines the credibility of DSM-5 as a basis for administrative coding, treatment selection, and clinical research.

What can be done to salvage this deplorable mess?

I have been consistently pessimistic and critical about DSM-5 since my first piece on it three years ago. The sad thing is I can still be so surprised. Each step of the way I predict it will fail in one or another way. But then I discover that DSM-5 has managed to fail in ways that go beyond my poor imagination. This assault on reliability was predicted, but its scope exceeds even my jaundiced fears and creates a DSM-5 emergency.

Allen Frances is a professor emeritus at Duke University and was the chairman of the DSM-IV task force.