If one day I get diagnosed with Alzheimer's or another type of dementia, I don't want to be told that I am "demented," or that I have "dementia."

Dementia is a loaded word, one that carries with it the baggage of hundreds of years of gross associations and misunderstanding of the reality of the person living with the illness. Google the word "dementia" and you get right to its Latin root: originally meaning "madness," from de- "without" + ment, the root of mens' "mind." Similarly, "demented" is synonym with "mad," "crazy," "insane," "lunatic." An estimated 5.4 million Americans are currently living with Alzheimer's dementia, that's a lot of people unjustly deemed crazy... From calling those folks insane, to treating them as such, only a fine line that gets easily crossed, both at home and in institutions.

Recent attempts to be gentler and more accurate in the labeling of the condition have not been successful. "Memory care," the current, more politically correct way of referring to dementia care, fails to capture the full range of cognitive deficits associated with dementia -- deficits in the areas of attention, planning, decision-making, language, construction and visual perception, social cognition, learning and yes, memory also. Furthermore, for some dementias -- vascular, frontotemporal, Lewy Body, etc,, memory loss is not even the primary feature.

Hope is on the horizon thanks to the work from the DSM-5 task force, a select group of mental health experts responsible for updating the DSM manual. The Diagnostic and Statistical Manual of Mental Disorders (DSM) is the reference book used by medical and mental health professionals to diagnose Alzheimer's and other types of dementia. Proposed changes include replacing the "dementia" name in favor of the new term, "major neurocognitive disorder" (MNCD).

Along with the renaming is a more sound rationale for the criteria used to make the diagnosis. The DSM-5 task force says: 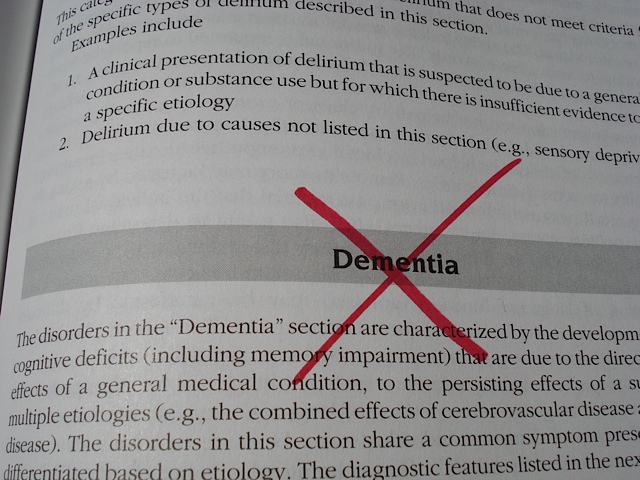 I like that. Imagine being in the neurologist office now, and the doctor gives you a major neurocognitive disorder diagnosis. The blow is still going to be hard, but not as bad as being hit with the D-word. I find it heartening that the medical profession is finally acknowledging the pejorative or stigmatizing connotation of the word "dementia." The DSM-5 is scheduled for publication in May 2013.

While the transition to the new manual will take time, one can only hope that the new formulation of dementia as NCDP will be quickly embraced by key influencers in the heath care system: insurance companies, hospitals, geriatricians, psychiatrists, neurologists, primary care doctors, nurses and social workers. It will also be up to the media to broadcast the new wording and to explain its significance to the lay audience, particularly family members. One single word can go a long way towards removing some of the fear that is currently infusing the landscape of dementia care at home. The mental health of those with the diagnosis depends on it.

Ten, 20 years from now, we will look back and regard "dementia" labeling as one of our greatest acts of insidious cruelty.