“What really lingers with us [...] is their mood of stoicism; or perhaps not their stoicism, but their indifference, or even their resignation -- rather than their energy, their resilience or even their sense of fight,” writes JJ Charlesworth on the new Duane Hanson show at London's Serpentine Sackler Gallery.

Duane Hanson’s sculptures of working-class Americans are bound to make visitors uncomfortable. Lifelike effigies elicit a different sort of response than most artworks. We find Greek statues majestic but wax figures rather sinister -- never mind that both take humanoid forms. 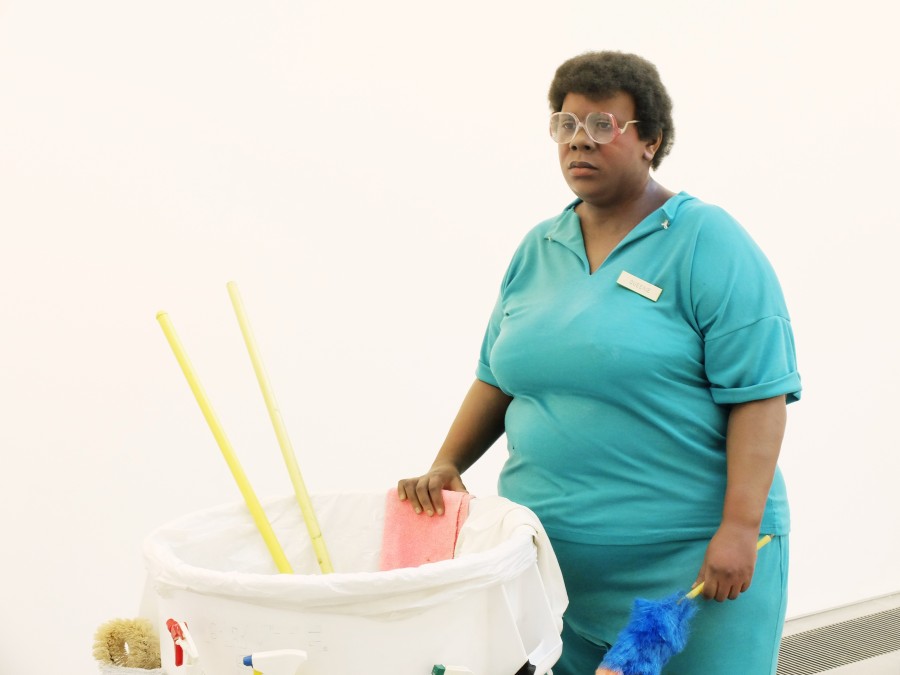 Hanson’s work, though, creates a subtler type of discomfort, one that stems from the subjects he’s selected -- and how their portrayal contrasts with the lives of gallery visitors. JJ Charlesworth's piece for artnet begins to unpack that discomfort, asking important questions about how artists represent people and the ethical weight attached to capturing different human realities.

Though he never embraced the label, Hanson is most commonly associated with hyperrealism, a movement that stresses, even exaggerates, the exactitude of art objects to life. It's a style that seems exempt from moral judgment. If the artist is merely conveying reality, how can he be ethically culpable? If a critic takes issue with the artwork, isn't he just shooting the messenger?

Charlesworth questions that presumption when he describes Hanson’s work as “naive social realism” and “endlessly well meaning.” This language merits close attention. It points out a subtle difference between artistic intention and result, between a sculpture in the studio and a sculpture in the world. Naiveté always means well, but when innocence comes into contact with less benign forces, it can quite quickly run afoul. 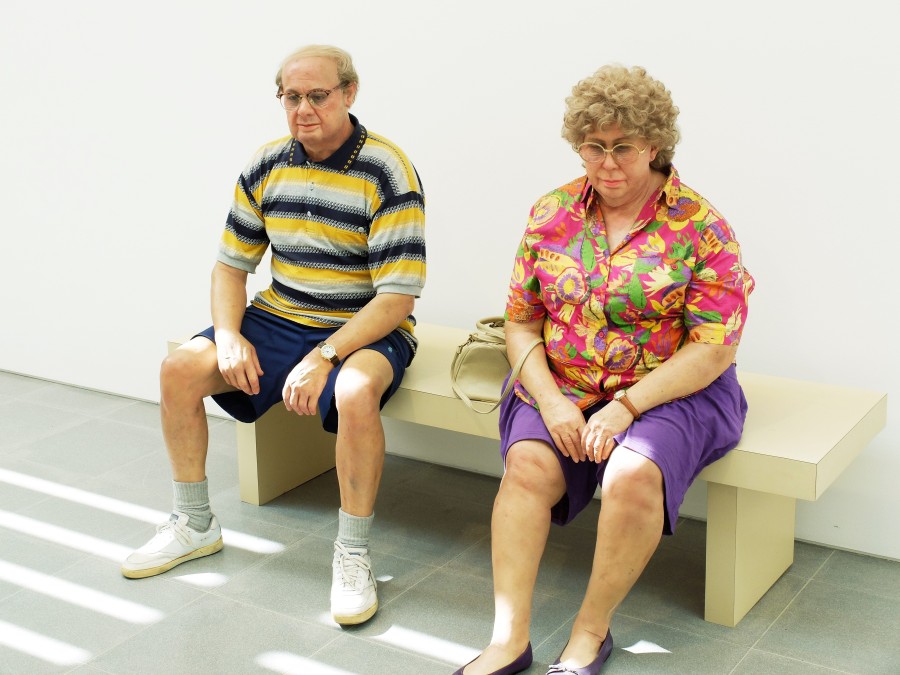 Those forces, in this case, are the Serpentine Gallery and the viewers who fill it: wealthy jet-setters, or, at least, cultured aesthetes, quite distant from Hanson’s working-class Americans. Is this disparity a problem? A generous interpretation sees the sculptures as elevating the experience of lower- and middle-class Americans to the status of high art. A less generous one spies objectification: real people packaged into something palatable for the elite. Most Hanson commentary opts for the former.

"Through his work," a 2014 exhibit description noted, "Duane Hanson explores current issues of American life, the frailties of humanity, holding a mirror to society." The works "transform the banalities and trivialities of everyday life into iconographic material," commented one blogger on Juxtapoz.

It's worth looking, though, at who examines that iconography, at how radically different the mirror's reflection is from the face of the viewer. 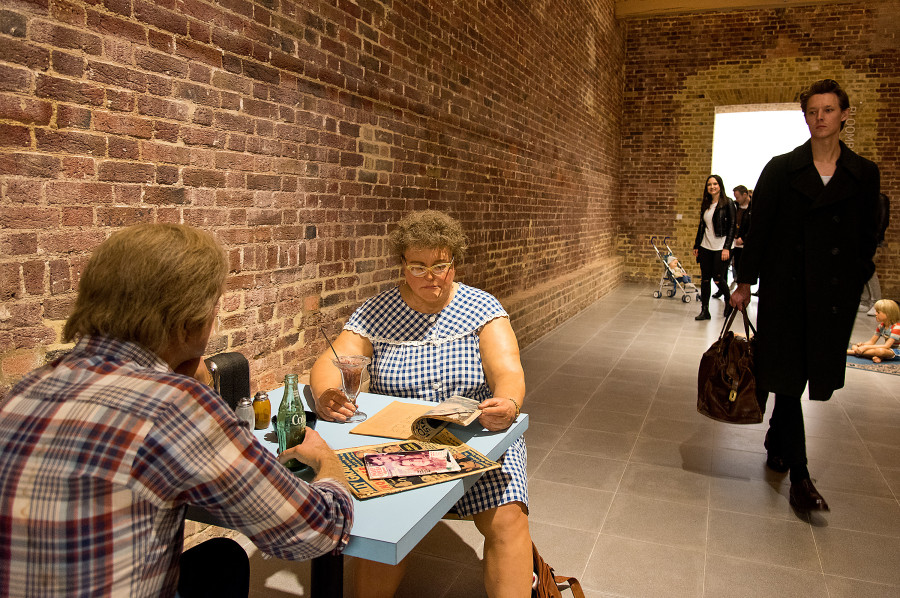 The most striking disparity between the subjects and objects -- to risk being obvious -- is movement. Viewers, of course, always circulate while sculptures remain still, but the languid apathy of Hanson’s figures has been exaggerated. Art can be dynamic, postures can imply motion, but his works display, in Charlesworth’s words, “indifference” and “resignation.” They seem oddly content with their lots in life, neither despairing nor fighting proudly, but simply moving, glacially, through.

On the other hand, there’s the buzzing energy of those attending and working at galleries. Analysis clutters the air, comparisons flying to shows seen across the city or the world. What conclusions will those vivacious gallerists reach? “It's a melancholic ode to the gentle, existential weariness of ordinary life,” says Charlesworth, reiterating the passivity, the slowness portrayed in that working-class life. If ordinary weariness is gentle, what do we make of those blessed with non-ordinary lives? Elites, it would seem, have fiery, more intense existential concerns. So the gallerists leave reassured in their vitality, perhaps meditating on the simplicity of others, but never granting them full subjecthood. 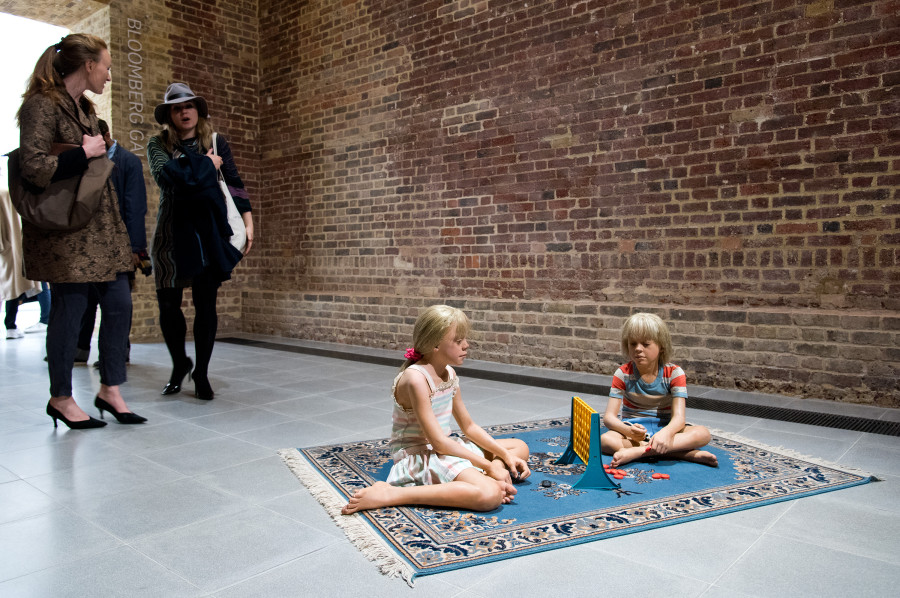 That denial of subjecthood has a great deal to do with the term “average,” often used to describe Hanson’s work. It’s intended to complement the way he's tapped into an unseen, but prevalent, American subject. But “average” is also a notorious blanket term, covering multitudes of specific and individual experiences with a single (empty) word. Examined one by one, each experience would brim with history, with energy and flair. Only when reduced to “averageness” does the working-class American fade into indifference.

A recent Guardian piece by Douglas Coupland took a more sympathetic approach to the show, differentiating between the terms “archetype” and “stereotype.” Hanson’s work, he argued, reveals archetypes or accurate representations of groups -- whereas stereotypes are exaggerated forms of that accuracy. Archetypes, though, fail to grant subjecthood any more than stereotypes; they hold onto the idea that diverse lives can be subsumed under a single label. 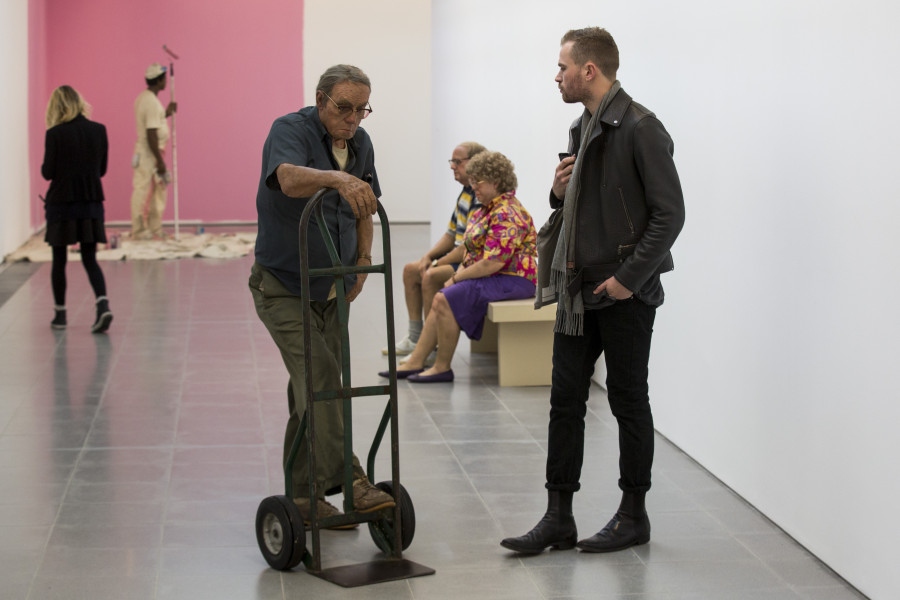 That’s a natural human tendency, but gallery visitors would never let themselves fall prey to it. People like that have a habit of denying all labels, of asserting their fundamental individuality. But the sculptures they look at, in the words of an International Business Times piece, are "representative of an entire labour force, class or even a nation." Only averageness, with its gentle despair, accepts an archetype and surrenders its individuality.

What’s tricky, here, is that the issue of representation hinges less on Hanson’s intention than on the conditions into which his work arrives. Charlesworth notes the artist made an active effort not to engage with the high-art world, but that ignorance may ultimately be the show’s downfall -- not its virtue. By ignoring the role of audience, it fails to reconcile how its objects interact with the social space that surrounds them. Of course, art cannot predict its viewership, but in an age where the viewer, rather than creator, determines a work’s cultural significance -- the reception context cannot be ignored. 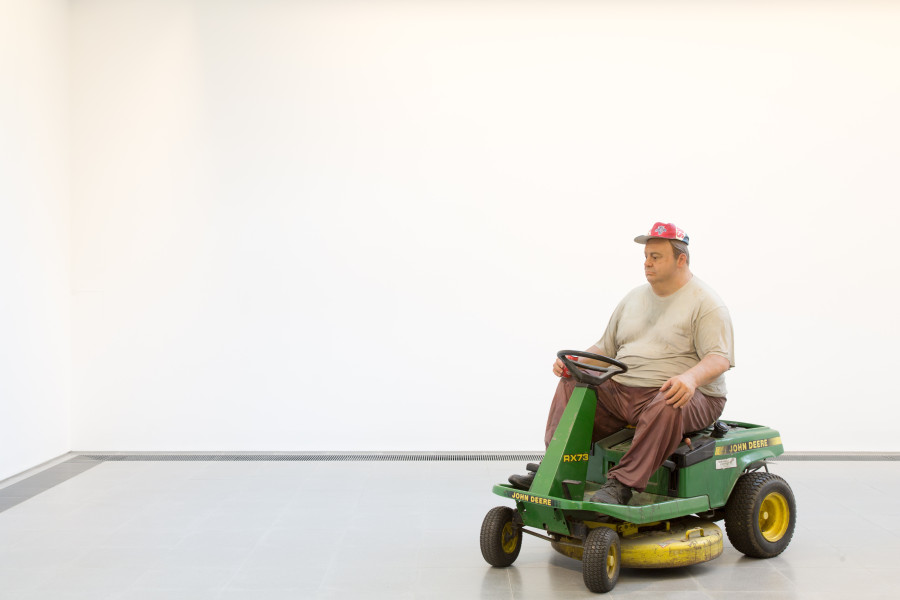 This is far from the fate of all hyperrealist art. Denis Peterson, too, brought unacknowledged subjects to the gallery, but his works are arresting, forcing viewers to confront genocide, homelessness, and totalitarianism. Gottfried Helnwein's images of children reckon with innocence and victimization. His Holocaust work is a horrifying wake-up call beneath a hyperrealist guise. There's even more dynamism in Hanson's earlier pieces, which captured race riots and the Vietnam war in enormous tableaux. His 1965 "Abortion" scandalized the art world, catching a reality that shook visitors instead of letting them glide casually away.

Realism, in those works, was far from naive. There were serious stakes to portraying those truths, and the artists used the complexity of individual identities to highlight those stakes. But at the Serpentine, it's average indifference that shines through. Hanson’s pieces are held casually opposite from guests, ensuring a hierarchy of class and energy between the subject and object. Rather than challenge that hierarchy, they apathetically affirm it. In a sense, this not a condemnation of his work. Far from it. His sculptures, rather, show how even the best-meaning realism can go astray -- when it ignores the reality of its viewers. 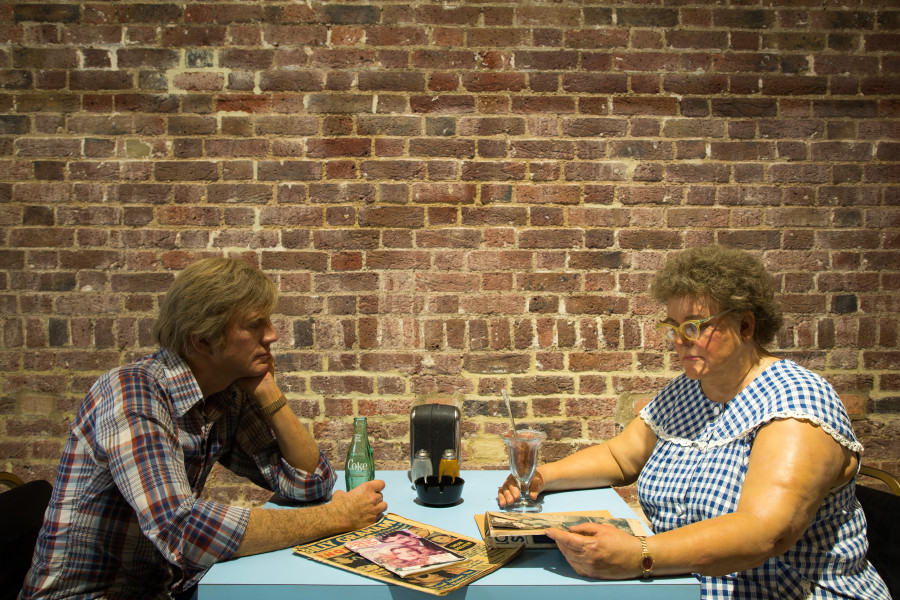 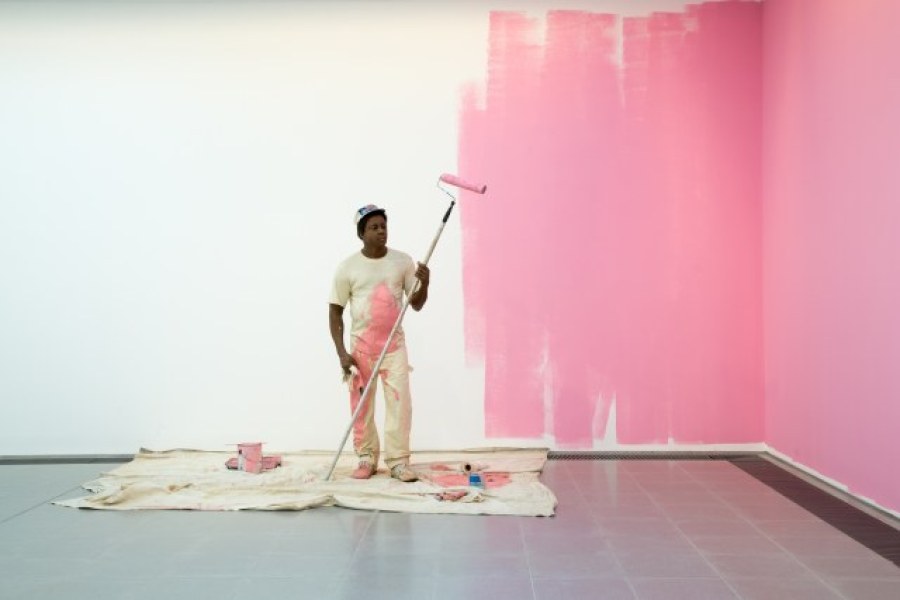 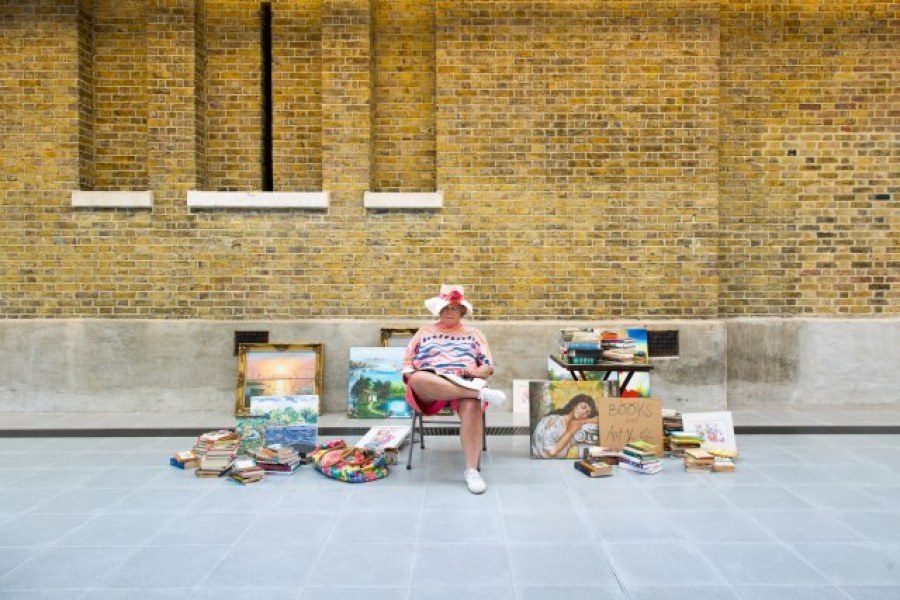 All otherwise uncredited images are courtesy of Serpentine Galleries.