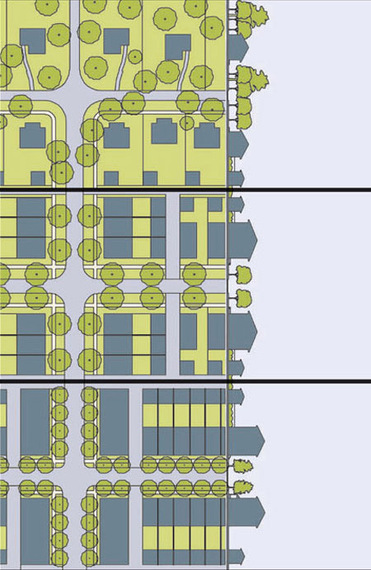 "The promise of suburbia -- to live in nature amid the easy flow of cars -- has been betrayed. Sprawl is not sustainable; its growth chokes on itself," argued architect and urban planner Andrés Duany at the Congress for New Urbanism in Detroit.

Duany calls for using New Urbanism, an approach he and others have promoted for the past few decades, in order to "preserve nature." New Urbanist developments can preserve nature because they can "make cities places people love to live in," so they stop moving to the suburbs, contributing to sprawl. New Urbanist communities, he argues, are also inherently healthy and just, because there people "walk, so they don't get fat," and "you don't need a car to get around." In contrast, car-based communities are "un-just," because the old can't drive cars and the poor can't afford them. Some 50 million Americans don't have cars.

New Urbanism can also result in a more balanced relationship with nature. "In Europe, they had to integrate with nature. In contrast, in America, our relationship with the wilderness has been adversarial." But Duany argues that if we use his model of the transect, which shows how cities can become denser as they move from untrammeled nature on the peripheries to dense urban cores, "we can bring nature into the city. Wildlife habitat can be assigned everywhere. The transect is also for bringing nature in."

Sprawl, Duany argued, is rooted in a dendritic, inefficient, car-based system that must be overthrown with a new grid-based, walkable system. Furthermore, it's one system or the other: "sprawl and new urbanism are incompatible and can't be intermixed."

Unfortunately, the "enemy" -- sprawl -- is backed by a range of "powerful" forces. There are "whole professions, like traffic engineers, who are vested in this system." The solution is to provide these "administrators" with a new set of guidelines they can manage. "They just want to administer something. Let's just change the manual, and then we can change what they administer."

He envisions New Urbanist communities in which there are multiple choices that coincide with human nature, and the stages of life. These communities have a dense core that can sustain nightlife, which is critical for young people, "whose job it is to date and mate." Once they've mated, they find a starter home, perhaps just out of the core. As they grown older and wealthier, they move closer to the periphery, where they have a larger house immersed in nature. Then, when they retire, they move back into a smaller apartment in the urban core.

Furthermore, human nature is to form hierarchies, and New Urbanist communities simply enable that basic tendency. "We can break up communities into wealthy mansions, mid-range, and low-range housing." But for Duany, the key is they all live near each other in walkable communities, which enables a local economy, e.g. the maid and nanny live walking distance from the mansions. Duany is also all for allowing people to chose whether they want to live in a homogeneous or diverse community.

Duany said New Urbanists have enabled these kinds of neighborhoods by participating in writing the U.S. Housing and Urban Development (HUD)'s Hope VI standards, which enabled 270,000 units of affordable housing to be added in a subtle way to mixed-income communities. "We can integrate but keep the housing for the poor to 10-20 percent."

He concluded that 30-60 percent of Americans want to live in New Urbanist developments where this kind of set-up is possible. "We just need to level the playing field to let the market operate." In these communities, "life is better; people are more satisfied."

F. Kaid Benfield, senior advisor to PlaceMakers, and author of the great book People Habitat: 25 Ways to Think About Greener, Healthier Cities, followed Duany, making many of the arguments outlined in his book. However, he further emphasized the need to better "integrate nature into the urban fabric," perhaps going beyond what Duany and the New Urbanist's transect offers. "We need nature inside cities, the kind that fits well." For Benfield, that largely means mid-size (8 acres or less) and pocket parks, along with lots of trees, green complete streets, and all other forms of small-scale green infrastructure. As an example of a perfect-sized park, he pointed to Russell Square in London, "which is a great size -- just small enough to reach but large enough to escape in."

While landscape architects and designers may find some things to agree with here, what was left out of this discussion was the idea of cities as ecosystems. University of Virginia professor and author Tim Beatley, with his biophilic urbanism, shows that dense, walkable cities like Singapore and Wellington, New Zealand, can also be more biodiverse and create those rich connections to nature that sustain life for many species, even in cities.