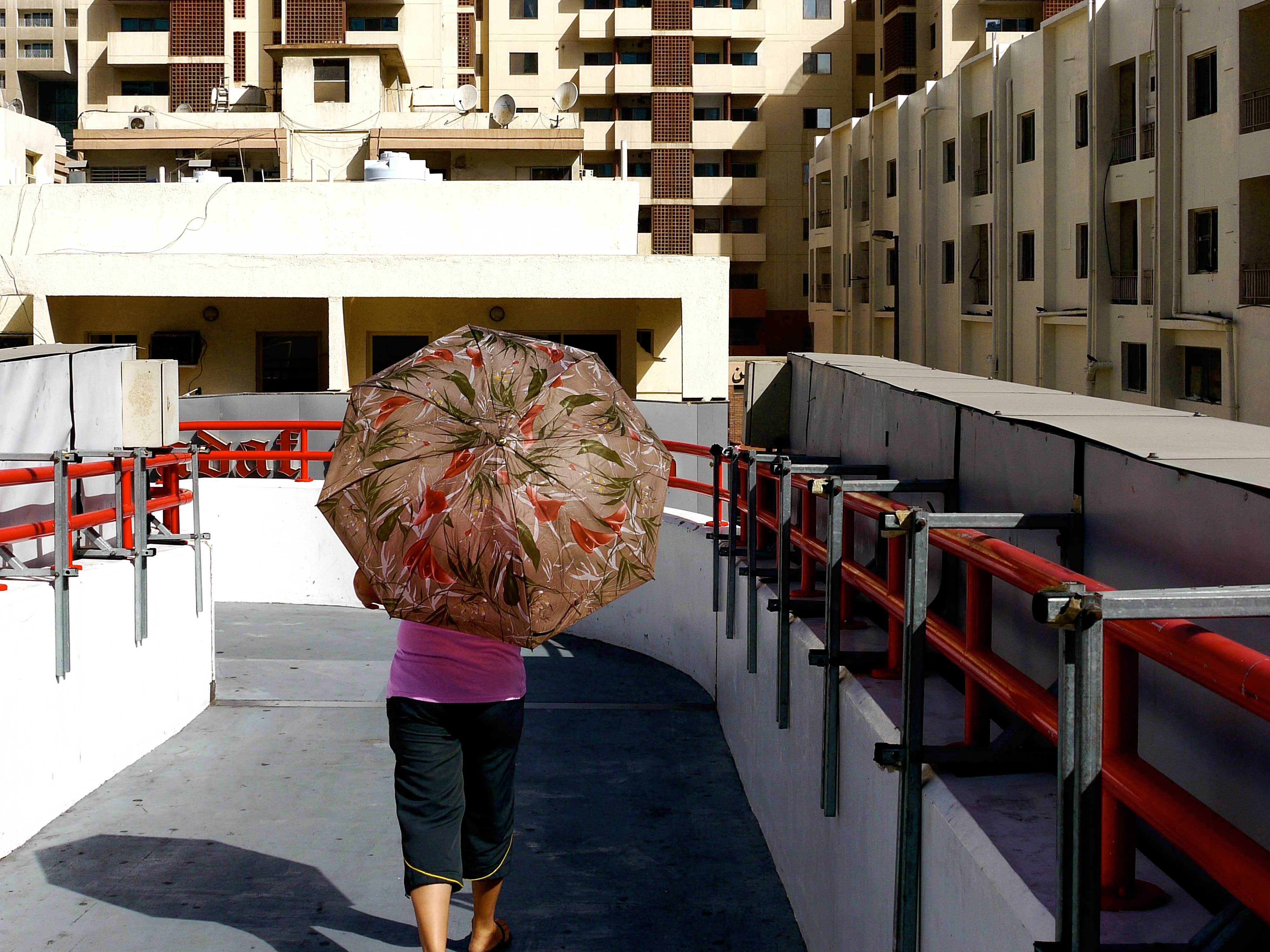 Leaving my house earlier than normal this morning, I found the nearby shopping street eerily quiet. Amsterdam's center wakes up late because it's more about entertainment than general commerce. Opposite Rembrandt's house were three Latin American men occupying sidewalk benches usually claimed by tourists. Each had an overpacked duffle bag and work boots. The men were apparently waiting for a pick-up, and, to my eye, they might have been people whose daily wages are deemed illegal. Or maybe theirs were legal. In either case the question was playing out in the light of day, but a light that most people of central Amsterdam sleep through.

Discussions about the globalization of labor often distinguish between a here and a there. When it is about home, the conversation is framed as 'labor issues', and when it is about somewhere far away, it more quickly employs disquieting terms like 'human trafficking.'

Around another corner from my house is Amsterdam's red light district. Municipal leaders want to clean the neighborhood up. It can get rowdy there: soft (and hard) drugs easily bought; sex even more easily bought; and then the rowdiness and messiness that traveling mischievousness can provide. Change, the politicians say, is needed: fewer prostitution windows, less hash smoke, more boutiques. In addition, they assert, there is a graver, moral issue at hand, namely that there is a good deal of human trafficking going on in the district. The thought of such a thing happening in Amsterdam is powerful enough to silence even the staunchest critics of gentrification. Whenever the term is used, however, details remain vague. Listeners are left to fill in with their own imagination. That's easy to do.

To mention human trafficking conjures up graphic images of abuse, suffering, torture and other marks of evil. But while the accusations remain obscure along Amsterdam's canals, there are those who do not hesitate to incriminate, with a glaring certainty, goings-on in a city like Dubai. These are the kinds of contradictions and disconnects that crossed my mind reading Pardis Mahdavi's recent book Gridlock, which takes on the issues of migrant labor and human trafficking in Dubai.

Mahdavi, at times, seems like another academic interloper in Dubai, but she has written a thoughtful book about the city at a moment when several other American university professors have issued their own. She makes a few wince-causing mistakes (like getting Dubai's weekend wrong and confusing Sheikh Rashid al Maktoum with Sheikh Zayed bin Sultan Al Nahyan), but these can be put aside for what she achieves.

One historical matter that Mahdavi doesn't consider is the fact that Dubai's growth was defined by migrant populations before anyone talked about a 'globalized economy.' The city's mid-20th-Century modernization is largely a result of its migrant population, from the builders of its first bridge to the investors who bankrolled that bridge. Most of those people never expected to stay long in Dubai, and many did not. Dubai was one of the first cities to show us that assumptions about citizenship, about belonging, about home were to be turned on their heads.

Mahdavi does not dwell on questioning this increasingly accepted global condition, but she rightly calls on us to be aware of oversimplifying what is happening. Like many before her, she acknowledges and presents explicit examples of where things go wrong. Some of her portrayals of people she interviewed are harrowing, but what seems to anchor her descriptions in reality is her balanced understanding of the situation and, daresay, appreciation for what Dubai has afforded many migrants. She is not presenting people whose dreams have been shattered, but people who have made difficult, yet calculated, decisions to improve their situations:

Discussions about trafficking also reveal a xenophobic dimension; namely, that women from the Third World make the 'irrational' choice to migrate and are duped or tricked into sex work. In my experience, the migrant women I met in Dubai were neither stupid nor duped. Instead, they had made a difficult but rational choice to leave family and loved ones behind in search of wage-earning possibilities, adventure, or stability.

News accounts from places around the world have offered us images of humans living, and dying, traveling in packed containers or under duress. The accounts on their own are heart-wrenching, but in a way they also provide us a deplorable comfort. We are able to separate ourselves from the story. We can develop parallel worlds: a here and a there. Plenty of correspondents are willing to report to us from places where we don't dare to tread: an underground, a dark side, a secret.* But what is more terrifying is that it is all within our reach. In Amsterdam and in Dubai. There is no divide. It is unfurling on my shopping street; it is the person beside me on my next flight.

As an anthropologist, Mahdavi relies on her urban fieldwork -- interviews with over a hundred men and women. Whether via an anthropologist, a Human Rights Watch report or a global-trotting journalist, Dubai's condition has been told many times through the voices that some interests might prefer we didn't hear. But Mahdavi's interviews are convincing. She follows up with her subjects; often even after they have left Dubai. One of her findings is not surprising: that every story is different. It might seem cliché to claim this, but it reveals there is not just one problem and certainly not a blanket solution.

Mahdavi clarifies 'where the heart is' for many expatriates in Dubai. A common criticism, especially from American observers, is directed toward the inaccessibility of citizenship for foreign workers.** Mahdavi's interviews expose this as a minor issue. Almost all of her interviewees have a plan to leave Dubai eventually; they are putting their money aside to help loved ones abroad and then to go home without debt; it is true as much for a British worker as for a Bangladeshi. The book's findings provide nuance for gauging why Dubai functions as it does. That nuance can also generate a more likely means to improving people's lives than tolerating the heavy-footed judgments usually projected toward Dubai.

Any new policies or oversight will inevitably have to simplify things, reduce people to numbers. But that doesn't reduce the danger in thinking that way. Men and women taking on work, whether as domestic workers, construction laborers, or turning toward 'informal' markets, are making decisions with their direct personal interests in mind. That being said, Mahdavi visits a Kerala neighborhood in Dubai; she finds a community that could provide the support to get people through tough situations. My own experience in Kerala, historically a significant source of skilled and unskilled labor in the Gulf, is that there was once a strong support network for workers in Dubai: family and friends. Family members made sure a job was legitimate; recommended fair employers; helped each other out. Mahdavi's findings are looking for solutions that would replace this vanishing support system. She tells us that regulation could help, but such efforts in the Philippines and Ethiopia have mixed results. The answers won't be easy, but thinking more like Mahdavi, in Dubai and Amsterdam, might just get us closer.

* For a striking account of trickery, read Sarah Stillman's New Yorker article about two Fijian women tricked into working for the U.S. military in Iraq.

** Several writers have bungled the fact that Dubai does not grant citizenship, but the UAE does. The question is not whether you become a Dubai citizen, but an Emirati citizen. This is important in measuring the relationship people have with a city versus a nation.