I consider myself a seasoned world traveler. I have visited some of the most exotic and exciting destinations on earth, yet even I was surprised when I visited Dubai earlier this year. How does a nation go from living in the desert lands of the Arabian Peninsula, making a living as pearl merchants, to one of the most futuristic, opulent destinations on earth, in only 46 years? The answer is vision, my friends. One man's ability to see the future of his nation, a prediction of things to come! The man with this incredible foresight was none other than Sheikh Rashid bin Saeed Al Maktoum. 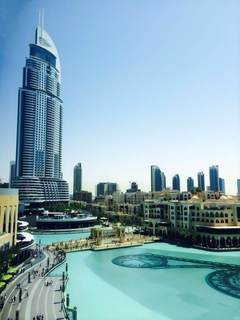 Like most Americans my knowledge of any Arabic nation was largely based on what I had seen in films and television programs, or the one-sided views of media reports. All that changed once I visited Dubai, a member of the seven nations, collectively known as the United Arab Emirates (UAE). This futuristic city rises like a mirage in the desert surrounded by the Persian Gulf, offering a multitude of beach front views. Dubai's journey to its present day success is built around its world class airline. If you have never flown in an Emirates A380 super passenger airliner, you've been missing out.

In the 1980s, the leaders of this small Arabic Nation decided to turn Dubai into the number one tourist destination. Their goal was to be the global aviation hub, transporting millions of passengers through Dubai to all other international destinations. If you build it, they will come is the motto of Sheikh Mohammed. The Emirates built an airport and airline of supreme capacity and efficiency, bringing an astounding 66.4 million passengers to Dubai just over the past year alone! This put the Dubai International Airport (DBX) ahead of London's Heathrow airport as the busiest in the world. Due to the ever increasing demand for flights via Dubai, the new Al Maktoum International Airport is under development that can handle the expected increase in Dubai's visitors over the next decade. 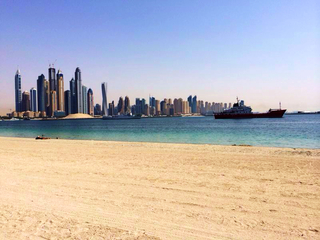 At first glance you get the impression that everything in this city was designed using the latest technology and luxury available, from the multilingual holographic greeter in the high tech airport terminal, to my flight with the Emirates airliner A380, a double-decker jumbo jet considered one of the most advanced airliners flying the international skies today. The design and architecture of this city, with its many glass and steel high-rise towers, shows the same vision and pride in excellence. I was impressed with the superior quality and efficiency of the UAE before I even landed.

Knowing the oil reserves were running out, the Sheikhs of Dubai took a gamble when they looked ahead. They decided to make Dubai a global dream destination, a center of retail and commerce. Developing a city with the best hotels and amenities to attract international tourists was their main priority. The father of Sheikh Mohammed bin Rashid al-Maktoum had the original concept, which his sons continued to build upon. The vision for his country and his people was generous and brave. 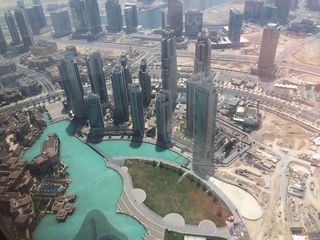 Most of the development has been over the last fifteen years and it's not slowing down. A multitude of tall cranes clutter the horizon and construction crews work shifts around the clock. It makes you wonder what awaits this futuristic city. The recent announcement that Dubai will be the host city for World Expo 2020 caused the property prices to soar to pre 2009 debt crisis values in no time. In 2009 the financial crisis forced many people to abandon everything as they left Dubai. Entire car parks filled with deserted super-cars were a common sight. The Abu Dhabi $20 billion bailout helped Dubai bounce back and some say this could be another investment bubble, but this has not deterred Dubai in its quest to become a leader in global commerce and tourism. 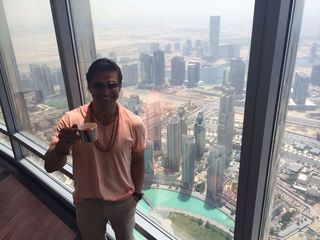 Dubai seems to have something for everyone, from world class shopping to some of the hottest club scenes anywhere on the globe, to roof top restaurants and bars that have an eagle's eye view of the city lights at night. Seven star hotels and water theme resorts like Atlantis adorn the city. The Dubai Mall being the largest shopping mall in the world has seven stories which include four levels of world class retail shops. With every designer label fighting for retail space, the Dubai Mall epitomizes the shopper's paradise. I had the pleasure of meeting the gracious Steve Cleaver, a true professional, who is the general manager of the prestigious Dubai Mall. He kindly gave me the VIP tour of this amazing shopping extravaganza. It truly is an eye opener for any American, (since we invented the shopping mall), which Dubai has taken to the next level. 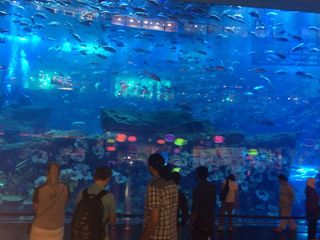 This is no ordinary Mall. It boasts the largest aquarium on earth that houses 33,000 individual fish, including 85 species and 400 sharks. The aquarium employs over 200 full time care takers to keep it looking pristine. You can even book a scuba session inside the tank to dive with the sharks and stingrays. Each segment of the Mall has a unique scent pumped into its air-conditioning system, creating the mood to fit the merchandise. The mall's designers have thought about every amenity to help adults shop in comfort, including a state of the art Kidzania. This is a unique children's "edutainment" center, where you can drop off your child, without worries while you shop. Finally, I walked past the almost perfectly preserved diplodocus dinosaur skeleton that looms over the circular entrance. Oh, its real and worth $75 million. If I sound impressed it's because the Dubai Mall is extraordinary and expanding in size as I write this. 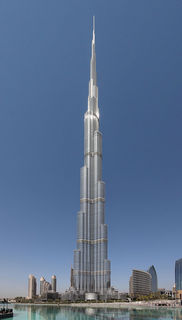 Exiting the Mall, I found myself outside witnessing the world's greatest fountain show in the shadows of the tallest man made structure on planet earth. The 2,717 feet tall Burj Khalifa is truly a marvel of modern architecture, a daring design by four American architects (Adrian Smith, William F. Baker, Marshall Strabala, George J. Efstathiou). Trust me when I say that riding the fastest elevator on the planet to the 124th floor, of the 200 story skyscraper, makes you smile like a kid. I got a sense that if it was not the biggest, tallest, fastest, rarest and most expensive it has no place in Dubai.

It is easy to assume you are on the set of Ridley Scott's sci-fi classic Blade Runner as you watch the sky metro skirr above the freeways and alongside the futuristic high-rises. The city sports a ski slope that is kept at a perfect minus 2°C (28.4°F) while the outside temperature exceeds 38°C(100°F) on most days. Dubai even makes its mark from outer space as the artificial island, known as the Palm Island Dubai, fans out into the azure waters, visible from the International Space Station. 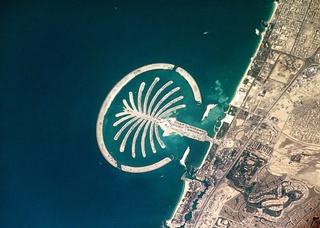 With all the outrageous distractions it is easy to forget you are in an Islamic country, until the tall minarets echo with the haunting call to pray, serenading Azaan (God is Great) from the mosques all over the city, summoning devout Muslims to mandatory prayer. Men and women have to keep some level of modesty in public, both in conduct and dress. Surprisingly, the majority of the population are not Emiratis, as you may imagine, but an international mix of Europeans, Asians and Middle Eastern people. Filipinos, Indians and Pakistanis are the manual workforce that makes up most of the population in Dubai. 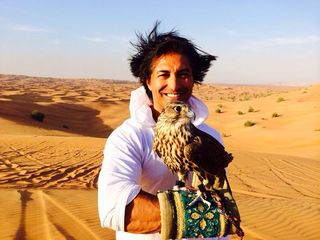 As I wonder how these nomadic Bedouins achieved this success so quickly, I realize the Emirates were different tribes of people who united, and through their unity they found a way to grow and be prosperous. I could not help but compare this Arabic tribal alliance with some of the Native American tribal alliances, like the six tribes of the Iroquois Nation, which brought power and prosperity to them. Dubai inspires all of us to follow our dreams, to have a goal and to follow it through, no matter the odds. I have to say I did enjoy my time in this modern, thriving city that is buzzing with excitement and potential. As a certain futurist machine once said...I will be back!