As Dubioza Kolektiv took the stage of a small performance venue The Cutting Room in New York City I was prepared to have fun, feel young (my boys at home with the babysitter, a rare night out with my spouse). I was prepared to share the band's energy that was pulsating as soon as they took the stage. Their unique blend of music and instruments transformed this small bar-venue into a performance that felt much bigger for the size of the audience that night.

Dubioza Kolektiv is a Bosnian band that consists of thirty-forty something year old men/boys who were transitioning into men during the bloody war in Bosnia. I seem to reminisce about the Bosnian war a lot lately. My birth country has been in the news a lot. It is a coincidence that the Dubioza's performance was scheduled for this weekend. I expected a fun night out, relaxing escape from work, the kids, meeting up with friends. What I got was much more. 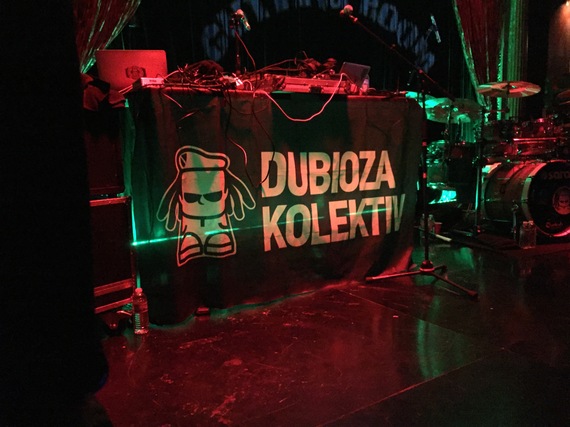 The evening made me somber, it made me think of the connections that all of us in that room (perhaps 250 people) shared. I realized that we were one lost generation, stuck in this void between the Socialist "good old days" of Yugoslavia and the new "Democracy" of the post war, divided Bosnia. We are stuck in this void, living in our adoptive country of America, wanting to escape the vacuum that we were placed in. Thirty-Forty-year-old generation of the 2016, listening to the political band like Dubioza. We were all high on emotions, this was the moment when we all felt understood.

Given the political situation of the American election year we are all feeling alienated already. We are refugees, mostly Muslim. We escaped the new Bosnia, divided, corrupt, sorry excuse for a political regime ruling the battered population. Dubioza could have been singing about Bosnia (they were), but they could have been singing about America or Europe. Their words "there is no free world only free market", their simple, yet deeply resonating lyrics about the Pirate Bay and the freedom of information sharing, corruption, obsessions of the new generation with material goods, skating through life with no real goals, these words were talking about Bosnia, but they were also translating into the way we live in America and Europe these days. Big corporations legally bribing politicians through lobbying, election campaign centered around hate, Islam bashing, us versus them rhetoric. Dubioza was singing about the bias of the Florance Hartmann's arrest and the European silence about the injustice. They were singing about the Trump's election campaign and shrinking middle class of America. They were singing about Europe and its selective acknowledgment of the diversity of nations and races that live on the continent in the twenty-first century. Lyrics of their song titled "Euro Song"speaking directly about the Bosnian status within Europe.

Auf wiedersehen miss Merkel, you are not my friend. When I tell you merhaba, you don't understand. Cantare Berlusconi, prostitution story, His libido running country, taking all the glory. If you wanna meet me mister Sarkozy, you will have to learn my language, parle-vouz gipsy. Don't want to be annoying, please don't get me wrong. I'm sick of being European just on Eurosong

At the end of the performance a signs were held up stating "Roses are Red, Violets are Blue, It's Time to Vote for the Socialist Jew". Clearly boys/men that grew up during the Bosnian war were nurturing memories of the lost life in Yugoslavia, seaside vacations on Adriatic coast, singing around the bonfires on the beach with someone playing a guitar, when college meant you complained about professors, you fell in love and enjoyed life not worrying about the strapping financial debt you might be incurring. To be young meant to be hopeful and look towards future with excitement of the unknown adventures. These men wanted all this back, they did not want to remember their twenties when even basic amenities were unavailable, electricity, water, bread, when you worried about survival, not about falling in love, being hopeful.

American's may be nervous about the concept of socialism, but the boys of Dubioza know better. They know that the freedom is not defined by the laws and ways in which you can make unlimited amounts of money. Freedom is defined by fairness of the government's treatment of all its citizens, healthy ones, young ones, old ones, sick ones. Freedom is defined by the ability to imagine the future where you can achieve your dreams if you worked hard, respected your fellow human citizens and if you were proud of your heritage.

Yet, they were smiling, praising "ganja" (slang for Marijuana), energized by the crowd's wild emotional connection to their lyrics. They did not give up. They were living, traveling the world, creating music that soothes our wounded souls.

Most of all, they were sending a message to the American and European Gen X crowd. Do not let the corporations, hate mongering politicians and seasoned liars take away even a sliver of freedom and excitement for the future. Future should be bright, given the technology we have, given the freedoms we have. Future should feel distant but oh so enticing.

In the end the crowd climbed up the small stage with the band. We danced to a love song. We hugged and smiled. We were all equal. Brothers and sisters in arms. 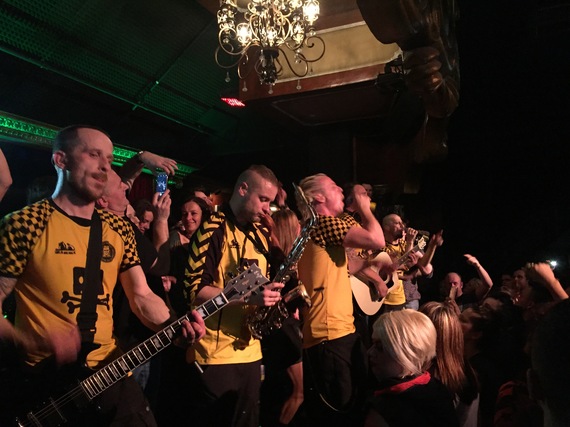