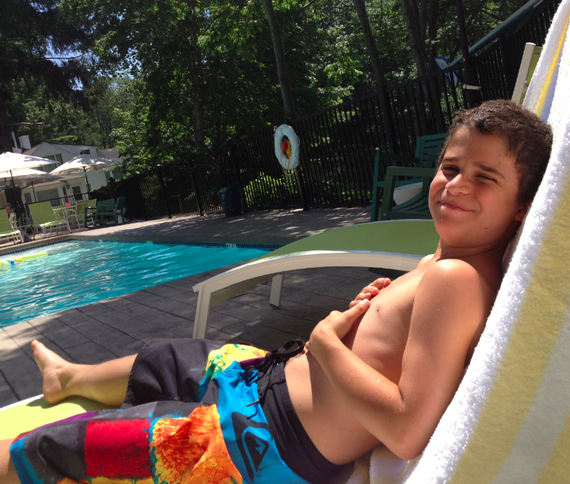 When my teenage son Charley was 3 years old, a nice doctor with a gentle smile handed him a death sentence. It was impossible to fathom, because Charley was a typically rambunctious, active toddler. He climbed on the furniture and wrestled with his brother and wrapped his arms around us and squeezed with all his loving might. But a rare genetic mutation caused Duchenne muscular dystrophy, a deadly muscle wasting disease that had silently begun destroying my little boy's seemingly healthy body.

Charley's muscles would weaken, and soon he would be unable to run and jump and play. Around adolescence he would become dependent on a power wheelchair. Complete paralysis would set in; only his eye movement would be spared. Around his mid 20s, Charley's heart and lungs would fail. This is the progression in every single case, every single time. There were some things I didn't learn from the doctor or my internet research, but I came to know as inevitable truths. Our family would be stressed to the breaking point. Siblings would struggle with feelings of guilt and neglect. The financial burden would be tremendous. Duchenne is a runaway train, wreaking havoc on everyone in its path.

Charley makes the most of the life he has. He joined the SkiWee program at our local mountain and played on a house league basketball team. But like clockwork, just as his friends were growing stronger and gaining abilities, athletics became impossible for Charley. So he learned to love cooking. Soon that will slip away too; already his arms are too weak to chop vegetables or stir batter. The ultimate heartbreak, the cloud that looms, is that we know what is coming. There's no chance of beating the odds. Every single kid is on the same well-documented path: excruciating decline and early death. One hundred percent of the time. No exceptions.

There has never been a treatment for this relentless disease -- until now. A new therapy is sitting in front of the FDA, awaiting approval. A group of kids has been taking the medicine for five years, and it has slowed their aggressive decline. Amazingly, this benefit comes with no discernible risk; to date not one serious side effect has been documented. This video (less than 30 seconds) explains the difference between children treated with eteplirsen and their counterparts who were not lucky enough to access the medicine.

Eteplirsen is not a cure, but in the children who have tried it so far, it hits the brakes on the runaway train. Just weeks ago, three dozen Duchenne experts sent a letter to the FDA urging approval of the drug. They describe the group of eteplirsen-treated boys as "clearly performing better than our collective clinical experience and the published literature would predict." Dr. Louis Kunkel, the scientist who discovered the cause of Duchenne 30 years ago, is not one to rush to endorse a new therapy. Of this one he says, "[I]t would be a travesty not to let patients have it."

Yet this drug is still waiting on the FDA.

I wrestle with what so many others also question: Something's not right. There's encouraging data. It's effective. There are no side effects. It's safe. The medical and scientific community support approval. The 2012 law known as FDASIA provides for accelerated FDA approval of promising new treatments for life-threatening rare diseases. So what's getting in the way?

The FDA officials who evaluate new treatments for Duchenne are stuck in a bygone era. Eteplirsen is a 21st Century treatment. It's a personalized therapy that targets a specific genetic mutation - brilliant, progressive science that never would've been possible before we mapped the human genome. Yet the FDA's Division of Neurology Products has repeatedly demonstrated an unwillingness to consider scientific methods appropriate for small patient populations that are racing the clock. A randomized, double-blind placebo-controlled study with hundreds of patients that lasts several years may be a good way to determine whether Viagra improves sex lives or whether Latisse lengthens eyelashes. But for children with Duchenne who face 100% certainty of deterioration and death, there are more efficient, more practical, and more ethical and humane ways to determine if a drug is safe and effective. By refusing to acknowledge that, our regulators are delaying access to this new medicine that has real potential to save legs and even lives.

These same FDA officials have failed to incorporate knowledge from specialized experts. In their letter to the FDA, the 36 Duchenne experts identified multiple errors and misconceptions in the official January 2016 FDA briefing document on eteplirsen. The team that prepared that document is led by an ophthalmologist who has no experience studying or treating Duchenne. As treatments for orphan diseases become a potential reality, our regulators must welcome and incorporate the most appropriate expert input to gain a better understanding of the disease and the patients they are supposedly serving. Lip service will not save my son's life.

Science has brought us to an incredible point: We have the power to save people -- including my own child -- from being killed by rare and specific genetic mutations. But this historic opportunity will slip away. We have already waited far too long. Eteplirsen works by coaxing the body to produce a shortened form of a crucial missing protein. Experts agree that the earlier a child starts this treatment, the better he will fare. Somewhere out there is a 3-year-old boy in the SkiWee program who just might not have to sit on the sidelines if the FDA does its job.

For Charley, it's too late to ski. It's too late to prepare a meal unassisted. But he can still deejay an amazing set, he can still passionately debate presidential politics, and he can still decorate his room with an uncanny innate sense of design. He could live a productive life into adulthood and make meaningful contributions to society. At the end of this month, a long-awaited meeting will be held to review the data, and the FDA must make a decision by May 26th. The emergency brake for the devastation of Duchenne is within our grasp. We know with 100-percent certainty that if we do not pull it, the casualties will be severe and catastrophic. By now the right decision should have been made; we have already sacrificed too much. Stop the destruction. Pull the brake. Save their lives.