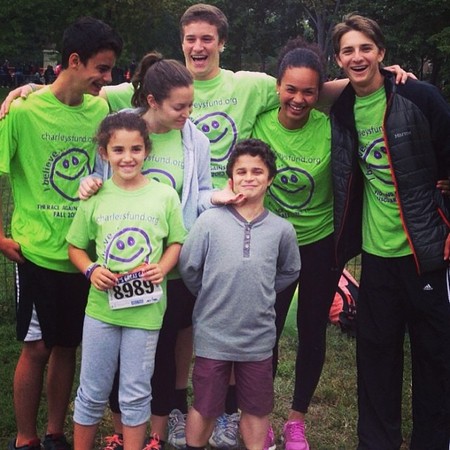 Charley with siblings and cousins

I'm not a politician, but I spent the entire month of March campaigning. Night after night, I stayed up until the wee hours trolling for signatures. I became frighteningly adept at Facebook and Twitter. I appealed to movie stars, athletes, gurus -- anyone who could help collect signatures. Shortly before 10 pm on day 27, the petition I was pushing hit 100,000 signatures -- the bar set by the White House to elicit an official presidential response. It was exhausting and it should not have been necessary. But you do what you have to do when your child's life is at stake.

My 13-year-old son Charley is a victim of Duchenne muscular dystrophy, the number one genetic killer of children worldwide. The disease is aggressive and 100 percent fatal. It robs children of their ability to walk -- usually by adolescence -- and quickly progresses until it shuts down all muscles, including the heart and lungs. Inevitably, Duchenne takes the life of every single one of its victims, most often in their late teens or early 20s. There is no FDA-approved treatment or cure.

How could a petition help this horrific situation? Miraculously, several new treatments for this hideous disease are showing promise in clinical trials. But scientific advancements alone will not get a medicine to my son in time to save his legs and his life. We need a vocal and sustained commitment from our government to make sure Charley and thousands of children like him realize the historic opportunity that lies within their reach -- to be the first generation ever to survive Duchenne.

In 2012, Congress passed and President Obama signed a new law called the Food and Drug Administration Safety and Innovation Act, known as FDASIA. The nearly unanimous bi-partisan legislation lays the groundwork to expedite regulatory review of drugs to treat rare and fatal diseases. Putting pen to paper to enact this legislation was an important and historic step in the right direction. But it is not enough. To save Charley's life -- to save this generation of kids - we need a strong commitment from the president and the entire federal government to ensure that safe and effective therapies reach children dying from Duchenne without unnecessary delay.

Our petition was sparked by a particular example of a bureaucratic holdup. A treatment called eteplirsen has undergone rigorous, long term testing in 12 boys. The results to date are remarkable, both in terms of safety and efficacy. Yet for 16 long months, the FDA did not provide clear guidance to the drug company on how to expand access to this safe and effective drug to all children who could benefit. So the Duchenne community waited. Almost three years after those boys started treatment, their muscle function and breathing ability have stabilized without any side effects at all. But they are still the only 12 children in the world who have access to this drug.

Shortly after we issued a press release announcing our 100,000 signatures, the FDA provided long-anticipated guidance to the drug company developing eteplirsen. Many children should soon be treated, faster than they would have if we hadn't organized and rallied and spoken out. But we can't hang our hats on one battle victory only to lose the war. Eteplirsen will help 13 percent of children with Duchenne, and it's a treatment not a cure. If we are to help all children with this brutal killer -- and the 30 million Americans who suffer from rare diseases -- we need strong leadership to sustain the progress.

By ignoring our petition, the president is missing a crucial opportunity to ensure that the FDA follows the law, cuts stifling red tape, and acts with urgency when lives are at stake. Recent revelations about the VA and the IRS are compelling reminders of the need for strong and decisive leadership to inspire government officials to follow the law consistently and proactively. Please, President Obama, get out in front of this one. We need your leadership. We need your commitment. We need your sense of urgency. And we need it now.

On March 27, the very day we reached 100,000 signatures, another petition on the White House's We the People website also hit the mark. Sponsored by Budweiser and promoted through a professional ad campaign, "Declare Major League Baseball Opening Day a National Holiday" has already been graced with an official White House reply. Meanwhile, Charley and hundreds of thousands of children like him all around the world are waiting for a presidential response, waiting for a commitment from the top. They don't have much time left.