Ready for yet another royal wedding?

Well, not quite royal, but it's close. Come fall, 85-year-old Cayetana Fitz-James Stuart, the Duchess of Alba and possessor of more aristocratic titles than anyone else in the world, will marry Alfonso Diez, making the commoner the Duke of Alba.

The Spanish aristocrat has 46 titles, according to Reuters, as she is a duchess, a countess and a marquesa several times over. Spanish Vanity Fair reports that her wealth is valued at an estimated at nearly $4.9 billion and when combined, her property is 170 times the size of Monaco.

But being such a wealthy and titled woman comes with pressures and the Duchess of Alba has been a tabloid fixture in Spain for decades.

After losing her first husband Luis Martinez de Irujo in 1972, the Duchess spent time with a variety of eligible male matadors and flamenco dancers and eventually tied the knot with the much-younger Jesus Aguirre, an ex-priest, reported People back in the Seventies.

At the time, the magazine called the unconventional union "the marriage that astounded Spain."

Now Cayetana has made headlines yet again for a third marriage, this time to Diez. The 61-year-old civil servant is 25 years younger than his well-heeled fiance, reports Reuters.

Beyond the couple's age gap, the controversy over their proposed union centers on Cayetana's children's disapproval. Reuters reports that the Duchess' son Cayetano Martinez de Irujo, the Duke of Salvatierra, expressed displeasure at having only met Diez three times, especially because he will become the Duke of Alba.

The Duchess told Hola!, "The tough part was that my children didn't understand and they got quite angry with me."

But the magazine reports that to allay her family's fear, she spent the summer dividing up her wealth, including palaces and artwork by masters like Goya and Velazquez, between her six children. By giving up her wealth in advance, she seems to have her children's support in time for her nuptials, planned for late September or early October, according to Hello!.

Check out a pic of the Duchess of Alba and her lucky man below. 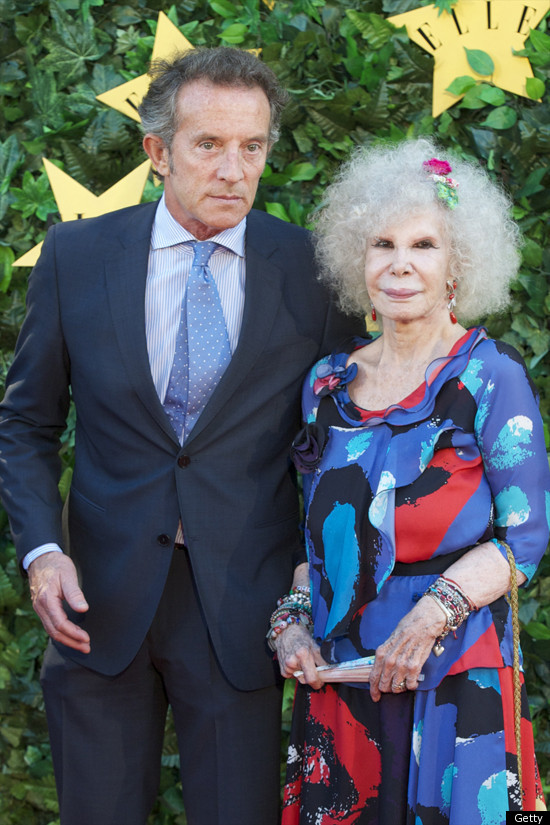 More:
StyleRoyaltyVideo
Newsletter Sign Up
An essential daily guide to achieving the good life
Subscribe to our lifestyle email.
Successfully Subscribed!
Realness delivered to your inbox