What has a mouth like a duck's and a comb like a rooster's? A dinosaur that roamed North America 75 million years ago.

A new fossil discovery reveals the duck-billed dinosaur Edmontosaurus regalis sported a fleshy comb on its head, similar to the ones on modern-day roosters. 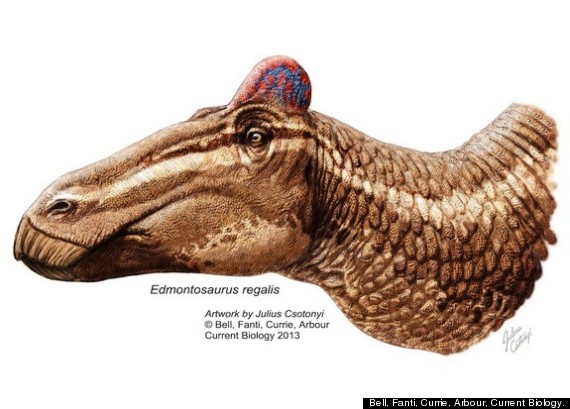 A reconstruction of Edmontosaurus sporting a fleshy "rooster" comb.

No such comb has ever been discovered before on a dinosaur.

"We're never short of being surprised by what these animals looked like," said study researcher Phil Bell, a paleontologist at the University of New England in Australia. [Paleo-Art: Colorful Images Bring Dinosaurs to Life]

Duck-billed dinosaurs, or hadrosaurs, were large herbivores that filled the same ecological niche as deer or kangaroo today. In the past century, paleontologists have discovered several hadrosaur fossils with skin impressions pressed into the rock around the bones. These "mummy" specimens, so dubbed because they reveal more than just bone, show that hadrosaurs had pebbly skin not unlike that of today's crocodiles and birds. 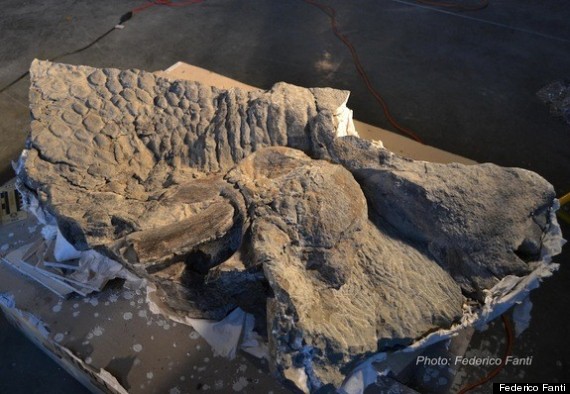 Bell's colleague, Federico Fanti, discovered the new E. regalis fossil in west central Alberta, about 45 miles (75 kilometers) from the town of Grande Prairie. They were surveying a well-known fossil site when Fanti noticed a string of vertebrae peeking out of a coffin-size boulder, Bell told LiveScience. The researchers had not found many bones still articulated in their original configurations, so they decided to collect the specimen.

"Because the block was too big to move on its own, we used a rock saw in an attempt to trim it down," Bell said. "But no sooner did we start cutting into it than we found the first skin impression. We kind of had to bite the bullet and collect the whole block."

It was seven months before the team could get to the site with a truck and trailer, because the nearby Redwillow River was so high. But in 2011, the researchers drove a truck across the river, winched the boulder onto a trailer and brought it out of the field.

While Bell was preparing the fossil, he discovered something even more amazing than skin impressions.

"Having a good idea of the outline of the animal, I put my chisel into the rock, not expecting to hit anything, and lo and behold, I realized I'd put my chisel straight through the middle of some skin impressions that shouldn't have been there," he said.

Bell had found a fleshy dome extending off of the duckbill's skull — something that had never been seen before. The dome included no bones and extended from the front of the eye sockets to the back of the head. It was almost 8 inches (20 centimeters) tall at its highest point and about 13 inches (33 cm) long.

"You can actually see the wrinkles in the skin that indicate that it had some flexibility to it," Bell said. 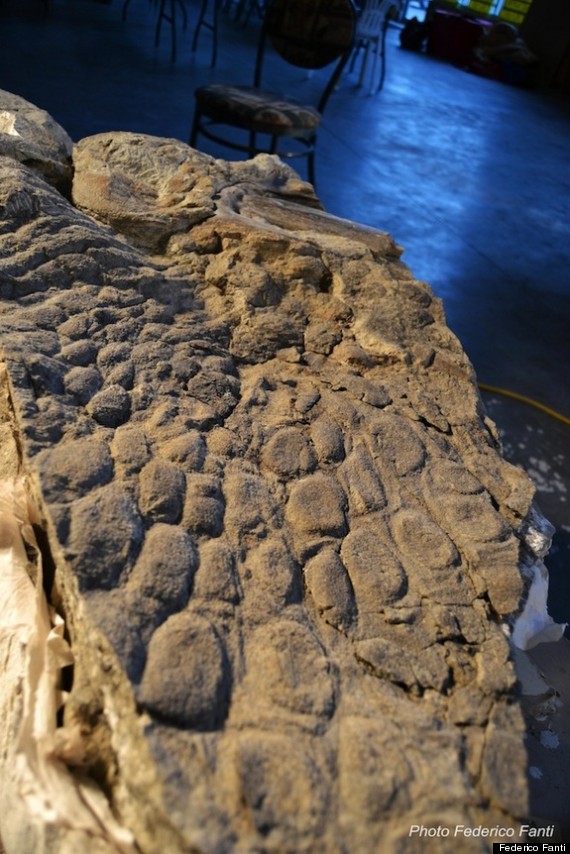 In modern birds, such combs are typically used for sexual display. They're found in both sexes in birds, so the presence of the comb tells researchers nothing about their dinosaur specimen's sex. The bones they do have belong to the neck and head, and don't reveal sex either.

"What we need to find now are additional specimens that show this structure, and perhaps by comparing their sizes or relative development, we might get an idea of their sex," Bell said.

It's not clear whether the comb is a feature only of E. regalis or if other duckbills might have had similar fleshy accessories. Skin associated with the head may not preserve well, meaning that other combs have vanished without a trace, Bell said. Or, they may have been overlooked. In the past, paleontologists considered skin impressions less interesting than bones, so they ignored them.

"People would actually remove and destroy the skin that's been preserved in order to get to the bones," Bell said.

Modern preparation has the potential to lead to a deeper understanding of dinosaurs, he said. "There's going to be no end of new and very surprising discoveries to come," Bell said.

The researchers report their findings today (Dec. 12) in the journal Current Biology.