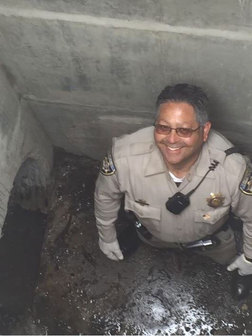 A California Highway Patrol (CHP) officer got the alert that there was a duck acting strangely on the side of Doyle Drive just off San Francisco's Golden Gate Bridge.

The officer went to investigate, and found a mother Mallard frantically flapping back and forth and quacking at her baby ducklings trapped in a drainage tunnel under the highway.

The officer and his partner immediately climbed into the tunnel and started rescuing the ducklings, even one that took off down a side tunnel, requiring considerable effort to retrieve.

Once all of the babies were contained in the back of the vehicle, the officers knew they needed to get them and their mother (who couldn't be captured) away from the highway and down to water.

A mother Mallard herds her family together by listening to their constant peeping, so the officers knew she would stay with her babies as long as she could hear them.

They lowered the windows of the patrol car so she could hear the high-pitched calls of the baby ducks, and then they drove slowly down toward the waterfront. 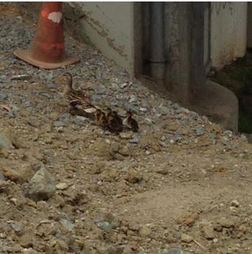 Gratifyingly, the mother Mallard followed the voices of her little ones and waddled the distance to the water. The officers stopped the vehicle when they reached a safe spot, and gently lifted the ducklings out of the patrol car. Once on the ground, the babies ran to their quacking mother, who shepherded them away. The officers drove away pleased that they had been able to save this little family.

But then they heard a distinctive "peep-peep!" from the back of the patrol car. One little duckling had gotten himself wedged under the car seat and hadn't been released with his siblings! The officers quickly circled back to the waterfront, but mama duck and her family were long gone. This fluffy duckling was now an orphan.

Fortunately, one of the officers knew about WildCare's Wildlife Hospital. 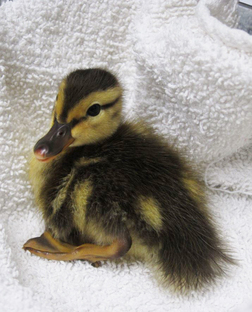 He gently tucked the duckling into the pouch of the saddlebag on his CHP motorcycle, and headed across the Golden Gate Bridge to bring him to our care. When they arrived at WildCare, the duckling was none the worse for wear after his adventure.

WildCare Assistant Director of Animal Care, Paulette Smith-Ruiz admitted the duckling to the Wildlife Hospital, all the time joking with the officer that the baby must be the smallest "juvenile delinquent" he'd ever had in custody.

Smith-Ruiz weighed the duckling and checked him for injuries. She then placed him in an incubator with seven other similarly-aged Mallard ducklings. At this time of year, WildCare can have over 100 Mallard ducklings in care, so our "jail bird" fit in just fine.

He and his new siblings spent the next months gorging themselves on Romaine lettuce and specially-formulated duckling mash. WildCare reminds readers to never feed ducks bread-- these birds need a varied diet full of leafy greens to stay healthy, and bread fills them up, but has no nutritional value. Click to read more about why feeding ducks human food is dangerous to their health.

Finally, after nearly two months in care, this duckling and his fellows were old enough to be released back into the wild. 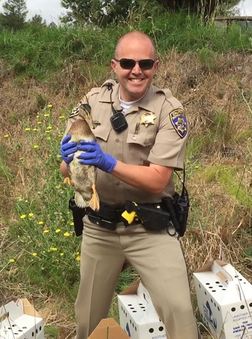 Release day was slightly overcast at the beautiful San Geronimo Golf Course in West Marin. CHP Officer Andrew Barclay arrived to help release the officers' rescued duckling. With the help of a golf course staff member, all the ducklings were released into a duckweed-laden pond.... where they sat. And ate.

When, after 20 minutes, the ducks were still happily nibbling weeds just a foot or so from the bank, the release group considered the release a job well done. Obviously these ducks were going to be just fine! With congratulations all around, they left the ducks to their new lives in the wild.