Around 2 p.m. on Wednesday, Harald Olsen, a Korean translator looking for work -- "casualty of the sequester," he says -- thought he was about to go home after having lunch with a friend.

Instead, he and three other people helped escort a family of ten ducks a mile through downtown D.C.

It all started as Olsen was "walking from the World Bank building to the Farragut North Metro station," he says. "I was heading home after lunch. One benefit of unemployment."

He was waylaid by a mother duck and her nine ducklings, attracting attention in a park on Pennsylvania Avenue -- some admiring attention, and some concern; as Olsen wrote on his Reddit post of the photos, one person called the police, and another called the Humane Society.

But before the arrival of any authorities, the ducks got moving. "Kind of like water flowing downhill, the ducks knew which direction they wanted to go," says Olsen. Four of their admirers followed.

Walking about "two to three" miles per hour, Olsen says, "we began at the intersection of 18th and Pennsylvania Ave. NW, then went stright south on 18th until we ended up at the duck pond" just north of the Reflecting Pool on the National Mall. A slow pace for the humans, but "the ducklings were going flat out, as fast as their webbed feet could carry them."

Along the way, bystanders stopped the group to take pictures. A security guard "in front of the Department of the Interior jumped out of her booth and laughed, saying it reminded her of pet ducks she had when she was young," Olsen says.

The four duck escorts, for their part, tried to keep the ducks from being smooshed or otherwise injured on their adventure, delaying the birds when a car was coming, helping the babies over the curbs and shooing them away from the road.

"We were most concerned about a duckling slipping down a storm drain," says Olsen. "So one of my fellow escorters made sure to recount them -- 9 ducklings -- every time they passed a drain."

Having ushered this troupe of feathered Washingtonians to safety, Olsen says he'll be sure to visit them next time he's on the National Mall. And he could, in fact, be making those visits for years. As one of the many heart-warmed Reddit commenters noted, "You should be happy to know that this" -- duck families making their warmer-weather homes in D.C. -- "is an annual occurrence!!!"

(This video from last year of ducks being helped across Pennsylvania Ave. seems good proof not only that the ducks are usual inhabitants, but that they have a lot of human friends. Here's another, of police helping ducks onto the White House lawn.)

Another Redditor had a different observation: "This is very cool! But I can't help but imagine DC police sarcastically saying 'yea, ducklings, we'll get right on that'" -- a concern HuffPost brought to D.C. police spokesperson Gwendolyn Crump, who said not to worry, that "Animal Control would handle."

H/T DCist -- which is where, in the comments, we also saw the word "SQUEE-questration." In this case, we'd say that sequackstration would also be appropriate. 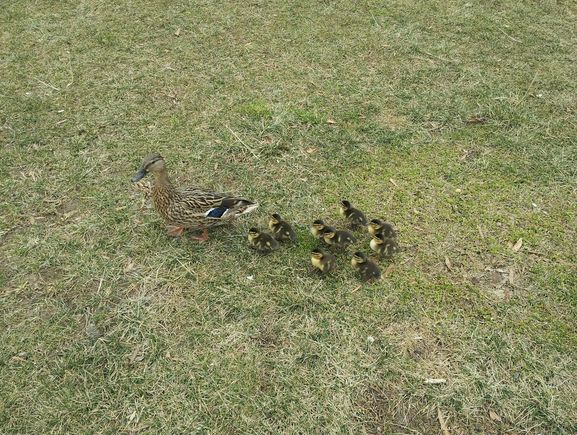 1 / 9
<a href="http://imgur.com/a/IWdEM">Olsen's caption</a>: "Spotted a mother duck and her nine ducklings in the park across from the World Bank building on Pennsylvania Avenue."
Harald Olsen

Ducks Walk Through D.C. With A Four-Person Escort (PHOTOS)
Animals In The News