In case you haven't noticed, it's a whole new game at the Hollywood Bowl. Thank you, Mr. Camerman. Thank you for pointing your equipment at what everyone wants to see on those big screens at the mammoth showplace: the man of the moment, Gustavo Dudamel.

Of course it would take a dunderhead to ignore the magnetism our L.A. Philharmonic music director exudes and not let the hordes in on his irresistible way with the players and the music. It would take a lamebrain to keep pursuing the old standard of panning rote to each orchestra section as it plays its featured few bars before turning for seconds to the podium-meister, who shapes the whole - yes, the whole -- of what we hear and, therefore, should get maximum viewing time. 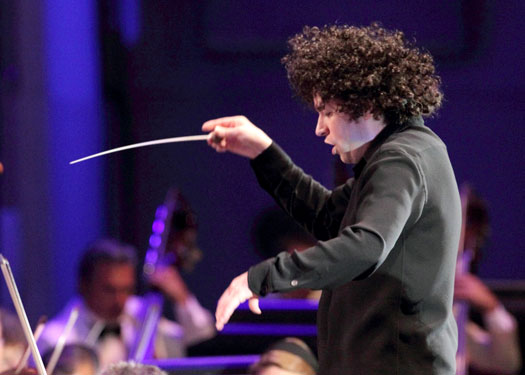 So successful and audience-gratifying is this updated camera strategy with its new angles and protocols that I wonder if the Philharmonic might not think of instituting it in Disney Hall too -- where, so far, only those in the less-than-optimal seats behind the orchestra get to see Dudamel wield his wondrous baton.

Even from far, far away, up in the Bowl's outer-reaches, with the sky still not quite dark, a person in front of me nudged her neighbor and murmured "there's the guy," as he unceremoniously strode onstage, without a spotlight, wearing black pants and black shirt for his Carmen concert performance. That seat-holder couldn't think of his name but she sure knew he was "the guy" and not some stage hand.

Whether she also knew how special he is hardly matters - because his celebrity drew her to the grand amphitheater. And he and the orchestra gave that listener, as well as the 13,000 others of us, what for.

Dudamel, himself, simply loves the music.

He shows it over and over. Here, in Carmen, which I have seldom heard played with so much warmth, fluency, lilt and delicacy - along with the plangent swelling surges, fast and powerful on the exciting dramatic accents - he did just that. Even the composer's juxtaposition of the calvary march against the Seguidilla came across with brilliant irony. Never mind the few, small lapses of coordination with the singers (not much rehearsal time here).

If there is an opera score that can stand alone, without a staging, this is it. The music can creep into the coldest heart. Its melodies, sweet , its drama gut-busting, Carmen is Bizet's most treasurable gift to the world. Dudamel and the glowing Philharmonic know it.

Probably the international singers, who varied in artistry, sensed it also. But the titled femme fatale, Natascha Petrinsky had her shaky moments - both as to pitch and vocal agility. Her Don José, Yonghoon Lee, dispatched his smoky tenor with a soft ending to The Flower Song, as the composer wanted, while Kyle Ketelsen, as Escamillo, actually hit his treacherous low notes dead on in the repeat. Alexia Voulgaridou, as Micaëla, sang with pleasing assuredness. The choruses, melding with the orchestra, were fabulous.

From high up in the nose-bleeds, though, where two tickets can set you back $80, the screen titles could barely be read.

Down in the boxes, for Dudamel's third night at the Bowl, everything on the Jumbotrons was much clearer. And, in his white jacket and bowtie, he even served as charming narrator for those unknown items on the cleverly chosen song-and-dance bill. Call him the next Lenny, giving, well, not a Young People's Concert, but a just-as-engaging edu-tainment for adult revelers.

It was summertime programming that ignored the evening's chill. What's more, he made it an occasion of infectious fun. First, with Bernstein's Divertimento, short pieces ranging from jaunty to aggressive to melancholy and expertly showing off the composer's love affair with cross-rhythms (absorbed from his love affair with Brahms' music), his adulation of Ives and his harkenings to Sousa at the Boston Pops, where he grew up.

But just in case you didn't know it before, Dudamel is the Marcel Marceau of the bandstand and, arguably, there is no better interpreter of this music and the South American works that followed.

He told us about Villa-Lobos' Little Train of the Caipira from Bachianas brasilieras, how it stirred the composer's reveries of the Brazilian rain forest and the sound of that train gently chugging through the dense, lush terrain. He told us how easily and naturally Villa-Lobos composed, the way Mozart did, (the way Dudamel conducts, with the music coursing through his body). And then he made us hear it as described.

With uninhibited pleasure he next explained the milonga and tango pieces, one based on a young girl's flirtation with an old guy, the other as "a man planning to woo a girl with a slow simmer," adding, "enjoy your wine" while listening and imagining. His winks, his shoulder shrugs, did their own dancing and cued the players masterfully.

Besides the program's best-known entries, Falla's Three-Cornered Hat Suite No. 2 and Ravel's Bolero (what else?) there was a winsome guest artist, Isabel Leonard, whose acting gifts matched her lusciously light-voiced mezzo as she sang Falla's Seven Popular Songs to stunning effect.

But just after the printed closer, Bolero, Dudamel sprang his surprise: a galvanizing rendition of "Tico Tico." Forget that he'd been born decades after the Xavier Cugat-Carmen Miranda era - his spirit brought them back and the exuberant crowd went Tico Tico-ing into the night on an infinitely rhythmic Cugie-Carmen wave.