It's always hot; it's a land of laconic sun-drenched vacations. So why are there not more locally made beers in Florida?

A state like Colorado has around 140 microbreweries while Florida has only a sad 16. These dozen or so producers are distinguished from contract brewers (like The Abbey on the Beach) and brewpubs (such as Coral Gables' Titanic) who have limitations on how and where they can sell their beer.

Beer lovers with locavore inclinations have had a short list of Florida microbreweries to rotate through: Florida Beer Co. in Melbourne, Tampa's Cigar City Brewery, and Tequesta Brewing Co. But thankfully this sudsy beverage wolf pack has recently grown by one.

Due South Brewing recently opened in Boynton Beach and with their taps showing up all over town (see the full list of where to buy/drink it here), HuffPost Miami spoke with Due South brewmaster Mike Halker about craft brews in South Florida (and the lack there of).

Halker recently moved down to South Florida from North Carolina, where he owned and operated a bar and grill.

He started brewing in a 15,000-square-foot warehouse on Industrial Way and High Ridge Road and last month, he opened a taproom.

There, in the midst of a Palm Beach industrial park, South Floridians can get a taste of Halker's Category 3 IPA, a 6.1% ABV "Florida-style IPA" derived from his award-winning homebrew recipe, and a Honey Vanilla Wheat that uses over 100 pounds of Florida honey per batch, among other site-brewed varieties.

How does beer culture in Charlotte, NC differ from that in South Florida?

Charlotte embraced craft beer earlier so there was more availability of brands, bars devoted to craft, etc. Florida was behind the rest of the US as far as craft is concerned but is catching up at a fast pace.

Why did you move south?

My wife and I lived in south Florida years ago and knew we wanted to come back one day. We realized that opening a brewery would mean putting our feet down permanently and it was our opportunity to return to paradise and work on putting our dream together.

What's your background? Have you attended any brewing courses?

I have no formal education as far as brewing is concerned. I learned to brew from books and sweat. Brewing the same beer over and over again is a great way to learn how small changes can greatly affect your beer. It forces you to do research and figure out why things are happening which ultimately makes you a better brewer and produces better beer.

Why do you think there are not more craft breweries down here?

Since there wasn't much craft beer available here, there wasn't much demand for it. As availability increased, so did the appetite. Now that there's a customer base, a brewery becomes a viable business. As I said, we've been behind for some time now but you'll see that changing soon.

Do you use any local ingredients in your brewing?

We try to keep things as local as possible. We try to source things like our honey and our espresso from locals. We're brewing a beer now using mangos from a tree in my backyard. In addition to trying to use local ingredients, our spent grains go to feed horses and cattle in west Delray so we do attempt to keep the circle as green and local as we can.

Which beer do you usually recommend to drinkers new to your brewing?

We have a couple of beers that we call 'transitional'. Our Caramel Cream Ale and our Honey Vanilla Wheat both are light and easy on the palate. They're very flavorful beers, but less than 5% in alcohol and easy drinking. Lots of people come in the brewery and say, "I don't like beer." One of these two will usually change their mind.

What are you long-term plans for the brewery and taproom?
We are a production facility so most of our plans are for expansion of the brewery. We hope to increase production over the next one to two years to be able to supply most if not all of the state of Florida. Considering we're only five weeks old right now, that's probably ambitious enough.

Tell us about your next beer in the works.

We'll be releasing our Southbound Brown. It's a great American Brown Ale. We use quite a few different malts so the flavor is fairly complex. It's a very nice beer to pair with light desserts like cheesecake or mousse. Oddly enough, it also pairs great with pasta and red sauce.

Which other Florida craft brews are you a fan of?

I'm on the Board of Directors for the Florida Brewers Guild so I'm a fan of most of the beer made here. We always have one or two beers from other Florida breweries in our taproom. When we were working on putting our brewery together we did get some great feedback from the folks at Tequesta Brewing Co., Cigar City, Bold City, and Big Bear so it means a lot to support those guys.

Are their any flavor trends in local Florida beers?

I think the trend is toward making beer that is to be enjoyed in the warm climate we have here. It's certainly possible to make a light, refreshing beer and still have lots of flavor. Our Southern Saison is a great example of this. Lower alcohol levels, lighter body, and easy drinking will get more and more popular with the craft brewers in places where it's always summer like it is here.

Click through the below slideshow for shots of Due South's brewing process and facility: 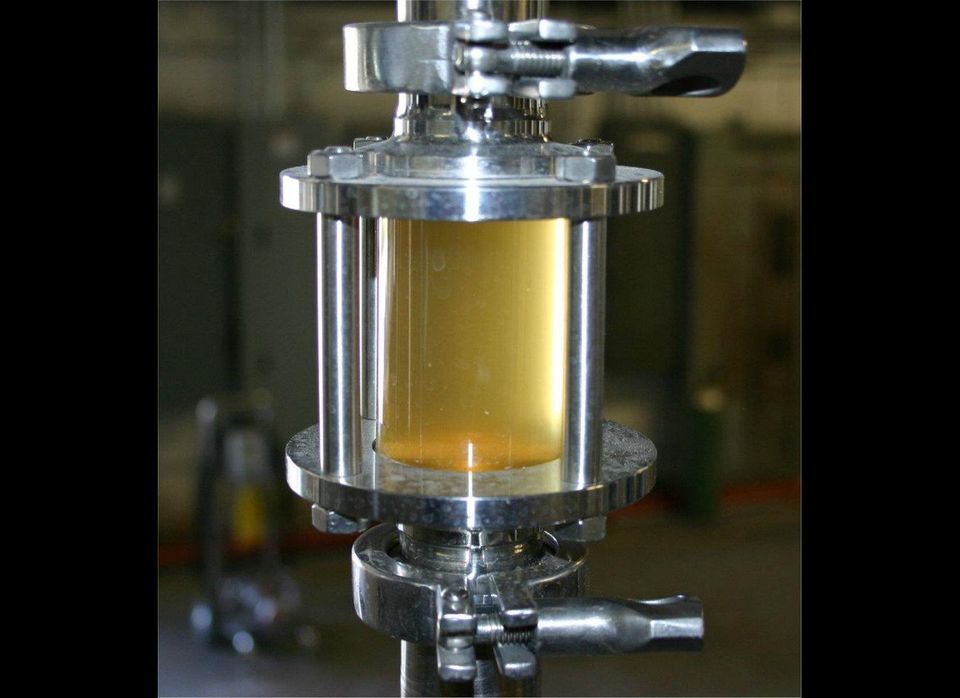 1 / 13
Due South Brewery
The Honey Wheat through the sight glass as it goes from the mash to the kettle.