Duke President Richard Brodhead sent an e-mail to students Monday addressing the "wildly distorted" popular image of the college and urging them to "face up" to the elements of student culture that are "less than ideal."

"This has been a Fall with a lot of odd events catching the public eye and events that are really so different from the Duke that we ourselves experience every day," Brodhead wrote, referring obliquely to events such as Duke alumna Karen Owen's infamous sex-ratings PowerPoint, Duke senior Justin Robinette's claim that he was ousted from the Duke College Republicans for being gay and crude Duke fraternity e-mails that referred to women as "sluts."

According to the Duke Chronicle, Brodhead seldom sends e-mails to the entire campus. This missive marks the first time he has addressed this fall's controversies, which have been covered extensively on this website and elsewhere.

What do you think? How can Duke change its culture? Weigh in below.

The full text of the e-mail: 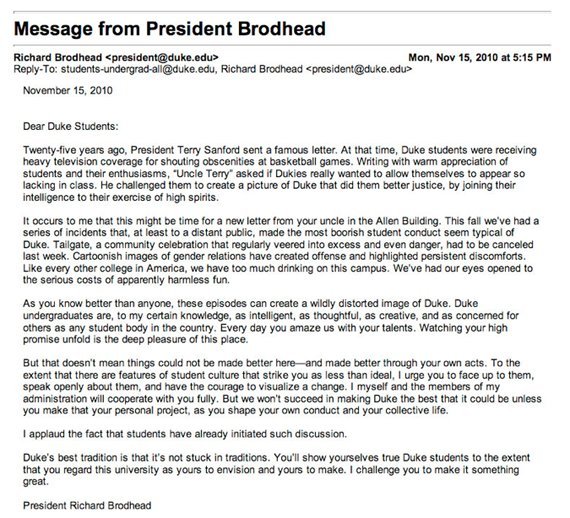