The fall is always a stressful, nonetheless exciting time for most high school seniors, notably as they prepare and submit applications to colleges and universities. After coordinating their letters of recommendation and completing standardized tests, ambitious applicants fine-tune their personal statements and tackle mountains of supplemental essays. However, many LGBTQ high school seniors struggle with the added burden of determining the best possible way to present (or not) their sexual orientations and gender identities.

Sexual and gender minorities, like me, must weigh a variety of factors in considering whether or not it would be appropriate to "come out" in our applications. What if the admissions counselor that reads your application is homophobic? What if they think you're "too gay"? What if you're not gay enough? These resounding and overwhelming "what-ifs" ultimately lead many college-bound LGBTQ seniors to withhold their identities on their applications.

This phenomenon manifested itself at my school, Duke University, this spring. With the goal of connecting LGBTQ admitted students to campus LGBTQ resources, the Office of Undergraduate Admissions began "flagging" applicants who disclosed that they were "out" on their applications. As the president of Duke's undergraduate LGBTQ student group, I was provided with these names and enthusiastically awaited the opportunity to communicate with these students about all of the resources that make Duke a leader in LGBTQ life. I was quickly disappointed, though, when I realized this list only yielded 6 students, out of the nearly 4,000 who received acceptance letters this past year.

Aware of the limitations of this "flagging" approach, Duke is doing something about it, making history all the while. This fall, when over 30,000 high school seniors are expected to complete Duke's application, they will come across a new optional essay question:

"Duke University seeks a talented, engaged student body that embodies the wide range of human experience; we believe that the diversity of our students makes our community stronger. If you'd like to share a perspective you bring or experiences you've had to help us understand you better--perhaps related to a community you belong to, your sexual orientation or gender identity, or your family or cultural background--we encourage you to do so. Real people are reading your application, and we want to do our best to understand and appreciate the real people applying to Duke."

Applicants may be particularly surprised by the words "sexual orientation" and "gender identity," in the midst of this question, and with good reason. This addition now makes Duke the fourth university nationwide, and first among all Common Application institutions to make explicit mention of sexual orientation and gender identity on the application for undergraduate admission.

In doing so, Duke has made it clear that in order to gain a complete and holistic picture of its applicants, admissions officers will now consider sexual orientation and gender identity as important pieces of a candidate's background, just like race, gender, religion, ethnicity, and age. LGBTQ applicants will benefit from answering this question because it provides a space to safely disclose their identities while minimizing concerns over the stigma that comes along with "coming out" in a college essay. While most students do not identify as LGBTQ, the mere presence of this question sends a powerful message to the Duke community about diversity. 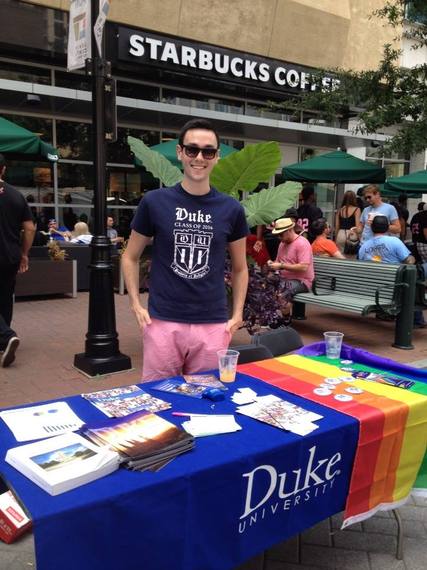 I am particularly excited about what this means for next year's incoming class. From the time they apply, all students who enroll at Duke will be aware of its commitment to diversity in many forms, which includes sexual orientation and gender identity. I am proud of my university for making such a strong statement about the importance of diversity not only to the campus community, but also to the broader world of higher education.

In our changing cultural climate that surrounds LGBTQ issues, it's time to begin to understand the dynamic definition of diversity. As it stands now, Duke inquires applicants about all historically marginalized identities in the form of check boxes, except sexual orientation and gender identity. This double standard suggests to me that LGBTQ demographic information may be better logged via a check box. Nonetheless, the question in its current form represents a significant step in the right direction.

Therefore, I hope to continue to work closely with the Office of Undergraduate Admissions to evaluate whether this question serves its purpose of equitably meeting the needs of LGBTQ applicants. I look forward to other colleges and universities following suit by making more explicit their commitments to sexual and gender diversity on their own applications.