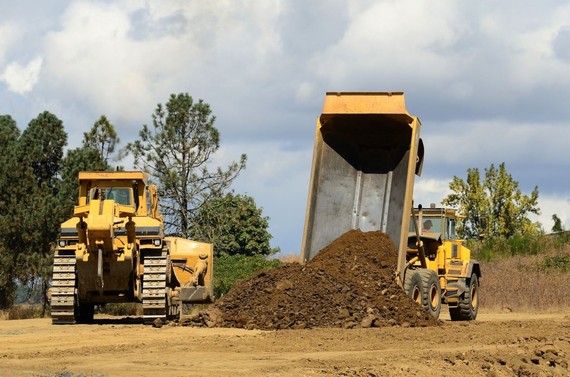 Dump trucks were developed in Western Europe during the 19th century. The Galion Buggy Company and others introduced them into the United States in 1910 and they have been shaking kidneys to jelly ever since. Smaller dump trucks have a carrying capacity of 3-4 tones but they are being steadily upstaged by super dump trucks which can carry a heaping 26 tons. Since super dump trucks can haul so much, the drivers' can make less trips and theoretically save fuel and time. The driver just waits till the truck is full enough, then unloads it at their time and choosing, burying the unsuspecting dump site which never sees the light of day again. Many leader/managers do the same to unsuspecting employees.

The dump truck management method is a tragic drama starring an ill-fated employee who believes things are going very well and his/her irritated manager who fumes that the employee cannot read his/her mind. Blunder after blunder, gaffe after gaffe are loaded into the manager's emotional dump truck until critical mass is reached and the employee looks up from his/her desk to see the dump-truck's rear gate swing open.

Despite its tried-and-true popularity, the dump truck management method is being progressively expunged from company policy and procedure manuals but many leaders find that there is just something tantalizing about pulling that dump lever... Leadership book after leadership book stresses the importance of finding people doing things right, of dealing with problems as they arise rather than the banzai attack of the annual review or during a probationary tenure. But that doesn't end the temptation to load the dump truck and now that they have supersized them...

Most leaders, if they are honest with themselves find that they have become ninjas with the dump truck management method. It's like a mental colonic that finally clears everything out. But does it work? Certainly it doesn't work for the employee. Most often the unsuspecting employee is broadsided by bad news and leaves hurt and stunned. Many managers conclude the discussion with dumping-remorse.

There are numerous reasons why it is tempting to use this ultimately ineffective method. Here are three common reasons:

So really the dump truck is pretty effective at building highways but at odds with effective leadership. Effective leaders deal with issues in a timely fashion, maybe you could call it the wheelbarrow management method. This method allows the employee a chance to improve and the leader can go home at night without having the employee's issues on his/her mind.

What's the secret for keeping the dump truck on the construction site and not in the organization? The secret is for leaders to do a few things consistently. Here are seven leadership activities that work:

Most employees want to succeed at work. Most leaders want to do the right thing. If managing leaders are consistent and timely with feedback, the dump truck stays home and everybody wins.